If the comedy of subjection asks “how fast?” the comedy of dysfunction asks “how broken?” and exploits the very slipperiness of web design and programming — the way the web browser and computer screen subvert the best intentions of digital creators to make their products look good and run well. In the early days of the web, graphic designers had to learn quickly that their beautiful Illustrator or Quark creations had a variable appearance when accessed on the web — each browser rendered colors, tables, and other aspects of the design differently; of course, there being screen sizes as small as 800×600 in the day, some computers crunched the most sublime constellations of text and image into barely recognizable mélanges of color and text. In addition, JavaScript and Java, the languages of choice for basic interactivity, had to be debugged across several platforms. Things have changed since Web 2.0, in which cross-platform technologies like Flash and WordPress have rendered some of these concerns moot, but nonetheless the possibility of dysfunction — due to hackers, for example, who can replace the front pages of even major websites with misinformation and garbage — remains a steady concern of artists keen on exploiting our increasingly distant relationship with the concreteness of print. 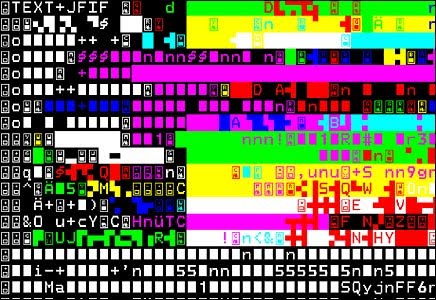 Screencap of some madness by jodi.org.

The first artist in my series of commissions, Jason Nelson, can be said to belong to this group who opt for the relatively ugly and baroque over the clean and functional, though in fact most of his pieces work efficiently, the dysfunctionality confined to the graphic design, narrative, and other artistic elements. A more salient example would be the work of the art duo Jodi.org, composed of Joan Heemskerk (the Netherlands) and Dirk Paesmans (Belgium), whose works play directly on the fears of users/viewers that their machines have been hacked. Most of their text is confined to the Courier rendering of the ASCII character set, and is often conveyed in classic pre-Windows green, and thus seems to thrust you deep into the belly of the operating system, the same place you go when having to do “safe” reboots of your virus-addled laptop. Even worse is when one of their pieces sets off a script that fills your screen with tiny, leaping and bounding browser windows that open and close at will, such that you actually do not know how to shut the piece down (which is, uh, annoying). Jodi have recently gotten into making game mods, taking such classics as Wolfenstein 3D, Quake, Jet Set Willy, and Max Payne 2 and “deconstructing” them to take on the most lucrative form of programmed narrative head-on.

A category of early digital text art was “codework,” which basically involved the creation of digital “creoles” that appeared to be a form of English after it had been corrupted by the language of code — the very language that is guaranteeing its continued presence on the computer screen. The artist mez (Mary-Anne Breeze) concocted a language she calls “mezangelle,” and wrote most of her work directly for art listservs and usenet groups to be read in “real time” back in the day when engagement in the virtual agora — the public square — was still something of a specialized activity. Other artists, like Alan Sondheim, coiner of the term “codework,” poured seemingly computer-generated texts, many of them pointing to some erotic but highly theoretical engagement with a cyborgian playmate, into such listservs, while Talan Memmott, best known perhaps for his large-scale piece Lexia to Perplexia, brought a graphic element to his codework, making all elements — the interface, text, and graphics — an assault on the user’s very confidence in the apparent divorce between human and machine. A variation on codework is the oeuvre of the mysterious Toadex Hobogrammathon, consisting largely of two ventures, the blog Dagmar Chili and Name: a novel, both of which can move between moments of beauty and apparent literary competence to excruciating, if still engaging, Dada gibberish. 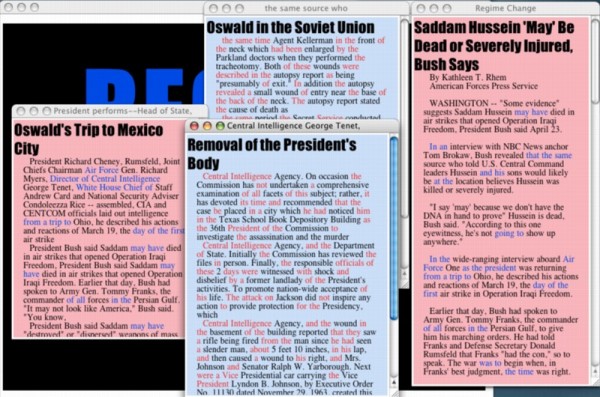 Works that engage in this “comedy of dysfunction” bear some relation to the Situationist practice of the détournement, which involves taking elements from pre-existing art or text works and combining them to create a new work with meanings not related to those of the original elements. A true détournement is not merely a “mash-up” — which is often created for comical effects, or if not, for effects of conventional beauty, such as the great Grey Album — as the détournement is, at best, a targeted message, even a piece of propaganda. Noah Wardrip-Fruin and David Durand’s two pieces, “Regime Change” and “Newsreader,” are good approximations of what an automated détournement machine might look like, as they collage news stories on the web concerning (what was then the new) war in Iraq and link them together using n-grams to create new texts, not unlike with the “cut-up” method of Brion Gysin, which, in William S. Burroughs’s description, was intended to make anyone a poet using the most mundane, everyday materials. The politics of these two pieces might not involve more than the liberation of the reader from the over-determination of commercial news sites, but nonetheless the gesture is interesting. “Semantic Disturbances” by Andreas Jacobs, a series of single-screen text/art collages; Bjorn Magnhildoen’s “PlainText Performance,” a simple piece that sends a single page of weird conceptual text dancing on your screen; and poet Charles Bernstein’s visual essay “An Mosaic for a Convergence” are three other projects that bear some relationship to codework and détournement.

The key issue with these works is not merely to “deterritorialize” or estrange — that is, make weird — language usage, a practice familiar to readers of avant-garde literature of the last century, but to cripple (or suggest the crippling of) the functionality of the machine as it is actually in operation, a Luddite gesture akin to tossing a wrench in the cotton mill. There’s a payoff in the confirmation, via dysfunction, of the ontological certainty of the physical apparatus, rendering tangible how naturalized we’ve become to the digital prosthesis. In this sense, the true predecessor of this group of artists might be Jean Tinguely, many of whose kinetic sculptures were created specifically for self-destruction before the viewer. 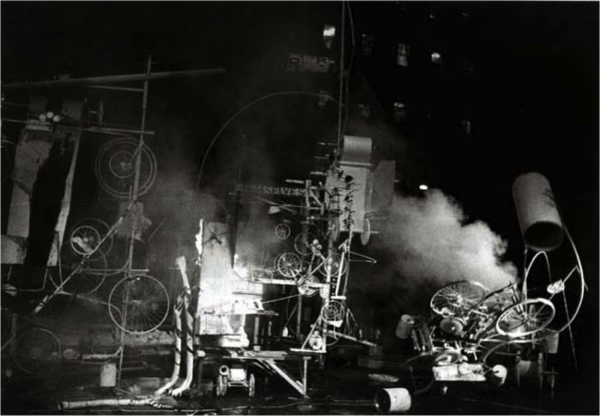