Third Hand Plays: "Repeat After Me" by joerg piringer

The Austrian artist joerg piringer is unique among electronic writers in that he not only has an impressive resume as a performer — he is a long-standing member of the Vegetable Orchestra, whose members play exclusively on fresh vegetables they purchased and carved into instruments that very day, and has developed several text/sound pieces for live-VJing in clubs — but he is also an accomplished programmer, having created his own programming languages for his increasingly complex work. piringer has also created several popular iPhone apps, including “Gravity Clock,” which animates time as a series of micro-destructions, and “abcdefghijklmnopqrstuvwxyz,” which is a fun adaptation of several of the concepts he developed in his sound poems. Closing out this list is piringer’s work in video, electro-acoustic research, hardware, and installation, and his inclusion in several print and CD anthologies of poetry.

Taken as a whole, piringer’s work takes the basic premises of the concrete poem (an example by Eugen Gomringer to the right) into the nth-dimension, which is to say far from the page and into any media available today and to come. He has realized more than anyone the potential for poetry, once free of the basic print/publish dynamic, to occupy any number of channels of communication, especially as they’ve proliferated since the mid-20th century. Eugen Gomringer’s term for what he believed concrete or visual poetry should be was “constellation,” a playful object which would give the poem an “organic function in society again.” While concrete poetry itself, when confined to the page, sometimes seemed rather mute and trivial compared to, say, the grand structures of Paradise Lost or “The Waste Land,” piringer’s work has acquired a scope that earlier concretists could only envy.

Gomringer writes in the essay “From Line to Constellation” (1956): “The constellation is the simplest possible kind of configuration in poetry which has for its basic unit the word, it encloses a group of words as if it were drawing stars together to form a cluster. / The constellation is an arrangement, and at the same time a play-area of fixed dimensions. / The constellation is ordered by the poet. He determines the play-area, the field or force and suggests its possibilities. The reader, the new reader, grasps the idea of play, and joins in. In the constellation something is brought into the world. It is a reality in itself and not a poem about something or other. / The constellation is an invitation.” In a slightly later essay, Gomringer makes explicit the sort of connections between poetry and research that piringer realizes: “Concrete poetry, in general, as well as the constellation, hopes to relate literature as art less to ‘literature’ and more to earlier developments in the fields of architecture, painting, sculpture, industrial design — in other words to developments whose basis is critical but positively-defined thinking.”

“Repeat After Me,” the second in the series of commissions I’ve made for the SFMOMA blog, is the latest node in piringer’s explorations into networked poetry (you can even Tweet your creation), electronic sound generation — the letters you type become attached to their phonemes, though with a decidedly European inflection — and visual poetics. Enjoy! 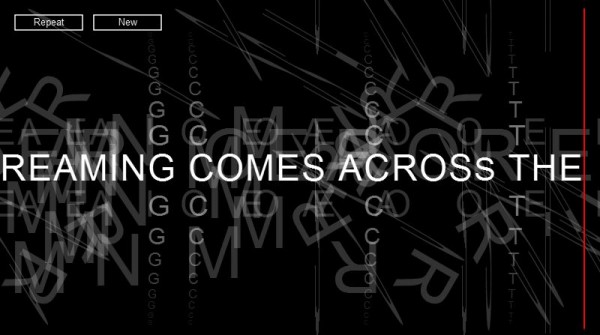 “Repeat After Me” by joerg piringer.

joerg piringer was born in 1974 and currently lives in Vienna, Austria. He is a member of the Institute for Transacoustic Research and the Vegetable Orchestra (Das Erste Wiener Gemüseorchester), a student at the Schule Für Dichtung in Wien (Curd Duca, Sainkho Namtchylak, etc.), and a sound poet. He holds a master’s degree in computer science.