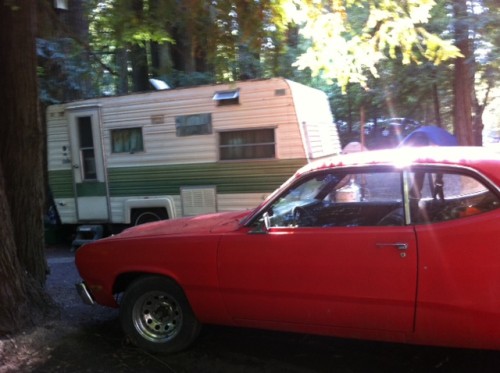 A Robert Bechtle moment at the campsite

At this patriotic season, I have to admit, I’m more loyal to California than the U.S. of A. It is, after all, the blue state where I was born (the San Fernando Valley), and those sun-baked Fourth of July’s of my childhood — KFC and Shasta cola in Shoup Park for fireworks — are dry roasted into my memory bank. Barefoot, faded paisley bedspreads unfurled on brown crabgrass at a city-funded recreation area that right about now is probably facing serious service cuts, if not all-out closure. The memories aren’t erasable, but the sites themselves seem worse for the wear.

I spent part of this Independence Day weekend on a canoeing trip down the Russian River. It would be a more ironic spot if the Cold War were raging, but at this point, the burg seems more influenced by an egalitarian American spirit — the RR is a bit on the low-rent side, that’s part of its appeal. This was a group effort. There were nine of us who’d originally planned to do an overnight to get an early start, though I was a little sheepish about camping at Burke’s, the canoe-renting establishment where we were renting our boats (and instead attended a 25th anniversary dinner in celebration of writers — and SF Open Space bloggers — Dodie Bellamy and Kevin Killian, who hosted 25 artists, writers, and friends at a North Beach Italian joint) and made a day trip of it. We non-campers started off early on Sunday morning to get to the river before the queues. 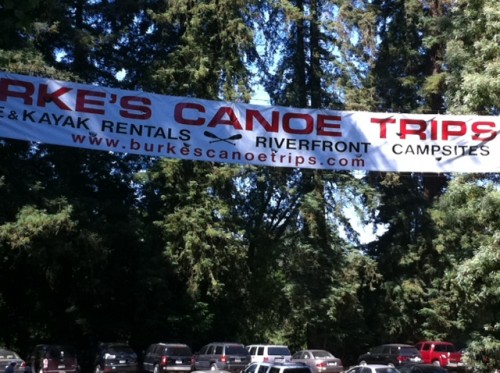 The brave souls who broke out their tents, an international group that included a German, a Dutch, two Americans, and fittingly, a Ukrainian, reported a rather populated car campsite and a wild, noisy night full of thumping drum and bass, a loud birthday party, what may have been a game of strip poker, and overheard sundry meth chatter. This patch of land is home to a good number of semi-permanent residents. At 9 a.m., when we arrived, we wandered past a Korean Christian folk song circle, all night party people whose campfire was still smoldering, a pink Cinderella mosquito net hanging from a pine tree, and a host of tan young Californians loading up Coleman coolers for a scorching day on the river. (Later that day, we observed a Jehovah’s Witness consultation, and I met a tan, middle-aged woman outside her Prowler-brand RV festooned with Tibetan peace flags who told me she’d lived there for three years — “A tree fell on my house, and you can’t beat the view,” she flirtatiously explained.) When we got ourselves outside the canopy of pines to the canoe disbursement line, the temperature, even at this early hour, signaled summer. The Northern Europeans were endearingly fond of sunscreen. 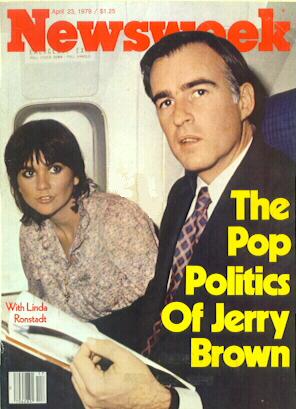 It was a great day on the water, canoeing, dodging predatory kids (and adults) with Supersoakers and water balloons, diving into the murky but still refreshing Russian River. But it was made even more memorable by the fact that while we waited to be issued our boats from stern Burke’s employees, we spotted our governor, Jerry Brown, dressed in black yoga-ish attire, carrying a coffee cup (alas, a disposable one). This unlikely celebrity encounter — Did he camp here in this scrappy setting or did he own a house nearby? Was he renting a canoe along with the rest of us? — was all the more surreal as it seemed like only we recognized him. “Go, Jerry Brown!” one of our group exclaimed. He looked back at us like a deer in the headlights, perturbed at being recognized. Apparently this wasn’t a media moment, which made it all the more wonderful: The guv puts his austerity budget, which just passed, where his mouth is. Doesn’t he fly Southwest? (Arnold, we surmised, was entertaining his other family on the private jet.)

During Brown’s first time in office, I’d go with friends to Lucy’s El Adobe, the Mexican restaurant across the street from the Paramount Studios on Melrose, a funky eatery where he legendarily shared a tuck and roll booth with Linda Ronstadt — tostada tête-à-têtes. Back then, he was one of us, albeit with canyon rock glamour. There were signed black-and-white glossies on the wall to notarize their presence. And here he was again, sans pop star date, in an equally accessible location. His presence probably doesn’t mean much (who wouldn’t enjoy paddling on a summer day?), but it made me particularly proud to be a Golden State native. Sure, we’re broke, but the sun is still shining, and we’re all going downriver together, making the most of the ride.