Five questions to SFMOMA artists, staff, or guests. I was lucky enough to catch up with these two ladies while they were in town from London. They were in California for a youth and kids marketing conference in San Diego, and they popped up to SF afterward. Sharna Jackson lives in London and is the editor of the Tate Kids website for Tate Gallery. Sarah Toplis, also from London, is the editor of the website Young Tate Online, which is part of the Tate Gallery. 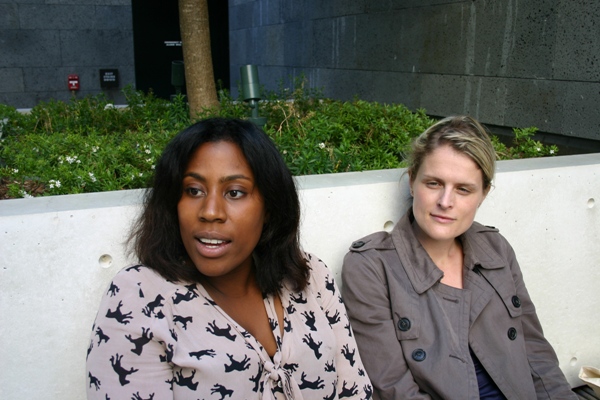 Sarah Toplis: Bits of paper, which is quite funny because I work with digital things, but I have a lot of unnecessary paper in my life. I’d like to collect photography.

There’s the generic interview question that goes, “If you could invite anyone to dinner, who would it be?” What I want to know is, what would you serve?

SJ: I was having this conversation with a friend the other day and we decided we would invite Dan Savage, he’s an agony uncle, a really quite rude one, and I’d serve him spaghetti and meatballs. Or haggis.

ST: Probably Spike Milligan, because he’s amazing. I have a thing about nonsensical writing, or anything that’s completely bonkers is a good thing to have in your life. Having dinner with him would be weird. What would I give him, though? Something really gross. I’d give him trifle.

SJ: I might steal Louise Bourgeois’s Maman, the big spider. Alice Neel’s The Family. Can I have two? I’d have some Joseph Beuys, as well; I’d have Schlitten (Sled). But you’d have to have a mansion; you’d have to own the Tate.

ST: Anything by Hannah Starkey I would like to steal. I wouldn’t mind a Gursky. A couple of Man Rays maybe. I’d just go on a stealing spree of photography, I think. That’d be lovely.

SJ: Sometimes I listen to pure cheese. Oh, the other day I was listening to … I can’t put that on the SFMOMA blog or I’ll die. I was listening to Enrique Iglesias and Nicole Scherzinger. You know when you hear a song in the morning and then it’s in your head, you have to hear it to get it out? Normally I listen to Girl Talk. Let’s stick with Girl Talk. That’s what Tate Kids should listen to.

ST: I like all different types of music, anything from jazz, disco, to a bit of dubstep, and I listen to radio a lot. You can’t beat a bit of BBC radio 4, it reminds of me of my childhood.

SJ: You should have asked me about my brand new game that I launched today! It’s called Airbrush, and you paint with your webcam so you can dance in front of a webcam and paint at the same time.

ST: I should talk about my website, really, shouldn’t I, but I want to say we should talk about Where’s Wally, because I just got over-excited about the fact I saw a Wally on top of the building opposite SFMOMA. Are there more of them all over the gallery?

[There are 3 that can be seen from SFMOMA!]

Visit Tate Kids for art projects, films, games, e-cards, and so much more. I could get lost in there for hours. Young Tate is an absolutely great initiative for young creatives and students. Jealous.