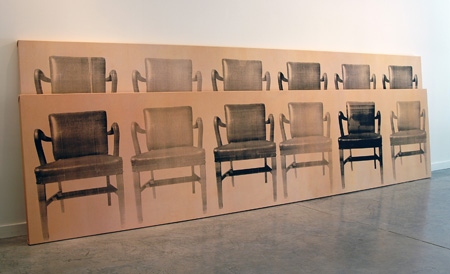 In a previous post I blogged about being detained for jury duty for the first time and the peculiar sort of conceptual art that unfolds in the courtroom. At this point, my service is complete; a decision was made. I’m at liberty to discuss the details, which were, to my surprise, notable enough to be reported in a compact Yahoo News item that a friend forwarded. Reading that, I couldn’t discern the implications — was the award excessive, or insufficient? Being there myself, I still don’t know the answer to that question. Browsing the reader comments reveals the extent to which news is distorted by media spin, by the sketched out details that complete stories through our own peculiar biases. Not that this is such an important civil suit, but being in the courtroom, I witnessed a narrative fleshed out ad nauseam, with a massive but controlled flow of information that formed an elastic fiction of a very real event. (You could apply the same idea to the Ai Weiwei scenario, a tale that just got murkier with a reappearance cloaked in restriction.)

Here’s my account of the case to which I was assigned: Ms. E drank something troubling, a crystal clear bottle of water with its Harrah’s label intact. It may have been standard transparent plastic, but was corrosive all the way down. She described burning up inside, but not as dramatically as her lawyer, who also relished, in words and sometimes pictures, the horrors of esophageal surgery — they could remove her gullet and move up her stomach, he told us, with added hand gestures tracking his round belly, tucked firmly into suit jacket, and moving his palms up to just below his tie. His expression pantomimed choking. Imagine the fragrant burps, he might have said, but we all were anyway. It helped to have a CGI version of the odorless, tasteless liquid sloshing and burning down the fleshy cave of her insides, like some kind of biotech raging waters attraction at Disney California Adventure.

Mrs. E, or Miss. E, as the defense alternately referred to her (was that a strategy or lightheadedness?), didn’t need to get so drastic with the gastric. Ms. E settled for something less surgical, yet equally perverse — swallowing a three-foot long rubber tube to stretch out the scar tissue that blocked the flow. Of course, there were differing descriptions of the thing she had to “shove down” or simply insert down her throat, ripping, tearing, or gently stretching her wounds. Her side submitted a pointy blue one made out of hard plastic, while the other side got a medical expert, a Richard Dreyfus-in-younger-days-looking man with a command of all matters of the throat, who said it was softer and more pliable than the one that was constantly brandished in the courtroom.

It all seemed like a glossy TV show — a CSI/ER weekly series. The scene of the crime a set: The California Bar. They spell it out in the cursive letters of swag sold in a John Wayne Airport gift shop. Surveillance cameras caught the action from numerous angles in abraded video form. Was it ironic or merely clever that the bar exists not in CA, but in Nevada, where law is more sympathetic to sin? Lucky for Ms. E there was a nurse, and her ex-cop husband, sitting a couple stools to her right watching football. Their kind souls and professional expertise were life saving. There were lots of salacious details: Ms. E’s mysterious companion, PTSD, a spooky bartender who seemed to have slow acting synapses (on the job as well as on the witness stand), hints at family drama, and a new age church in Marin.

All was easily digested as fiction, and I wanted to approach it as such. As I sat hearing the same gastrointestinal facts for the fiftieth, increasingly boring time, I deconstructed the system from a cool, intellectualized distance. Yet when it came to the point of awarding the poor woman some cash in the jury room, I was surprised by how quickly the conceptual angles fell away. I panicked at the thought of attaching a literal price to pain. What might be the real costs of a Drano cocktail, in PTSD dollars? It was as if there was a short circuit in my thinking patterns — all of a sudden, this was capital R real. Unlike forming a critical position on the Gertrude Stein exhibitions, our decision would have some measurable impact on someone’s life.

I volunteered to be the foreperson as my own, fairly healthy gut told me I’d resent ceding control to anyone else on this panel, many of whom were rather quiet. Who could predict that they would be so resistant (or resentful) in the realm of compensation? (The plaintiff was asking for $12 mil.) I never expected to be one of the more empathetic and generous members of the jury — we were not the majority. I thought Ms. E seemed like a reasonable woman, and she was fighting a casino corporation with defense lawyers as irritating as her own (though oddly, with less polish).

I implored the others in our closed room to consider that the one million bucks, the most popular compromise award amount, really isn’t much in today’s dollars — could be a single painting or maybe a portion of a modest San Francisco home. And was I the only one who didn’t balk at the request to fund a couple hundred sessions with a shrink? I had to admit to the group that I’ve been to mine more times than that, albeit at a lower price point, and for far more benign traumas. The major ones take time.

So it was a merger of mind and body, of the belief in the tales told. I felt a powerful sense of anxiety in my gut when we brought the decision — that $3.2 million in medical expenses and noneconomic damages, pain and suffering past and future. The story I told myself was that this was inadequate. I felt guilty for not trying harder to bargain people up, but the more pressing reality is that everyone had their own firm opinion, and a self-interest in getting back to our lives, our jobs, our diversions. I found the experience surprisingly complicated, even profound. As an embodied form of conceptualism, it was better than any work of art I’ve experienced in ages.