I Choose for You: Ishan Chooses for Meg (Part 2)

I don’t drink coffee, so let’s have a beer … My posts are always collaborations and are presented in two parts. Part 1 is a summary of a shared experience with my collaborator(s). Part 2 is a response, often in the form of a project created specifically for this blog.

I met Bay Area artists Cheryl Meeker and Ishan Clemenco at Suppenküche in Hayes Valley for beer, grub, and a great chat. When our foxy German waiter came to take our order I felt adventurous and asked for a random beer that sounded interesting — which ended up tasting like moldy smoked meat. He simply whisked it away saying, “I choose for you.” He expertly chose my beer, my meal, and the theme for our collaboration! Cheryl, Ishan, and I chose works in the SFMOMA collection for each other to respond to according to parameters set by each selector. Breaking with my traditional two-part post, this collaboration will come in four entries.

A Short Manifesto
by Stanley Brouwn

When science and art are entirely

melted together to something new

when people will have lost their

remembrance and thus will have

no past, only future.

When they will have to discover everything

every moment again and again

when they will have lost their need for

…. then they will live in a world of only

sounds and movement will be free.

Bay Area artist Ishan Clemenco asked me to go to SFMOMA and look at the following works: Meret Oppenheim, X-Ray of My Skull (1964, printed 1981); Stanley Brouwn, My Steps in Torino: The total number of my steps in Torino 16,827 (1971); Bruce Conner, Prints (1974); and Constantin Brancusi, La Negresse Blonde (1926). Then he sent me some information on Dutch artist Stanley Brouwn (b. 1935), including: “A Short Manifesto,” written by Brouwn in 1964; a 2005 Modern Painters review of a retrospective exhibition featuring works from 1960–2005 at Micheline Szwajcer in Antwerp; and a page from an exhibition catalog that simply states, “In accordance with the wishes of the artist, no details of his life and work shall be published. At this moment Stanley Brouwn is at a distance of x feet from this point.” I was to then create a text in response, and here it is …

After spending time with the various works and the texts on Brouwn, what struck me was that small and miraculous revelations emerge through the process of reduction, which involves time in various ways. We’re so familiar with the evolving visual vocabulary of reduction in modern and contemporary art, that I think we tend to take it for granted now. Although I could wax on about Oppenheim, Brancusi, and Conner (which I just did and then erased), I want to focus on Brouwn because I knew very little about him before this exercise and am now captivated by his persistently focused practice and his insistence on as much anonymity as the art world will allow. At SFMOMA, Brouwn’s work is currently on view outside the Anna Parkina exhibition. It’s in a nowhere space — a transitional spot incredibly easy to overlook as you leave one gallery and enter another, although it’s smartly positioned directly across from Conner’s Prints. Considered or not, it’s in a spot where most will walk by it, which is poignant considering Brouwn’s practice. Inside the vitrine is an open notebook with a single small notecard inside. In handwritten ink it asserts, “My steps in Torino. My total number of steps in Torino 16,827. S Brouwn ’71.” His media boils down to a measurement of distance gained through his action, and the record is as simple and humble as the action itself.

How do we measure and regard distance and what significance does geographically based distance play in our post-millennium world? Brouwn measures distance with his body — the sb-foot, the sb-ell and the sb-step. Brouwn walks. This is the primary way he has measured the world for 40+ years, and I think his actions are perhaps more meaningful today than ever. When I walk I generally have a coffee in one hand, I’m talking or texting on the phone, my purse is on one shoulder, and some additional bag of research material or stuff for my son is on the other. I’m barely cognizant of my surroundings let alone what I’m doing at any given second. It’s a blur of multitasking and anticipation of getting to the office, or getting home, or getting my kid to school or … BUT, my office is down the block from the SFAC Gallery and one day last year I decided to be fully aware of my walk, so I counted, and it took 759 steps from door to door. It was as if the world stopped spinning and simply ground to a halt while I did one simple thing from point A to point B not so far away. Since then, on days that are particularly stressful I find myself counting as I walk to and from the Gallery. 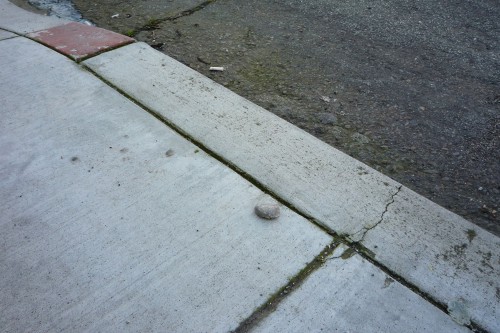 I want to parallel Brouwn’s work with a recent project by local artist Julie Cloutier for SFAI’s 2011 MA Collaborative exhibition Transit /// Stasis: Negotiating Movement in the City. (Disclosure: I’m the instructor of this yearlong practicum class.) The students commissioned a new work from Cloutier, along with four other global artists, and presented the projects in a publication and exhibition this past spring. The theme of the exhibition centered on art and its intersection with urban modes of transit. 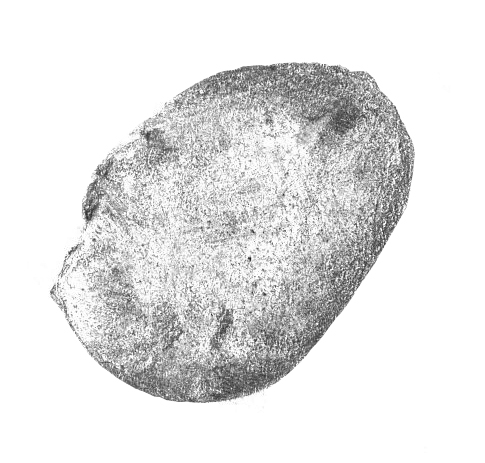 In a panel discussion with the artists from Transit /// Stasis, Cloutier described the process of creating her work for the exhibition. She spent time on her daily walks looking for small rocks of interest in a variety of locations. Most notably, she spoke about how she would leave her house with every intention of collecting rocks, but within blocks she would be distracted by her daily activities. She would forget to focus on the small things between her and her destination. After a series of rocks were collected and mapped meticulously, she set about creating a pencil on paper portrait of each rock. These lovely, detailed drawings were then set back in the exact location the original rock was collected. The drawings were simply left on the ground – perhaps a present for others who might allow themselves to look down and see a tiny revelation. 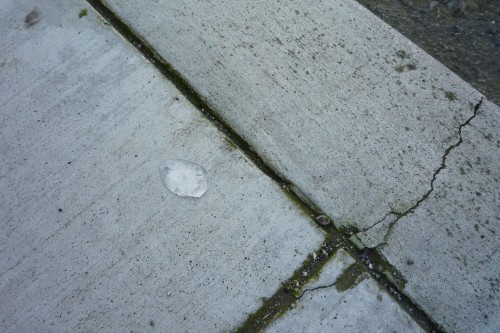 Tune in to your surroundings and tell me one tiny, miraculous thing you encountered or experienced today.