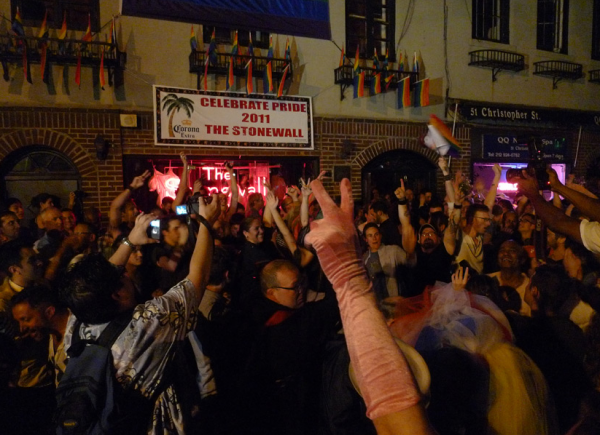 June 24, 2011: Hundreds of New Yorkers gather in downtown Manhattan outside of the Stonewall Inn, the site of the 1969 Stonewall riots that played a big part in the formation of the gay rights movement in the U.S. The crowd was celebrating after the New York State Senate passed a marriage equality bill, paving the way for same-sex marriage to be legalized in the state. Josh Marshall for Talkingpointsmemo.com.

When I was 14 I thought everyone was straight. So when I heard that Andy Warhol was gay, I freaked out. I mean, how did that happen? The teacher never mentioned it in my high school art class. But when I heard that Cy Twombly was also gay, I freaked out a little less. Then I heard Edward Albee was gay. OMFG! Then I heard a whole lot of artists and writers I liked were gay — Robert Rauschenberg, Jasper Johns, Frank O’Hara, Tennessee Williams, Annie Leibovitz, Rimbaud & Verlaine, John Cage, and even Michel Foucault for god’s sake! They were all GAY! GAY! GAY! But like Andy Warhol used to say, “So what?”