There are so many things to see in The Steins Collect, it would be unreasonable of me to suggest you notice things that aren’t there, or are only there in photographs. So if you go, go ahead and look first at Picasso’s Gertrude and Matisse’s big blue nude, Renoir’s sun-dappled lady and Cézanne’s compelling apples. Then please lean over a vitrine — or, back home, toward your monitor or over the catalogue — and look closely at this little photograph. 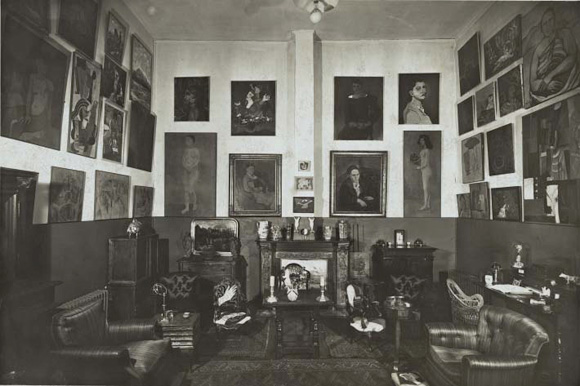 This is the atelier at 27 rue de Fleurus, where Gertrude Stein lived with Alice Toklas (and originally with her brother Leo), in 1933 or 1934. Beside the fireplace, beneath Cézanne’s portrait of his wife and Picasso’s portrait of Gertrude, are two small wood-and-tapestry chairs, one facing forward, one turned to the side. On the back of the chair on the right, under Gertrude, is a suggestion of the corner of a picture frame. The left chair, below Madame Cézanne, bears the image of a hand. Whose hand?

Several hands made these chairs. First, whoever made the frames, in Louis XV style, maybe in the 19th century; then Alice Toklas, who worked the covers in petit point around 1930; and, in between, Pablo Picasso. Gertrude Stein, playing Alice, told this story in The Autobiography of Alice B. Toklas:

That lovely little painting [a 1918 depiction of a guitar, on view in The Steins Collect] he copied for me many years later on tapestry canvas and I embroidered it and that was the beginning of my tapestrying. I did not think it possible to ask him to draw me something to work but when I told Gertrude Stein she said, alright, I’ll manage. And so one day when he was at the house she said, Pablo, Alice wants to make a tapestry of that little picture and I said I would trace it for her. He looked at her with kindly contempt, if it is done by anybody, he said, it will be done by me. Well, said Gertrude Stein, producing a piece of tapestry canvas, go to it, and he did. And I have been making tapestry of his drawings ever since and they are very successful and go marvellously with old chairs. I have done two small Louis fifteenth chairs in this way. He is kind enough now to make me drawings on my canvas and to color them for me.

The chairs themselves aren’t in The Steins Collect; they stayed at home, in the archives at Yale. But photographs can hint at the wit, beauty, and utility of Toklas’s stitching over Picasso’s drawing. And, looking closer, maybe we can trace some of the threads that tie together Picasso’s kindly contempt and Toklas’s patient work, entangling the genius and the wife of genius, roles that Gertrude Stein parodied and took very seriously. Here sits a collaboration between a certified Modern Master and a woman who, for all the unconventionality of her life, always played the part of housemistress and amanuensis, cook and seamstress to Gertrude’s genius. Now, a woman’s tapestrying might mean different things — see, for one, Pae White — but in these chairs, between elbow-worn arms (which, the Autobiography tells us, Ezra Pound once fell out of), art and domesticity are literally woven together, inseparable. 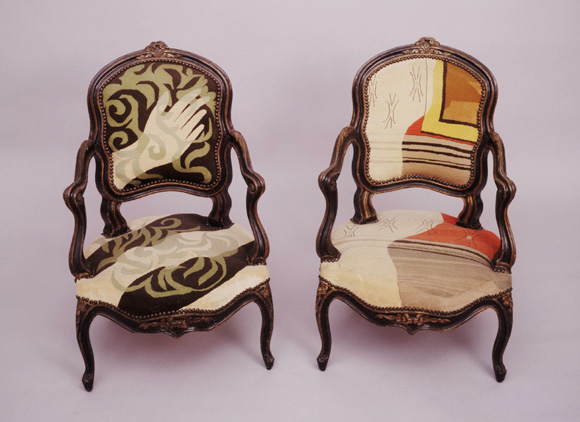 It’s in the fabric of The Steins Collect, this interweaving. The show pieces together stories about families and friends, personal connections and fallings-out, and what those things have to do with art. The photographs of the Steins’ rooms witness not only the quality and density of their collections but the fact that what are now museum pieces were once domestic objects, parts of private lives. Yes, on Saturday evenings the Stein apartments were practically public spaces: anyone who knew someone could visit rue Madame to worship at the altar of Matisse, or rue de Fleurus to sit among Picassos and geniuses and wives. But after the at-homes, Sarah and Michael and Leo and Gertrude and Alice were at home, living with these paintings. And these chairs.

The desire to live in proximity to art is one of the impulses that draw some of us to museum work — a misguided impulse, maybe, and not just because you could work at SFMOMA without ever setting foot in its galleries. On good days a museum may be full of life, but (despite best efforts) it isn’t a living room; sooner or later, you have to go home. That’s where I am now, and probably where you are, too. Maybe, sitting there among the people and things you live with, you’ll think a little of Alice Toklas at her tapestrying. Or maybe you’ll just turn to your own canvas.

Juliet Clark is a freelance editor and writer and a sometime SFMOMA staffer; she proofread the catalogue for The Steins Collect. Like Alice Toklas, she is “fond of paintings, furniture, tapestry, houses and flowers and even vegetables and fruit-trees.”

Tags: Exhibitions, Guest Writer, jclark, juliet clark, One on One