[On Thursday, May 12, Open Space and Art Practical hosted the last of three conversations organized loosely around issues and themes raised by Stephanie Syjuco’s multiartist project Shadowshop, which closed May 1. We’ve been tracking the discussions in a number of posts here, and if you haven’t had a chance to look at some of that material, I invite you to do so here. Today, artist Helena Keeffe responds to the final conversation.]

What are the economic realities for artists? This was the central question framing the final Shop Talk discussion at SFMOMA on May 12th. It’s a complicated one. There are so many parallel realities and different kinds of artists. Cheryl Meeker, Lara Durback, and the collaborative team of Sean Fletcher and Isabel Reichert each presented their take.

Meeker’s practice is a permeable overlap of the worlds of art and activism. The work she engages in operates outside of the market-driven system and often directly questions and opposes it, such as in her collaborative work Capitalism Is Over! If You Want It.

Durback runs NoNo Press and is a writer and letterpress printer with an extreme commitment to using salvaged resources in her work and life. She talked about using only free and recycled material as a strategy for economic independence. She also touched on her involvement in a project which was eventually revealed to be the experimental marketing tool of a large corporation (causing her to leave the project due to mistrust of the true motives driving it).

Reichert and Fletcher delivered a PowerPoint presentation fit for a board meeting (think hard-hitting statistics accompanied by animated pie charts), but with a message intended to debunk myths surrounding the economic realities for artists. I could spend the rest of this post trying to summarize the information-packed presentation, but I am told they will be making it available here online so I hope readers will check it out when it comes available. What most stands out for me in retrospect is their assertion that artists should embrace the two-job lifestyle and that until we begin making art that has real value in the greater culture we will be unable to convince others that we should be compensated for our work.

Rather than simply recap the conversation that followed these presentations I would like to add to this sampling of survival strategies with one of my own. The email thread posted below is an exchange I had with a gallery. Although I have passed up opportunities like this before, this was the first time I decided to let them know why I was not applying. It’s not that I think they care whether I apply or not but rather a way of acting on my belief that it is absolutely essential that artists advocate for what they want rather than spending energy lamenting the way things are. 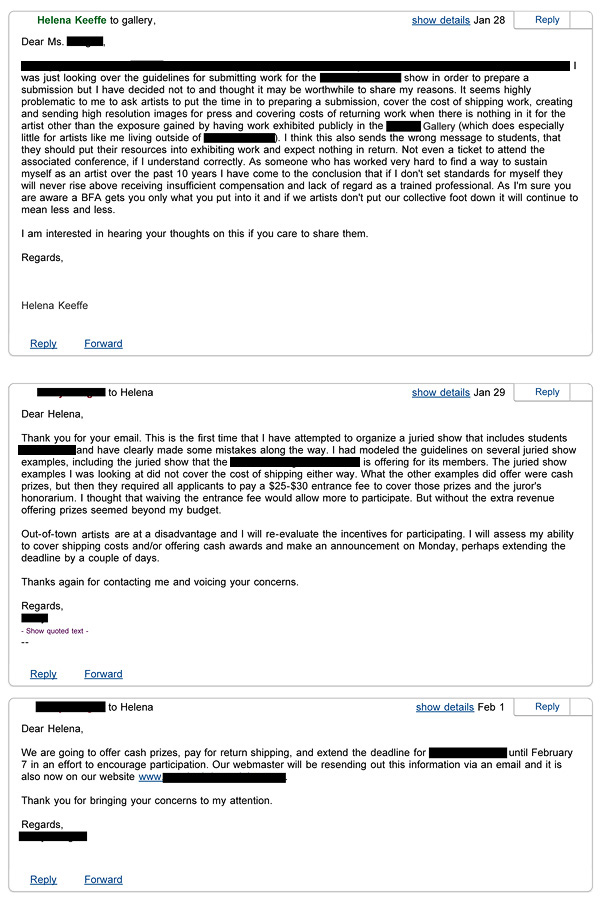 And of course I am not alone in my efforts to find ways to bring these issues to light. In her presentation Meeker mentioned Nato Thompson’s interview with W.A.G.E in the March 2011 issue of Artforum. W.A.G.E. has decided to take on a very specific cause in their activism — compensation from institutions for artists and cultural workers. They are attempting to increase transparency by surveying artists about their experiences exhibiting with institutions, as well as developing standards for a W.A.G.E. Certified Exhibition.

A 2009 work by artist Steve Lambert comes to mind, as well. Lambert was invited to participate in a group exhibition at the ICA in San Jose, but the lack of funds available for him forced him to rethink his contribution. In the end he sent instructions to curator Ray Beldner to have a Plexiglas box constructed (similar in design to a standard museum donation collection vitrine, but oversized) with vinyl lettering reading, “This money will be divided between the artists in the exhibition because the SJICA does not budget for artists’ fees.”

I recently stumbled upon an example online of what I’ve come to call a reverse rejection letter. It is dated 1986 and condemns the Artists Guild for charging fees for a juried show. Though established institutions have largely done away with such fees it is a model that is still out there, and it persists because it preys on a kind of desperation and a fear of saying no.

As I mentioned in my last post, I don’t think demonizing institutions is the answer. If I’m an advocate for any one strategy it is giving oneself permission to say no. Someone once suggested I teach a workshop on this subject, and though I have not yet developed curriculum for my How to Say No seminar, I can offer one more recent example of my own reverse rejection letter writing. When I’ve shared these with friends and colleagues I have received mixed responses. Some express fear that I will burn bridges, while others think the language is not strong enough. I offer them up here in a spirit of transparency with the hope that they will spur much-needed discussion on this subject we all find ourselves grumbling about in private but rarely debate openly in public. 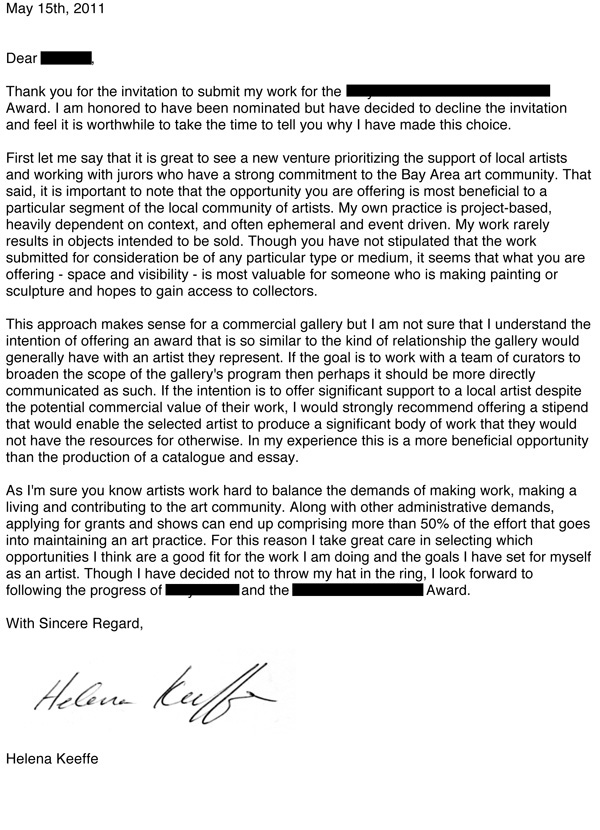