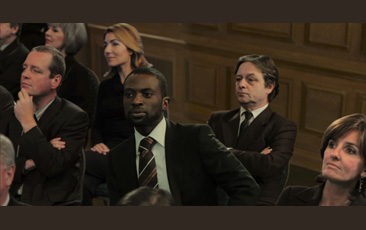 Last week I was called in for jury duty. Like most everyone who was instructed to report to the Civic Center courthouse that morning, I hoped to be ignored, or to find a way out of it with strong opinions. Alas, I was the second person to be called into the jury box for interrogation as potential juror. While I was screened by the defense attorney, he referred to a questionnaire I’d filled out the day before, homing in on how I termed my occupation.

“It says here you are a writer and educator. What does that mean?” he queried.

I replied that I write about visual art for various publications and teach artists in grad programs. I didn’t name publications or schools, or elaborate further on what I teach (which varies from semester to semester).

“Visual art,” the attorney repeated, his eyes narrowing, “is that like plays?”

“No, things in galleries and museums, mostly static work,” I corrected, feeling self-conscious particularly using the word “work.” I considered to myself that performance could be included in the mix, but refrained from mentioning it.

“How is that different than theater,” the legal professional countered as though he’d read my mind. It wasn’t really a question — he quickly moved on to address the person next to me, a substance abuse counselor (who was soon dismissed, for whatever reason).

Apparently, visual art is a more rational field than I thought, as I am now officially on the jury. The judge repeatedly notes that the subject of the case is something I’m forbidden to discuss, particularly in a blog, or on Twitter. But it’s the culture clash that is more personally interesting. The encounter left me feeling a little rattled, misunderstood. It was one of those scenarios that I often counsel students about in a professional practices class — how do we talk about what we do in general contexts? (Think of a way to describe your work to your grandma, is my usual advice.) I presume that someone with a law degree has some smarts, some brush with culture, and yet “visual art” didn’t register here. How could he have so little inkling of my field?

He’s not the only one. The brief courtroom moment was just another reminder of the cultural bubble within which we art people operate. I’d argue that we like it that way, at least to a degree. Making a case for the use of writing about art seemed like an interesting challenge — and I have to admit there’s some appeal in being in an environment where the conversation will certainly never touch on the Venice Biennale.

Of course, I’m viewing the experience through an aesthetic lens: I’m already fascinated by the digital renderings and PowerPoint graphs that have been projected in the courtroom to diagram the facts of the case (one legal team does it better than the other). I am as guilty of knowing little about the justice system’s current state of the art, but I can definitely evaluate the effectiveness of the technology and design, and how little it may have to do with a core of meaning.

Moving the other direction, evaluating contemporary art by applying law, process, and even some empathy seems like a more complicated endeavor. Or is it? I presume that the defense attorney made his comment because he’s a theater buff, and the stage is something he understands. There is so much theater to his own profession — the scripts are tightly written and immediately received by an audience. But courtroom drama is perhaps something I can view as narrative-based conceptual art, a ritual that circles around truth and tries to seduce us into believing something.

Maybe our worlds have more in common than I thought.