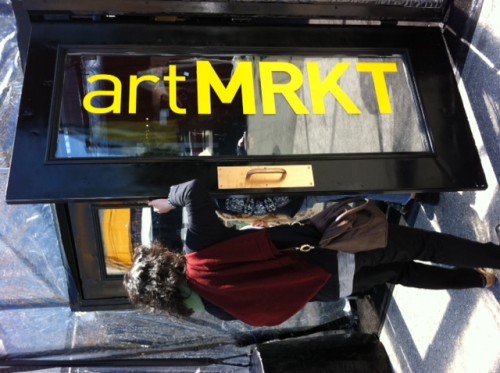 I was chatting with friends near a makeshift bar at the opening night of the much-anticipated ArtMRKT fair, nibbling on a muffuletta finger sandwich, washing it down with complimentary tequila, when someone inadvertently knocked a fanciful floral welded metal sculpture from its pedestal. The surprisingly heavy artwork hit my lower leg before meeting with the industrial carpet. The fall didn’t seem to damage the sculpture, or cause much of a kerfuffle — there was enough of a buzz in the air, not to mention plentiful free booze, to make this mildly interesting, professionally mounted art fair into a lively, distracting kickoff event. 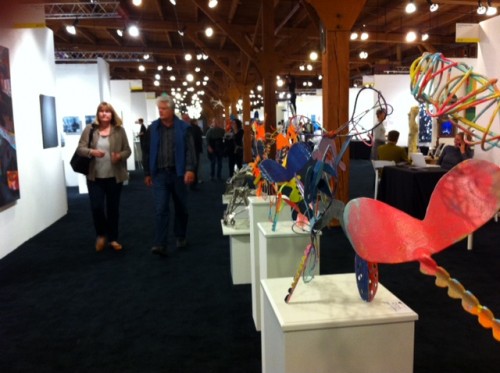 The sculpture that fell, replaced.

The woman who dislodged the sculpture looked horrified for a moment, put down her beer, and simply picked it back up and restored it to its temporary home. I took another swig of my drink, only moderately worse for the wear. At the close of the weekend, perhaps mild hangover is the fitting metaphor for this busy art fair weekend.

There had been grumbling, and some cheerleading, in advance of this convergence of three San Francisco fairs (I never made it to the SF Fine Art Fair at Fort Mason due to time and dismissive word of mouth). Questions were volleyed by dealers and art scenesters alike: Who would attend? Would NetJetters swoop into the city for an art fix? Would Silicon Valley entrepreneurs finally start supporting the arts by patronizing galleries? And what galleries would sign on? Who wouldn’t? (There were a number of prominent SF spaces glaringly absent from the primarily regional events.) 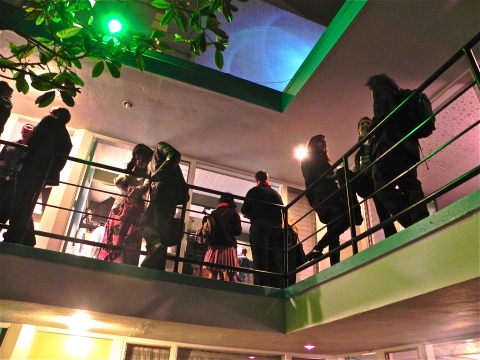 For their preview party, the organizers of ArtMRKT managed to fill the house with all sorts of people (artists, students, mid-level art patrons) via ubiquitous free yellow VIP cards — it was a genuinely animated shindig filled with brightly colored paintings, sculptures, photographs, and even a (very) few videos that were available for purchase. So was the poolside action at the Phoenix Hotel for ArtPadSF. The night wasn’t as chilly as it might have been, making it an entertaining stroll from one gallery-occupied guest room to the next. Some of these cozy spaces had beds clad in black satin sheets, others opted for floor space for their works. There were minstrels in chromatically mellowed rave attire, and projections on the side of adjacent tall buildings. That night, there was more celebration in the air than trepidation about weekend sales.

All the activity is undoubtedly energizing and community-building. These were places to catch up with friends and perhaps to meet new ones, with a built in conversation starter: Have you been over to the other fairs? It was particularly fun to plop down by the Phoenix pool at ArtPad on Saturday, as it wasn’t so hard to procure a complimentary Bloody Mary from a participating gallery, and there were bands and performances in and around the pool deck. Perhaps you could do a little shopping, too. Fittingly, there were more affordable options at the fledgling galleries at the motel than the more mature spaces at the mall-like MRKT (which wasn’t nearly as enjoyable to revisit in the light of day, not the least because all the light was artificial). Some sales were reportedly being made, and dealers seemed in decent spirits.

But was this activity, as more optimistic characters hoped, be a game changer? My wet blanket answer is a resounding no. San Francisco’s status as an art sales town is, despite perennial attempts to the contrary, stalwartly static. Contrary to the ArtMRKT moniker, this isn’t and will never be a primary market center, though it certainly doesn’t hurt to push against that position. Our market is determined by scale and temperament — we’ve got intimacy and experimentation on our side, but a curiously uncomfortable relationship to conspicuous consumption. And that’s OK. Part of the Bay Area spirit is the constantly revisited hope for expansion, for growth beyond the landlocked nature of the region, the liberal bubble as it is so often termed.

There is something more distinctive to San Francisco’s manageable footprint in relation to DIY commerce, as was demonstrated at the launch event for of Allison Smith’s The Cries of San Francisco, which coincidentally took place, in the midst of fair madness, on Friday night at Southern Exposure. The Cries project is itself an alternative art fair, an agora of artists, gathered by Smith, hawking unlikely wares and ephemeral experiences (olive crowns, pinhole camera pinatas, and new perspectives from the top of an elaborate ladder were among the items available for purchase or barter). They’ll be taking to the streets with carts and other brands of movable storefronts, with identifiable shopkeepers, in coming weeks. The SoEx gallery hall was buzzing with the kind of inventiveness missing from the traditional fairs, and expressed the Bay Area market in a more democratic way. I procured herbal antidepressant soap and half-price carbon offsetting, though wish I’d found some kind of salve for my leg, which still aches from the brush with that fallen sculpture.