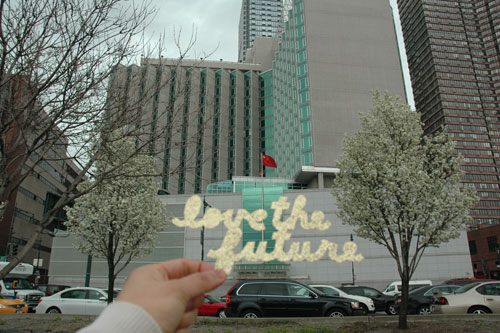 Love the Future — Chinese Consulate, New York City, April 2011. ‘Love the Future’ is a code for ‘Ai Weiwei,’ an innovation springing from censorship in China, where the results of internet searches for Ai’s name are are censored.

As previously stated on this blog, arts institutions and concerned citizens are calling for the release of artist Ai Weiwei, who was detained by Chinese authorities.

Ai’s whereabouts are still unknown. According to FreeAiWeiwei.org, today marks the 22nd day since Ai disappeared.

Shirin Sadeghi interviewed me about it for New America Media Radio. You can listen to the segment as an MP3 here.