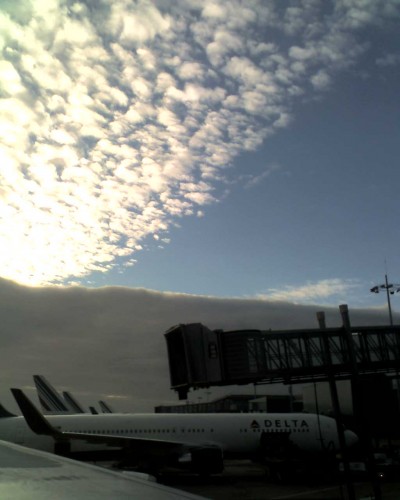 Thinking “these clouds work well together,” I’m on a plane leaving Charles De Gaulle Airport coming home to San Francisco. In an idle moment over the Atlantic, just past Ireland, almost at Iceland, with 7282 km to go, I open Magazine Air France, and on the front page a snow scene. Moscou ( Moscow). Turning the page, I’m looking at a spread, a few sentences with the title “Moscou en hiver” [Moscow in Winter] on the left hand page, and on the facing page “J’adore Dior.” I turn to the left and read,

[Wintery Moscow is a silent city. The intense activity on the street takes place in silence—it’s because of the snow…. The eye is bigger than the ear…. Picture books are scattered on the snow.] 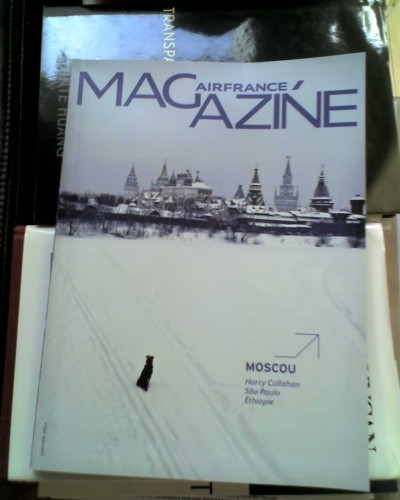 This is from Walter Benjamin’s Moscow Diary. Walter Benjamin the philosopher and critical theorist who wrote, “The tradition of the oppressed teaches us that the ‘state of emergency’ in which we live is not the exception but the rule” [“Theses on the Philosophy of History” Tr. Harry Zohn] and about whom Theodor Adorno wrote, “He immersed himself in reality as in a palimpsest.” [from the “Introduction” to WB’s Schriften, in Howard Eiland, “Superimposition in Walter Benjamin’s Arcades Project”].

And this monthly magazine is tucked into every seat pocket in the plane. On the next page is the Director of the publication plus the staff—it’s Gallimard, one of the leading French book publishers. “So,” I think, “this is how they do it in France.” In it, there’s a piece on photographer Harry Callahan (1912-1999). Callahan writes,

“On a beautiful, cold winter day, while I was shooting in the snow with an extremely soft light and now shadows, I suddenly saw the simple lines of grass standing out from the snow… without realizing it, this opened up a whole new way of seeing for me.” 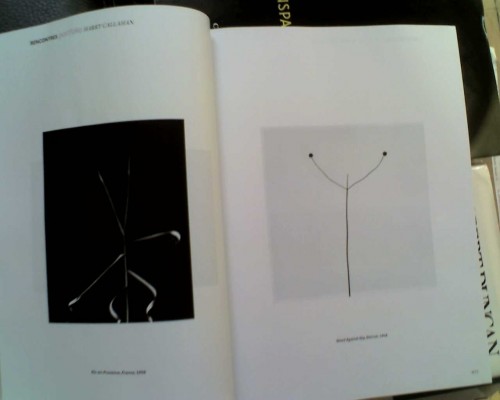