Let's Not Bash Detroit (or Fetishize It, Either) 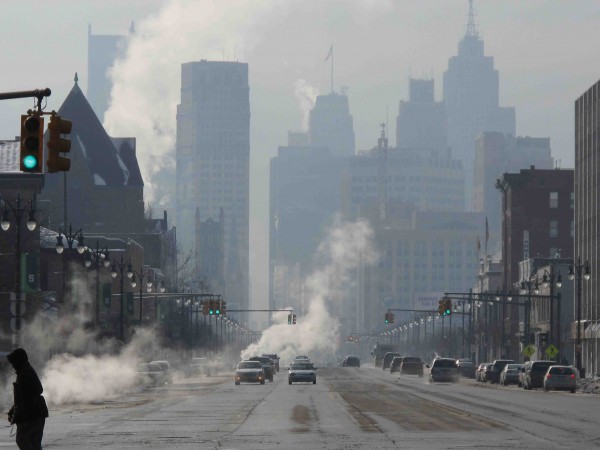 Looking down Woodward Avenue on a February morning, 2011

It was easier to tweet when I was in Detroit than it’s been to blog after returning home. It’s quite a stretch to fly from warm, wet and crowded San Francisco to cold, dry and quiet Detroit, and the minute you land in snowy Romulus and drive into town you are reminded of the Three Commandments of Urban Tourism: emotional projection is not social engagement; landscape speaks in uncertain terms; and generalizations can be fatal. These considerations, plus a very rich and exciting week, steered me towards telegraphic updates and away from longform thinking.

I went to Detroit seeking material to incorporate into my biennial LOST LANDSCAPES OF DETROIT screenings (the most recent of which I’m going to show in San Francisco on Tuesday, April 19), and to meet people who might have home movies that I could use in future programs, but I think I came home with more thoughts than films. Now there are many things to say about Detroit today, and I’ve been deeply reluctant to join the (mostly non-resident) chorus of bloggers and urbanists speculating on possible Rust Belt futures. But after the release of the 2010 census count that asserts the city of Detroit has lost 25% of its population in the last ten years, I feel the need to say at least a few small things. (I’d also like to recommend Detroiter John Patrick Leary’s excellent essay “Detroitism“, which addresses some kindred issues at greater length.)

While Detroit is one of the most striking urban landscapes any of us will ever encounter, most of us (and by that I mean most visitors) witness it without really seeing it. We rather reconstruct it as a giant phantasmic canvas (or, if you think as a mediamaker, a screen) onto which we project our own narratives of what we think the city is, or perhaps more to the point, what we might wish it to be. By now most of these will be familar: the city of post-industrial apocalypse, at once frightening and alluring; the city of romantic decay, reverting to Edenic greenery; the mecca for young artists, drawn by $100 houses; the blank slate that screams “your project here”; the paradise-in-waiting for would-be urban farmer refugees from pricey coastal cities. Each of these narratives find some anchorage in Detroit, but none of them are adequate to summarize its present or predict its future. Like most communities, Detroit is a multitude of concurrent presents and possible futures, and while many Detroiters I know hope that it will survive and flourish, they often sound noncommittal, for they’ve seen many booms, busts and trends come and go. They’ve also seen a lot of tourists, and they’re used to hearing people ask for directions to the more spectacular ruins.

It’s impossible to ignore the intensity of Detroit’s deterioration and decay, but it’s easy to overgeneralize those aspects of its landscape. Older Detroiters and many who have left the city for the suburbs or for warmer climates recall the crowded shopping streets of the 1950s and early 1960s, and often tell stories about the wonders of Hudson’s department store, the actual and symbolic retail anchor of downtown. Their discourse can be permeated with nostalgia and loss. But for anyone under 30, Detroit’s current condition and density is completely naturalized. It’s the backdrop against which they live, work, party, learn and survive. And what happens in Detroit from now on is largely going to be up to them.

I used to spend much of my Detroit time driving around and looking at manifestations of absence, loss and decay (and visiting the many excellent Middle Eastern restaurants in the adjoining city of Dearborn), but on my last several trips I’ve found myself spending most of my time in conversation. As a result, my sense of the city has shifted from empty to full. While Detroit appears to be the emptiest of major cities, it’s not a blank slate. Emptiness is in the eye of the beholder. Detroit is full of people and full of the networks people build among themselves. Absence, deterioration and decay are present throughout many neighborhoods, but we wouldn’t need to travel far from our San Francisco homes to see the same thing. Postindustrial detritus is as close as the Hunters Point Naval Shipyard, emptiness as close as Treasure Island on Sunday morning, and hopelessness is as close as the people walking slowly down our streets. And even I, a non-native San Franciscan, remember when the sidewalks of our neighborhoods were clogged with shoppers, theatergoers and people waiting for Muni. Cars and interior lifestyles have sucked people from the streets, yet we don’t interpret that as emptiness.

I just saw DETROIT WILD CITY, a film directed, shot and edited by Florent Tillon, a French filmmaker oriented towards landscape. It will shortly be playing at the San Francisco International Film Festival. While Tillon’s film contains its share of what some Detroiters call “urban porn,” it also lets Detroiters speak their minds on possible urban futures. And even as it shows a cross-section of urban farmers growing vegetables and milking goats, it questions the universality of the new agriculturalist movement. An outsider historian named “Black Monk” also suggests that there are limits to urban pioneering, that “urban pioneers find the edge, but don’t occupy it,” and that “cities are built by settlers, not pioneers.” What I saw in this film resembles what I think I’ve begun to learn in Detroit: that while macronarratives may help us understand the past, micronarratives will describe the future, and that Detroit’s destiny will be the product of many individual, smallgroup and localized efforts, rather than one single systemic initiative.

By all means visit Detroit and visit with Detroiters. But let’s not let our outsider constructions of Detroit distract us from our own communities. If we examine our own immediate environment with the intensity that we now focus on the Rust Belt, and if we test our toolbox of utopian (or dystopian) narratives against our own landscape, we might find that airmiles aren’t necessarily prerequisites for awareness.