Apsara DiQuinzio: Subject to Change, the Case of Ophiuchus

In the news recently, many of us learned a surprising thing: there is a 13th zodiac sign, known as Ophiuchus, or the snake bearer. We learned this from the Minneapolis astronomer Parke Kunkle, who merely pointed out to a reporter what scientists have known since Ptolemy — that the sun actually passes through 13 constellations, not 12. For mainstream followers of astrology, however, the news was cause for consternation. Ophiuchus’s presence in the zodiac has forced many to come to terms with the idea that we may not be who we were told we were. My sign used to be Aquarius, but now, according to the more accurate chart, it is really Capricorn. If scientists have known forever about Ophiuchus, why hasn’t modern astrology adopted this sign? The answer is simple: we cling to tradition. It was much easier to ignore Ophiuchus’s presence than to change the astrological calendar. Truth is inconvenient and change is difficult.

The story of Ophiuchus is illuminating because it demonstrates that self-understanding is mutable and subject to revision once new information is brought to light. This reminds me of another important anecdote: the story of Galileo and Copernicus, whose radical championing of truth (with a lowercase t) led us to the understanding that humans are not actually located at the center of the universe; in fact we are much smaller and less significant than we considered ourselves to be. The implications of this discovery were profound and, for Church authorities, unwelcome, resulting in Galileo’s arrest. Thankfully, the world eventually caught up with Galileo, and adaptation became easier. Tradition yields to knowledge. This is the celebrated story of Modernism — a succession of moments over time when there has been a break with received ideas, styles, and beliefs. 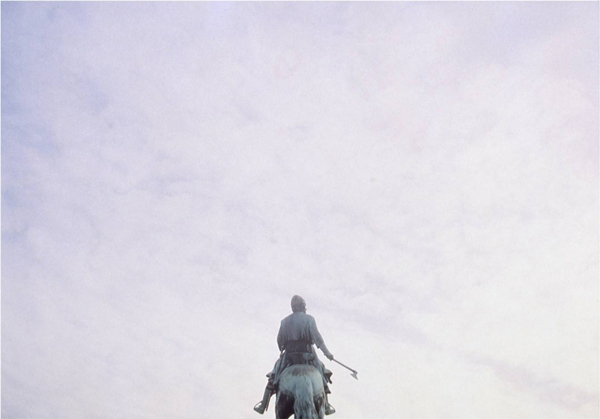 Matthew Buckingham, Image of Absalon to Be Projected Until It Vanishes, 2001

Like the cases of Ophiuchus and Galileo, several works in The More Things Change demonstrate that our understanding of the self and of others is a story that is still unfolding. The artists point out that what we are looking at may not be what we think it is, and we need to create space for the fissures in identity and thought that are bound to occur. Inevitably, things are more complex than they appear initially; there are unknown presences yet to be identified. This is what Matthew Buckingham conveys in The Image of Absalon to Be Projected Until It Vanishes (2001). Absalon was the founding hero of Copenhagen, and his memory is monumentalized in the equestrian statue seen in the work’s sole image. A 35mm slide picturing the statue of Absalon is continuously projected onto the gallery wall. Over time the photographic emulsion of the slide literally burns into the image, causing the picture to dissolve and fade into an abstraction. Buckingham presents the figure as entropic. The mutability of the projected photograph acts as a metaphor for the mutability of history. Over time our understanding of who Absalon was evolves, as does his position in history. 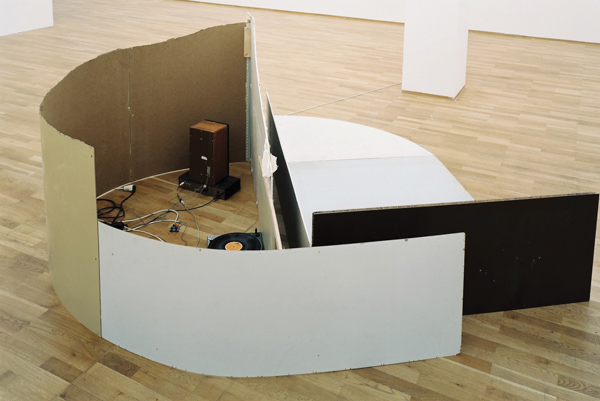 Felix Schramm’s open-ended sculpture Soft Corrosion (2006), which will go on view in mid-April, similarly warns us not to stake too much on formal permanence. Each time this work is installed, pieces of drywall crumble away and the record spinning on the turntable inside gets more worn down. The sound produced by the piece is, moreover, unrecognizable: Schramm punctured the record and placed it off center so that it rotates in an irregular ellipse and plays at only 16 rpm. Over time, the sound quality deteriorates, increasing the sense of distortion. As the viewer circumambulates the abstract construction, her experience, or vantage point, changes. This work demonstrates that there is no one correct view of the landscape we walk through, and that the ground beneath our feet will continually shift. 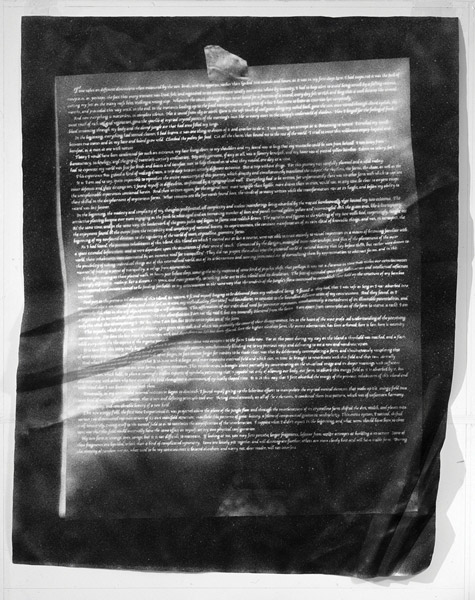 Paul Sietsema’s The Famous Last Words (2006) encapsulates the desire to know (or be able to visually read) a subject that has in essence become illegible to us over time. To create the text pictured in the drawing, Sietsema blended appropriated excerpts from various texts, including the Belgian poet Henri Michaux’s opium diaries, Thor Heyerdahl’s journal Back to Nature, and the writing of the expressionist art historian Wilhelm Worringer. These sources and more are seamlessly woven together with bits of the artist’s own writing into a fictional diaristic account of life on a remote island somewhere in the South Pacific. Rendering passages of the drawing’s text illegible and folding the paper so that it assumes a sculptural quality, the artist creates what he has described as a “representational terrain the reader/viewer has to contend with.” The identity of indigenous cultures in the South Pacific was mediated by European adventurers such as Thor Heyerdahl, whose diaries became representations of Pacific Islander communities for Western consumption. Sietsema’s work provokes us to consider the distortion and entropy that results from that process of mediation.

The lesson we can glean from the case of Ophiuchus is to remain open to the inevitability that things will change, that our understanding of who we are forms over time and is subject to revision. We must negotiate this shifting terrain by asking critical questions of our environment. If facts are subject to change, well, we must be, too. When we fail to examine and adapt codified notions of who we are, we might find ourselves wrongly persecuting the people who bring new, challenging information to us. There is a second lesson here, too: to pay attention to scientists and artists more often.

Apsara DiQuinzio is assistant curator of painting and sculpture at SFMOMA. The More Things Change is on view on through October 16. Excerpts from these statements by curators will appear in the galleries at various points during the exhibition.