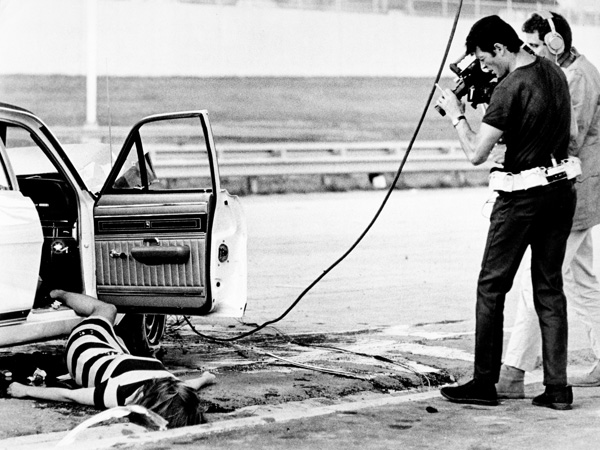 Through the weekend SFMOMA’s doing a series of screenings, at the Castro Theater—thematically keyed to our Exposed: Voyeurism, Surveillance, and the Camera Since 1870 exhibition—and TONIGHT living legend of cinematography Haskell Wexler will be in the house to introduce a brand new 35mm print of his film MEDIUM COOL, which he directed in 1969. Dominic Willsdon will engage Mr. Wexler in a Q&A after the screening.

For fun: “Haskell Wexler: See, Nothing is Real”—Roger Ebert’s 1969 interview with Wexler, the eve of the film’s release.

Medium Cool. Notable for its cinema verité style, this 1969 film by Haskell Wexler mixes fictional and nonfictional content to poignantly illustrate the great social tension in America in the late 1960s. Following a television cameraman whose specialty is obtaining footage of violent, difficult events, the film sheds an interrogational light on Marshall McLuhan’s description of television as a “cool” medium by investigating the hot moral dilemmas as faced by the protagonist. Print courtesy of Paramount Pictures.