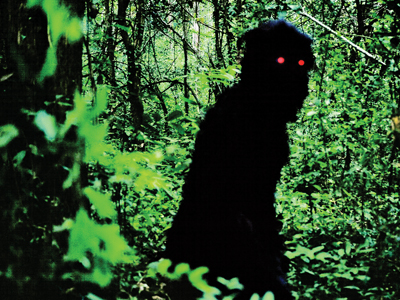 Apichatpong Weerasethakul, Uncle Boonmee Who Can Recall His Past Lives, 2010, still

The second I got my turn at the box office for a Sunday night Sundance Kabuki screening of Uncle Boonmee Who Can Recall His Past Lives, Thai director Apicatpong Weerasethakul’s latest, Palme d’Or winning film sold out. It’s heartening to see that the work of an uncompromisingly peculiar filmmaker and artist filling the art house in the same multiplex as The King’s Speech, but I was peeved. It was a temporal issue (as is the film), I’d carved out the time for it that evening, and damn if I wasn’t going to see it that night. I lingered around, a bit out of sorts, and someone returned a tickets—thank heavens for flakes and Fandango. I shouldn’t have worried– I managed a seat without much stress.

Excitement isn’t exactly the best way to approach this filmmaker’s oeuvre, which is innovative in his employ of an extremely relaxed pace, and an assured sense of cinematic language. The film is mystifying, but there’s no real reason to struggle to decode— you either go with its flow through an energizing, enchanted Northern Thailand forest where hairy ghosts with glowing, cigarette ember eyes and amorous catfish graze, and find yourself wonderfully perplexed, or you get a nap. (I got a little of both.)

This post is a plug—the film’s showing through Thursday—for an artist who, I find, manages to catch us off guard, on his own optimistic terms. They’re films that move at their own peculiar pace, punctuated by moments of non-sequitur wit, medical procedures, shared family meals, and murky darkness in which strange creatures rustle, but never exactly bite. (“Heaven is overrated,” deadpans Boonmee’s ghost wife.) Instead, they make their presence slowly known in your subconscious, when you least expect them.

Weerasethakul, is not exactly obscure—he’s a global film darling, who has international film investors, like Danny Glover, who associate produced this one, and introduced what was certainly another sold out show last week.  For the uninitiated, Weerasethakul is also known as Joe, and has made six features, a bunch of short films and video installations (the one I saw in 2007 at REDCAT in LA, Unknown Forces, is an enthralling, head scratching multi-channel road trip, with a thumping dance club sound track, and a work someone should present in the Bay Area, please) each of which infuse a mysteriousness into the mundane (ghostly spirits and public outdoor aerobic classes in Bangkok).

What struck me about this film, after seeing all his others, is the way artists can shuffle their deck of recurrent motifs and still come up with something different. Uncle Boonmee has almost all the ingredients of Joe’s other films. As with previous works, there are tensions between the rural and urban, natives and immigrants, the rational and the mystical, human and animal, dark and light, living and dead, sweet and piquant, past and present.  It’s a film about dying, but more about the joy of life.