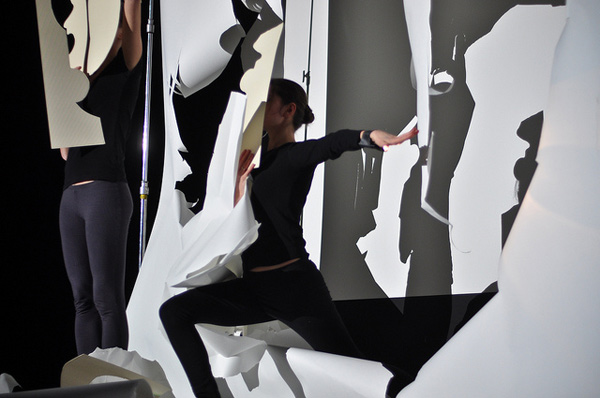 Media and genres collide and merge in the work of Russian artist Anna Parkina, and her works on paper — on view now — reflect on the changes in Moscow since the collapse of the Soviet Union. Today, assistant curator John Zarobell on working with Anna on her current New Work exhibition.

On February 25 SFMOMA opened New Work: Anna Parkina, an exhibition that includes photo-based collages, a nine-part collage of backlit vellum, two cases of “archival material,” and a live performance in the Now Playing series. The array of work Parkina has made available at SFMOMA is a testament to her incredible creative energy and her ambition to make a major showing for her first museum exhibition. Yet it is also a demonstration of the way Parkina works, merging genres to generate new forms that propel her art forward. Working with her to prepare this exhibition was one of the more exciting (and sometimes hair-raising) experiences of my life as a curator, and I thought the best way to write about her work, and the role of the curator in relation to the artist, would be simply to write about the year between when I met Anna and when her show opened. Since she lives in Moscow, where I have never been, and since she had never been to San Francisco before coming to install her exhibition here, this story can tell us about the art world today, where strangers meet in cyberspace and generate projects that eventually land in the real world.

I first came across Anna Parkina’s work at the last Venice Biennale, in September 2009. I was intrigued by her work and mentioned this to my boss, Gary Garrels, upon my return from Venice. He also had noted her collages and so an idea for a show was born. I pursued her online profile and found that she had shown a lot, in Germany, Moscow, and the U.S.; her main gallery, Wilkinson, in London, provided me with ample documentation of her multifaceted career. I caught up with her last March, during the week of the Armory Show in New York. She was opening a project show at Barbara Gladstone’s space on 21st Street and I met her at the opening. The next day, we met to discuss the Gladstone show and what might come of a project at SFMOMA. 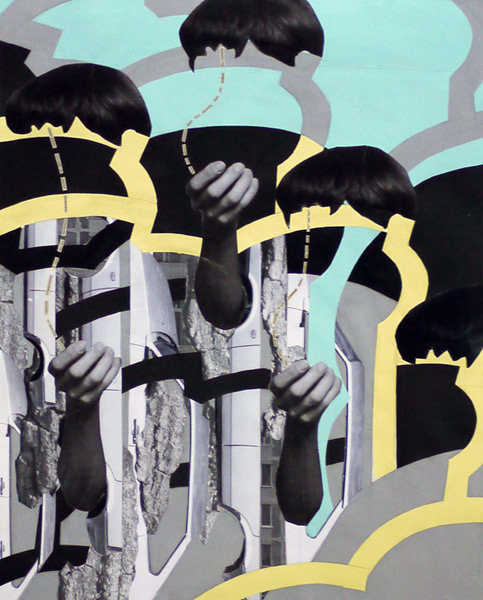 Anna was not what I expected. Her English was good (she has spent a year in Pasadena, as well as five in Paris) but her expressions were very direct. She did not seem naïve, exactly, but I was not prepared for her to be so sincere. There was no irony whatsoever in her manner, but she does have a sense of humor. We talked about Russian Constructivism, Dada, her past projects, and what she might do at SFMOMA. She had several projects already scheduled for the time before the SFMOMA opening: a book to produce in Paris in the spring (Biryulevo, One Star Press), a show for Focal Point Gallery at Southend-on-Sea, and an opening at Wilkinson in London in October. In short, she was already booked. I asked her to set aside work for the show at SFMOMA and to come visit San Francisco before the show. But the visit did not happen, and she never had time to make work that was not already going to be shown elsewhere, until after she returned from London—with a scant three months to prepare the shipment to SFMOMA. Having been captivated by her work, I had been told by all who knew her that she would not let me down, but I was a little nervous.

It was not for lack of trying that I did not make it to Moscow. When Anna could not come to San Francisco in advance, I wanted to meet with her in Moscow, but she told me it would be far better to see a complete show in London in October than to visit her studio in November when the work for SFMOMA would not be done. At that point, I got it. She was not a maker of discrete artworks, with a studio full of works-in-progress; she was someone who struggled over a fixed period to assemble a body of work and to manifest that body in a gallery. She had never worked in a museum before, but that didn’t matter—she was only capable of doing her work as a series of interwoven objects and acts that would not actually come into existence until the works entered the gallery. The show is the work, and it would not be done until opening day, no matter when it had been begun.

Anna’s works arrived at the museum well in advance of her, and I can still remember the sensation of going through the paper collages one by one, fascinated by the recurring imagery, the way it all seemed to fit together despite the difficulty of finding the fragments spread throughout the pictures. By the time Anna arrived, the work was framed. The vellum collages had been installed in front of the light box built into the wall (thanks to exhibition designer Kent Roberts!) and we were prepared to assemble the show. 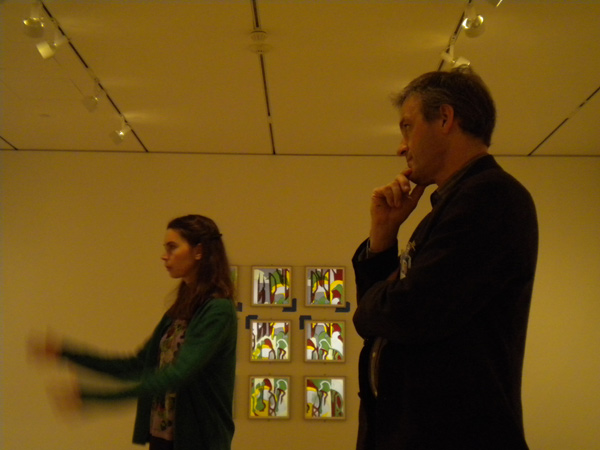 Anna’s collages required her to install them, but as a curator I was no fly on the wall. It was necessary to collaborate with her to produce the work that is the exhibition. And I was not the only one involved. Her husband, Dimitry, came in and added his views, providing another perspective and forcing us to rethink our ideas. We laid the show out on blankets on the floor along both walls, constantly moving pictures here and there (thanks to John Holland, the installer on this project), until we reached the arrangement we thought worked. Then hanging the pictures required more consideration. Not only did the works look different on the wall, but you have to adjust for the distance of each picture from the floor, and none of us wanted them to hang at a consistent height. The work was just too dynamic to arrange that way, and the nine-part collage was hung in a grid on the end wall, providing a stabilizing force for the room.

Anna titled the whole show Fallow Land, the idea being that her version of modernist collage was a return of sorts to a place that her people had left long before and that had since lain fallow. And I returned with her: I too had been spellbound by the massively complex utopian artistic projects of the twentieth century, without having known them firsthand. To visit that place with a young Russian artist was a unique opportunity. To play at assembling her work in our gallery was a way of connecting my work as a curator to the history I have studied, and to explore the relationship between the contemporary present and the modernist past. To see this dynamic between past and present anew is the pleasure of working in a contemporary museum.

John Zarobell is assistant curator of collections, exhibitions, and commissions at SFMOMA. New Work: Anna Parkina is on view through June 19.