Faster Than a Speeding Bullet! More Expensive than a Diamond-Encrusted Skull!

Yes, that’s right – the F-22 Raptor can literally fly faster than a speeding bullet! Think about that. While an average bullet flies between 500 and 1,000 mph, the Raptor is capable of flying at speeds between 1,200 and 1,500 mph. Since the F-22 is one of the fastest aircraft flying today, it is also one of the most expensive. According to the the Government Accountability Office the F-22 costs $361 million per per jet. All those millions in tax dollars translate into an airplane that is super stealthy, supersonic and almost invisible to radar and infrared sensors. And, amazingly, it can shoot down cruise missiles in mid-flight! Combine that with top-secret advanced electronics and software, it is to the military what Damian Hirst’s diamond-covered skull is to the art world – an expression of political power and wealth. Yet as decadent as it appears to be, the platinum and diamond-encrusted skull only cost about $20 million to make – even with 8,601 diamonds on it. And wasn’t paid for with tax dollars. 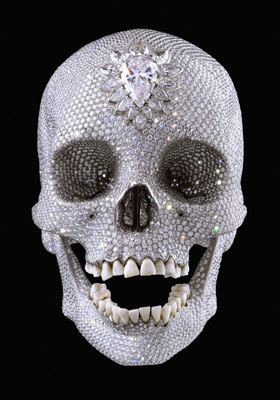 In fact, most art isn’t paid for with tax dollars. American, British or otherwise. Another fact is that artists pay taxes too and expect something in return, not just fighter jets. Art institutions and museums employ thousands upon thousands of people who all pay both federal and state taxes across America. In turn art institutions make purchases and spend money in local communities, contributing to the economy in the same way as any other business. Yet ironically, they serve to educate and entertain the general public – the very same public that accuses artists and art-lovers of being liberal elitists, whatever that means. Few in the general public realize that the board of directors of many museums are made up of powerful bankers, business people and politicians, not old hippies with dirty pony tails. The reason is simple: art is a GREAT investment and there is BIG money in art.

Why else would the former Chairman and CEO of Bank of America, and infamous corporate raider, Hugh McColl Jr.,  tell the San Francisco Chronicle in 2008, “My art collection is holding up better than my stocks.”? Because it’s true! If one disregards things like meaning and love and cultural value and just focuses in on financial value, then over time, art just might be one of the best investments one could make. 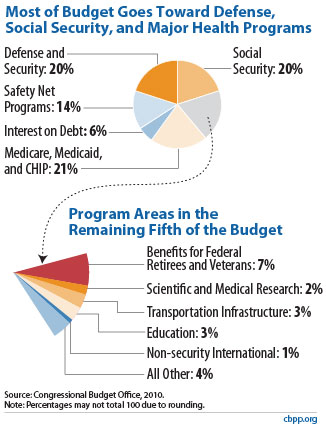 But I digress. Although the Raptor is more expensive than any other fighter jet, the B-2 Spirit Stealth bomber costs a whole lot more. Almost seven times more, actually. Each Stealth bomber costs $2.87 billion. They are designed to be invisible to radar and to carry a payload of up to 64 nuclear bombs. Each one of those bombs would be able to incinerate over 100,000 people instantaneously. So isn’t it fair to ask – with so much money being poured into such devastating weapons, – what’s the harm of funding some art programs for kids in schools? Or funding theater productions in rural towns? Or helping museums put on exhibitions that teach our citizens about American history? Where’s the harm in that? Those are the kinds things that the National Endowment for the Arts does. Tax money can be spent on nuclear bombs and it’s o.k., so why can’t tax money be spent teaching kids to be creative problem solvers and to be culturally literate?

Don’t get me wrong – it makes sense to want the best military in the world, to protect our own children from the bad men out there, both real and imagined – especially so if that means we can have a country where people enjoy “Life, liberty and the pursuit of happiness.” But if we collectively decide to outspend all other countries on defense and then allow our largest corporations to pay little or no taxes, then the little revenue left over should go to creating a fantastic society, right? But it doesn’t. When looked at honestly, our tax dollars are paying for gargantuan military spending – over $600 billion a year – a lot of which is wasted and never audited. And while Congress claims eliminating NPR and PBS and the NEA and Collective bargaining by Unions will save money, it’s worth taking a look at how our taxes are also paying for what should be a criminal $800 billion tax cut for the financial industry and those involved in the military industrial complex. By now that’s all ancient history. All of that money – and I mean ALL of it – is down the drain. 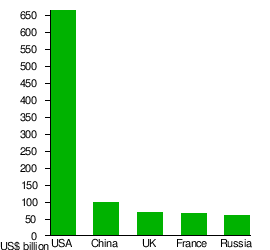 From the “The world’s top 5 largest military budgets in 2009. Figures sourced from SIPRI.”

At least when we pay social security taxes the idea is that we get it back when we reach retirement age. Why would anyone in their right mind want to cut that – especially in an era when life savings evaporate over night as these huge companies, like Enron, fail catastrophically, leaving their investors with nothing? That said, the arts are a good investment – they teach critical thinking skills, creativity, tolerance and cultural history, which ultimately helps to unify rather than to divide people. If the United States wants to remain an innovative nation then it needs to provide people with the intellectual tools to get there. That’s a big part of what the National Endowment for the Arts and National Endowment for the Humanities are best at.

Interestingly, the annual budget for the NEA is just $146.2  million – about half the cost of just one F-22. The budget for the NEH is likewise $146.2 million. It is a pittance! Less than a penny a year out of each tax dollar! Yet many conservative members of congress have been suggesting both the NEA and the NEH should be eliminated. What I wonder is this: if we can have the most expensive military in the world with the fastest and most powerful jets anywhere then why can’t we have the best-funded art and cultural institutions in the world?