Do Physical Objects Have the Right to Exist? 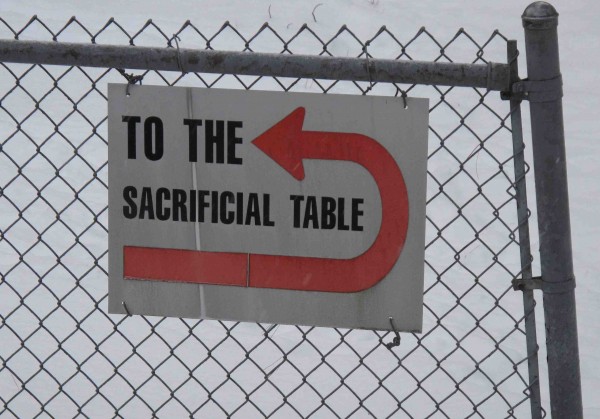 This may seem like a facetious question, but I’m really quite serious. Naturally, I’m not talking about the plastic soda bottle you’re kicking down the sidewalk or the paper cup you should be composting, but about physical items that are part of the cultural and historical record. The way we think about preserving cultural records is changing rapidly and much too quietly for my taste, and the sum of many seemingly trivial decisions could shape up to be quite a surprise.

Whatever we may think about hierarchies, they help us manage details and make decisions. Those of us who live in highly developed societies create, massage, and slough off tremendous quantities of information, so much that op-ed writers are accusing us of overindulgence and waste. Hierarchies help us decide what to keep in front of us, what to move into the background, and what to throw away. Most of us don’t keep grocery receipts or old Bay Guardians, but we tend to keep our baseball trophies (if not our grandfather’s) and our senior theses. Archives and museums also decide to deaccession items, though they’re often ticklish about publicizing what they let go of for fear of offending donors and others who might attach value to particular items.

Hierarchies can cause friction and conflict and sometimes enable acts of disposal that look bad in retrospect. NBC probably shouldn’t have dumped many of its early TV shows into the ocean, and the New York Public Library probably shouldn’t have disbound its precious pamphlet collection, microfilmed it, and sold it as waste paper, but these actions seemed reasonable to decisionmakers at the time. Similarly, decisions to keep certain collections may now look less than perfect in hindsight.

But today we face a problem of scale. The analog cultural record is insanely huge, ungainly, and temperamental. By now I think Open Space readers know the mantras: photos fade, paper gets wet or burns, films decompose, tapes drop out, etc. Many archives are filling up with collections that they’ll never have time to arrange or describe, and are redesigning workflows to allow for minimal processing. Like parents who covertly junk their kids’ artworks, archives are also turning away and deaccessioning collections. There is far too much analog material that’s been collected, that’s waiting to be collected, and that people don’t yet realize ought to be collected, and there aren’t enough institutions or enough money to collect it all. Independent, nontraditional, and specialized organizations plus individual collectors have stepped in where established archives can’t, but they often lack the infrastructure and funding that’s necessary for long-term survival.

The proliferation of digital information is complicating the already tenuous status of analog. Collectively, we’re working hard to figure out how to collect, curate, and preserve digital information, and it’s still difficult and expensive. But in many ways digital objects are less temperamental than analog objects, and I believe that digital is starting to distract archivists from analog. As it gets easier and cheaper to work with digital materials, we’ll be able to do more to preserve digital cultural heritage, and working with analog objects will become a rarer practice.

It’s happening with books, as more books get digitized. Smaller libraries are weeding books that Google, Internet Archive, and e-book vendors have scanned, and I can see their point. Why keep a book on shelf when it might not be consulted for years? (Even at the little Prelinger Library, it costs us about 30 cents per year to keep a book on shelf.) The books just get thrown away. It already happened with newspapers, as Nicholson Baker has (somewhat tendentiously) pointed out — they were microfilmed, often poorly, and the originals were junked. It’s likely to happen with videotape, because tape deteriorates and we now can make high-quality files, even if we don’t quite know how to save them.

And I think it’s going to start happening in my field (archival film), where professional ethics and historical precedent currently dictate that you don’t throw away original material except in very special circumstances, even though you may have copied it to a more stable format. So while archives used to junk flammable nitrate film after copying it to safety, they now keep the nitrate cool and dry, because emerging technologies may enable us to make better preservation copies in the future. This is both ethical and reasonable. And yet, considering the vast amount of analog film and videotape that’s clogging moving image archives, ethics may be at risk. Only a small fraction of film on the shelves ever gets seen by researchers, scholars, or the public. And only a small fraction of that ever gets reused. The rest sits waiting for a longshot request that might bring it out of obscurity. At the same time the costs of bricks-and-mortar storage, human stewardship, cooling and dehumidification all rise, as the amount of film in storage escalates.

Information is archival capital, but too much information is a liability. I foresee institutions starting to tune their collections more finely as they recalculate the relationship between comprehensiveness and fiscal balance. “Repositories of last resort” may step in to save one or two copies of each physical object after it’s digitized, but I wouldn’t count on it.

Does the obsolescence of physical objects constitute a serious loss? While I would almost never excuse the intentional destruction of cultural materials (don’t ask me to explain “almost,” as this post would then go over limit), I don’t necessarily lament the existence of gaps in the cultural record. Desire to restore what’s missing, to address gaps in the record, can be a powerful motivator of history (and, for that matter, art). Loss can be formative. Much artistic and historical practice today has an archaeological inflection; it’s devoted to chasing forgotten discourses, near-mythical communities, and liminal situations. But archaeology is certainly easier when the evidence hasn’t been thrown away.

What civil rights do we want to grant to physical objects with artistic, cultural, and historical significance? Objects are mute, and each may one day have its own quiet moment of reckoning.