Robbing Your Mamma To Pay Your Poppa 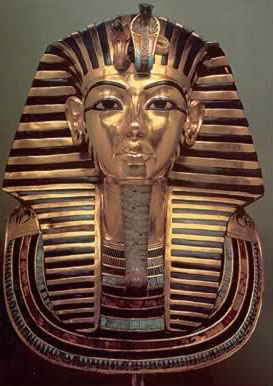 As a revolution tries to unfold in Egypt, many Americans who have watched the Antiques Roadshow know why soldiers and citizens alike were seen guarding the Egyptian Museum. It’s because they know that old stuff can be valuable! It’s not just a bunch of crusty statues, drawings, coffins, jars, paintings and old jewelry in there, hell no, some of it is made of real GOLD! And right now gold is worth $1,337.40 an ounce!

Just one mask alone weighs 24.5 pounds. Do you know how much gold that is? Let’s do the math: there’s 16 ounces in a pound for a total of 392 ounces. OMG that means King Tut’s mask is worth $524, 260.00! Maybe more at auction. They also have a big collection of ancient silver and gold coins which are probably worth a lot too. No wonder people are guarding the place. And no wonder people have been robbing Egyptian graves for thousands of years. From what I hear you can’t even plant a garden in your back yard in Egypt without finding some ancient bead or rare artifact. It’s so strange to us here because who the hell would bury all that gold unless you stole it?

But as the internet traffic and cell phones there were cut off and hundreds of thousands of protesters brought Cairo to a stand still this week, it appears that some bad people were breaking into the museum to steal whatever they could get their little paws on. Unfortunately for them it seems that groups of

‘youths’ as the media is calling them, showed up and caught them red-handed. Then the ‘youths’ proceeded to kick their ass. Finally some soldiers showed up and took the bad guys into custody. Ironically in this country of eighty million people the military have pledged not to attack the protesters, which is big news in this part of the world.

But today it has come out that some funny business was going on at the Museum. To a country weary of corrupt cops demanding bribes, blackmailing small business owners, arresting political dissidents and serving as the most public face of the unelected government, it came as no surprise when, according to Human Rights Watch director Peter Bouckaert, several of the captured and wounded looters had police identification cards on them when they were caught.

Also, according to rawstory.com:

“Police identification cards were also found on looters all around Cairo and Egypt. In fact Bouckaert implied that police forces may have been responsible for the escape/release of thousands of prisoners, describing it as “unexplainable.”

“The locals say the only people with weapons are police who’ve taken off their uniforms and are responsible for most of the looting and crime,” Human Rights Watch deputy director for Middle East and North Africa Division Joe Stork wrote from Suez Sunday.

“As up to a million Egyptians marched Tuesday, ordinary citizens set up checkpoints to keep undercover police from bringing in weapons and perpetrating violence.”

So basically the protesters have been trying to conduct a massive and non-violent demonstration and are working hard to maintain it. Here in the US we tend to think highly of our volunteer police and military because the vast majority of them help to keep our cities safe and they catch the bad guys. In Egypt though, the police are the bad guys and public sentiment is just the opposite. The poorly paid cops (they make about $41 a month) are notorious for blackmail, graft, bribery ad all manner of thuggishness. Of course this isn’t a very sexy news item for American media, who have their own bias against protesters in general. Nor is the Vice Minister of Culture,  Zawi Hawass, interested in the blame game since his job being responsible for the safekeeping of all Egyptian artifacts is hard enough. The sad truth is that it is commonplace everywhere for cops to wear plain clothes, infiltrate protest marches, throw a few bricks at windows, light some fires and then blame (then jail) the protesters. They did it during the Free Speech Movement in Berkeley. They did it to smear reputations in the Civil Rights Movement and used it with the Black Panthers too. Hell they do it all the time here in the US. It’s a reliable counterintelligence tactic because the public never believes the authorities would do such a thing. But I digress. In this instance the idea is for the Egyptian and world media to be fooled into believing the protesters are looting their own culture by stealing the antiquities. In turn that would help to justify crushing the uprising. Hosni Mubarak would have the moral high ground, as they say. After all what kind of evil, degenerate, hippie protesters would stoop to destroying the relics of their own country?

So it is instructive to watch how the safety of ancient Egyptian art becomes a political football in the struggle for power. The art, after all, represents the culture of the country and is a strong symbol of Egyptian uniqueness. The fact that all those artifacts are being protected is good news but as always, the way that art is dealt with in any given country is a weather vane of the politics of the time.