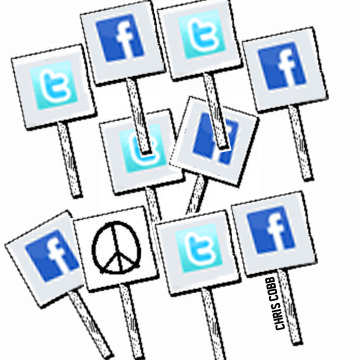 No one ever thinks they will get killed for using Twitter. Or beaten for taking a photograph. Or arrested for making a video. Or for making a sign critical of the government. But apparently such things have been happening in Egypt. According to Human Rights Watch, about 300 people have been killed since the anti-government uprising began two weeks ago. It’s hard to say for sure how many have been arrested or “disappeared.” One thing is for certain, it’s an all-out technology war with one side using internet tools as a means of expression and the other side using them as a means of oppression.

It’s a surreal world of extremes where the army is guarding the protesters from the police and nobody quite knows what is going on. With thousands of people using social networking tools — Twitter, Facebook, email, IM’s, texting, etc., there is an overload of information streaming in and out and it’s hard to follow who is doing what. In an odd new development, a Google executive named Wael Ghonim has now become an unexpected celebrity after being jailed for 12 days. He is also thought to be the anonymous activist that created the Facebook page first calling for the Jan. 25 protest. This all makes for a revolution mash-up where high-tech gadgets and web-savvy individuals have somehow managed to get the attention other uprisings have only dreamed of.

However, as the demonstrations continue, things are getting even weirder, as rawstory reports: 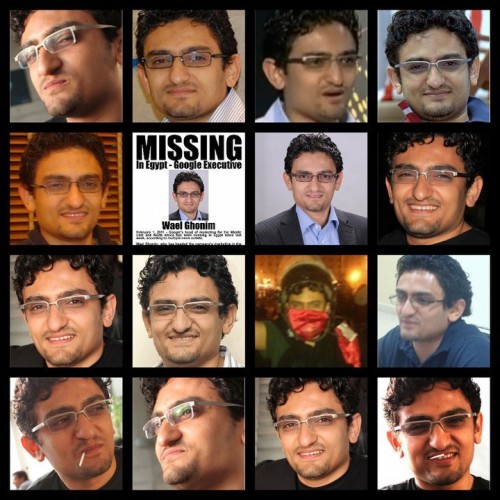 Many protesters carried the symbols of the Internet social networks Facebook and Twitter, which have become vital mobilising tools for the opposition thanks to online campaigners like Google executive Wael Ghonim.

“I like to call it the Facebook Revolution but after seeing the people right now, I would say this is the Egyptian people’s revolution. It’s amazing,” he said, after he was mobbed by adoring supporters in the crowd.

As the Google executive has become a rallying point and people are feeling as if they are making progress, there is an ominous thing happening. Police are tracking and locating social media users by their ip addresses and then their street addresses. I guess it was only a matter of time before the Egyptian government started showing up on doorsteps and beating the hell out of people they discovered were using Twitter. All they had to do was get the service providers to cough up their names and user IDs and then they could “lock and load,” as Sarah Palin puts it. Most people, after all, use their real names on Facebook. Hell, most people list their real birthdays too, and as cool as it was to conduct a revolution using social networking tools, a backlash was inevitable. What one hand giveth the other hand taketh away.