Five questions to SFMOMA artists, staff, or guests. Today, answers to more than five questions. Anna Parkina is an artist who lives and works in Moscow. Her work includes collage, sculpture, and performance. This Thursday evening Anna will perform in the Wattis Theater at 7 p.m., in conjunction with the opening of her New Work exhibition on the 2nd floor. 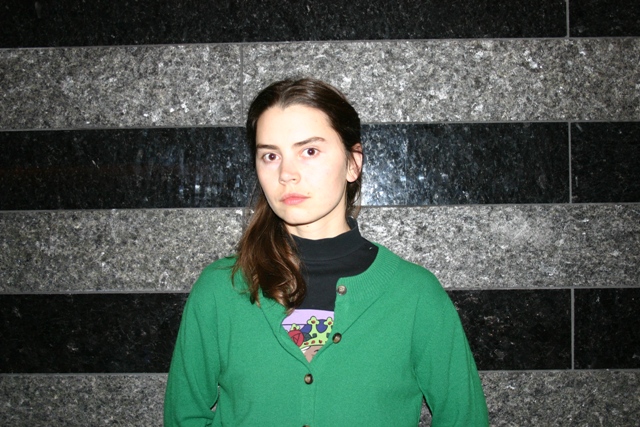 Anna Parkina in the SFMOMA atrium

No. I have nothing to say about it. I don’t collect anything. Sorry.

I would like to have dinner with Mandelstam, a Russian poet who was killed by the Soviet regime in the ’30s. It was a very poor time in Russia, there was nothing to eat, so I would be delighted to eat any food that would give him pleasure. I would like to have dinner with Osip Mandelstam and his wife. I would like to talk with him about Dante’s masterpiece, Inferno. He’s a very important poet, one of the best Russian poets, who lived in the beginning of the century and belonged to the Acmeist movement in poetry. It was a hard time for Russian artists and poets because either you agree with the regime or, if you refuse, you get killed. Many people were scared of talking, scared of living. As I said, there was a big food problem. So to me, it’s a situation to have dinner with this person because it was a time when you could not sit and have a dinner quietly. It was impossible. That’s why I would be delighted to have this dinner.

Only one? It would be the artwork of Max Ernst, he’s my favorite artist. Usually I can look for a long time at his artwork. There’s always something new to look at and to learn from. I don’t know which piece exactly, maybe one of his pieces from when he moved to America and started to make these crazy, interesting textures in his oil paintings, which were inspired by the American desert. Interesting surface and interesting patterns. That’s one of the artworks you can look at for a long time.

I’m Russian and when I go to another country, usually they ask me some questions about Russia and Russian politics, and I’m surprised when it doesn’t happen this way. I would expect you to ask me this question.

Do you want to answer that question?

What about telling us about your exhibition at SFMOMA?

I’m installing the show, and there’s a series of collages in the exhibition. The title is Fallow Land. It’s an interesting title in relationship to the idea of fertile ground and virgin lands. I call it this because my art is visually related to Constructivism and Soviet propaganda artwork. I find this period of time in Russian history and art history very important, but I’m not necessarily inspired by it. I think that it’s important to give the time and give rest to the ground. For me the Constructivism of the ground, which was explored very vividly and profoundly during the ’30s and then even after that, I think we really need to give rest to this period of time. Just as the nomad people who come and work the ground. They work the soil and then they give rest to the soil, otherwise it will not bring any harvest. To me it’s important to take a break from this period of time and then come back after a certain amount of time — almost one century — and work this ground again, but from a different position. I’m not coming to this matter as a person from the past and not just as a person from the future; I have an ancestral relationship to the matter. This exhibition is about heritage and roots and what is important to take and what is important to leave.