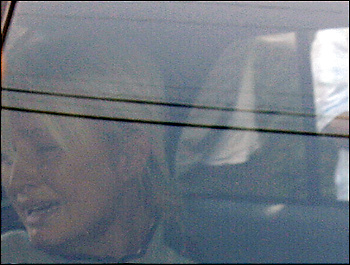 Nick Ut, Paris Hilton is seen through the window of a police car as she is transported from her home to court by the Los Angeles County Sherriff’s Department in Los Angeles on Friday, June 8, 2007, 2007; Associated Press Images; © Nick Ut/The Associated Press

In 2004, I really wanted to try and watch 1 Night In Paris, or at least to try and see what it looked like. The stills that accompanied news articles about its release made it seem like a painting: the scene seemed so green, filthy, the Rembrandt-light of surveillance footage. Not real sex with real bodies, but colliding glass and Black American Express cards.  The sex of 1 Night In Paris was not caught by paparazzi — instead it’s an extravagant display of self-administered surveillance. Unless you’re suggesting Paris Hilton could be her own paparazzi. Which I’ll buy.

Nick Ut’s Paris Hilton is seen through the window of a police car as she is transported from her home to court by the Los Angeles County Sheriff’s Department in Los Angeles on Friday June 8, 2007 is part of the magnificent Exposed show on the third floor of the SFMOMA. In the next room there’s another photo by Ut, the famous picture of Phan Thị Kim Phúc running naked and screaming from a napalm attack in Vietnam. The pictures, as it happens, are taken on the same exact day, 35 years apart. The first time, the uncanniness of standing in front of the older picture and glancing at the wall text, the syllables of the artist’s name slowly infiltrated my consciousness and expectation, leading to the recognition that these were works by the same artist. I hurried back to Paris.

Another critical note about Ut’s picture of Hilton going to jail is that it is, by all including his account, a failure. It’s the photographer next to Ut, Karl Larsen, who takes the finally canonical shot of Hilton’s tears. It’s Larsen’s that will light up the perfunctory Google image search. Ut’s picture, in stark contrast to the overcast horror in the photo of 1972, almost appears as if it were taken in the same room in which One Night In Paris goes down. Only in daylight. You can’t see the stars in daylight, but, you know, they are there.

Ut’s photo is cut more or less in half, diagonally, with a reflection of … what? Another car’s door? There’s something gorgeous about how whatever it is divides the picture into two, since the experience of seeing it generates a stream of doubles. The spectator and the commodified object (the photo), the photographer and his subject, the inside and outside of the cop car, and ultimately the tears of Phan Thị Kim Phúc against the tears of the heiress. There are two men in the background, not cops. You can’t see their faces, but their bodies look ambivalent, tired, already over the drama of the scene. And in that way they echo exactly the soldiers lining the road down which Phan Thị Kim Phúc runs. 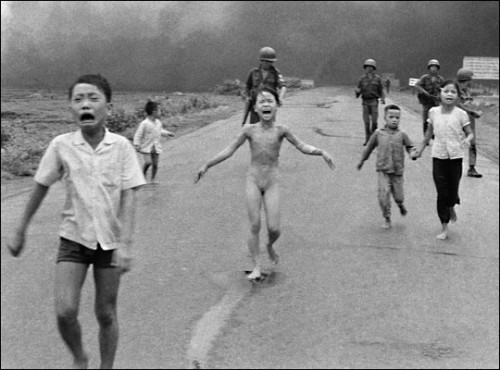 You can’t see but infer Paris’s tears. Her mouth is open, eyes closed. Mid-sob. The photograph freezes the sob into total expectancy, and thus prolongs it eternally. The very left part of her face is cropped, the vertical line bisecting her right eye where it meets the glass of the cop car. The eyes of Paris Hilton. I read a gossip blog that ridicules one of her eyes for being “wonky.” The blogger calls her “Wonky McValtrex.” As a talisman I adore it. I adore saying the syllables: Wonk-y Mc-Val-trex. Looking at Ut’s photo, though, I experience such radiant pathos for Paris that his pseudonym for her sounds excessively mean. Wonky eyes crammed tight and sieving tears.

Where the line crops her eye and meets the glass of the cop car, a gleam of red — the flushed cheeks of Paris meet the red, swirling light of the juridical. The rouge, howling light of the police. When I lived on Shotwell Street, the guys on the street would always indicate the approach of a squad car by a shrill whine. Onomatopoetic neighborhood solidarity. “Mrs. Officer.” But in the picture, what is the source of that light? The police? The paparazzi? The picture feels like it’s being taken in the car, it’s so close, highlighting the impossibility of proximity. The rest of the car is a kind of dull metallic gray, in slight contrast to Paris’s cute jacket and total contrast to the thrumming reds and that bright light of warning. The space between the back of Paris’s head and the boy’s jacket is in the exact shape of a black tornado. The gloomy tornado of squad car interior. Exactly bisecting the photo vertically, it makes the distance between her and the boys allegorical. I fought the law and the law … well …

The cop car itself is a metonymy for a world into which Paris is not prepared. I’ve relived her walk from the mansion to the car over and over, the whole walk made infinitely more uncomfortable by the din of photographers and reporters. Far from the mere translation of her body from the comfortable psychoarchitecture of the manor to the pre-prison confinement of the squad car’s backseat, the walk in my mind represents the initial experience of the juridical in the life of Paris.

Obviously, on second thought, her whole life had been an experience of the juridical: as a very rich person whose money derives from the subjugation of slave labor around the world, she had of course lived through the juridical as it strove ceaselessly to protect and maintain her wealth and power. So what I should say is, this walk from the house to the car is a walk to the other side of the law. An intense experience, no doubt. And Paris Hilton is hardly the only person to burst into tears in a similar situation. I mean, arrested.

On Saturday I stood in front of Paris Hilton for twenty minutes or so. It felt like a long time, and soon I was looking just as much at the faces of people encountering the image. Nobody lingered for very long that I saw, but if there was any response it was generally a smile. An affirmation or memory perhaps of the spectacular event of Paris Hilton going to jail. But nothing extreme. No obvious displays of sympathy or pathos, no acknowledgment of Paris’s pain. The affective response to the photograph of Phuc couldn’t be more different. That photograph provokes a space of historical or imaginary recognition, a consensual feeling of horror, perhaps. This feels like a catalogue of the abbreviated palette of contemporary feeling: attraction, repulsion, and steadfast ambivalence. Thumbs up, thumbs down, no comment.