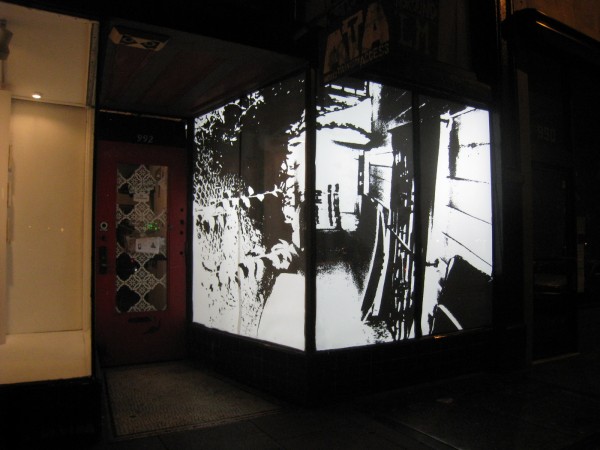 John Koch’s solo debut, Interpenetrations at Right Window Gallery closed a little over a week ago, but it was such a joyous surprise of a show that I wanted to share it with those who may have missed it.  Consisting of a large high-contrast photograph blown up to fit the full frame and right angle of the window and back-lit with fluorescent lights, one needed to position oneself on the far corner across the street to allow the image to unfold, and even then, it refused to give itself completely away.

Being both graphically bold and mysteriously subtle, the image hovers between the painterly and the cinematic. One could just make out though the industrial fuzziness of the stark blown-up image, an iron gate against a long wall of a building on the right, and a fence on the left that can barely contain the blooming foliage that grows through and over it. When the sides come together, a path is revealed where we can almost walk into the image itself. But where that path leads to, the threshold of where the image wants to take us,  is coyly just out of reach of recognition, leaving us contained in an inert feedback loop of unfulfilled desires.

It was a stunning effect to witness in person. But it wasn’t the first time I’ve been surprised by him.

I first met John Koch (pronounced “Coke”) 20 years ago at a Thanksgiving dinner hosted by the artist D. L. Alvarez. He was wearing a hand-made felt wizard robe with a matching pointy hat, and he may or may not have been on some form of hallucinogen.  I had just moved here from Ashland, Oregon to attend the San Francisco Art Institute, and was newly dating my current partner for about a month, when he invited me over  to D.L.’s to meet his friends. What a time! I don’t really recall the food, but with an endless supply of cheap thrift shop costumes, wigs, a make-shift photo booth and just enough drunken drama, that night was my first introduction to the kind of no-holds-barred DIY  Bohemia I rarely see these days. Just a bunch of restless transplants from small rural towns or suburbs getting freaky on their own terms. 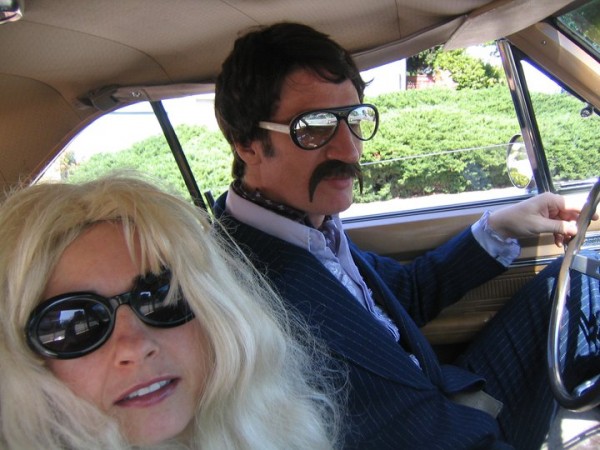 At 6′ 4″ tall with the sculpted facial features of a Roman Emperor, John may not have, until recently, considered himself an artist, but he is a larger than life work of art in a way. I know of no other person who has such a positive effect on people. He has a magical presence that is instantly engaging, like Rosalind Russell as Auntie Mame, ready  to grab  your hand and whisk you away from the humdrum and ordinary. He has brightened plays by Kevin Killian and Dodie Bellamy as well as videos by Karla Milosevich and Craig Goodman, often in scene-stealing cameo roles such as Annie Leibovitz or Grace Jones. His Leibovitz in Kevin Killian and Larry Rinder’s play, The Red and The Green was eerily dead on.

I had first seen his experiments with high contrast photography a couple of years ago when he documented the band I was in with Karla Milosevich, Kota Uetsu, and Cliff Hengst called Oranges. It was a tribute band to The Fall created for the show, I am Kurious Orange, curated by Anne Colvin at David Cunningham Projects.

He made us look instantly glamorous, without us having to try. 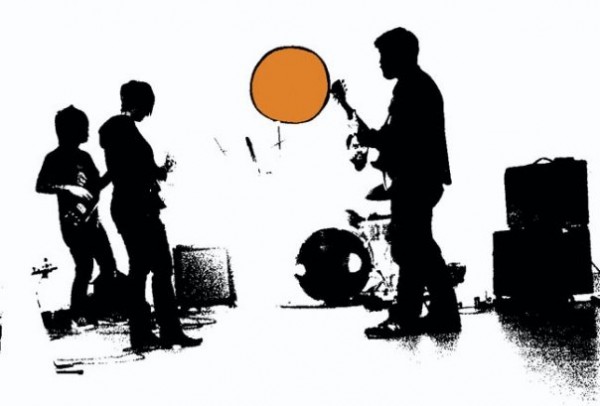 But what John may be most (or least) known for, is his active involvement with the Bizzaro-world video collective, Authority Office. Hmmm, how best to describe? Basically their videos  are  alter-ego carnival vignettes that surrealistically mock corporate cultural identity through punishing inspirationals and a luridly sublime desecration of the remains of vintage media’s age of innocence.

They have hundreds of videos on Youtube, mostly under a minute long. Check them out. You’ll love them until you puke.