Andy Goldsworthy: Big Tears (Part 1) and A Gift to the Backyard (Part 2) 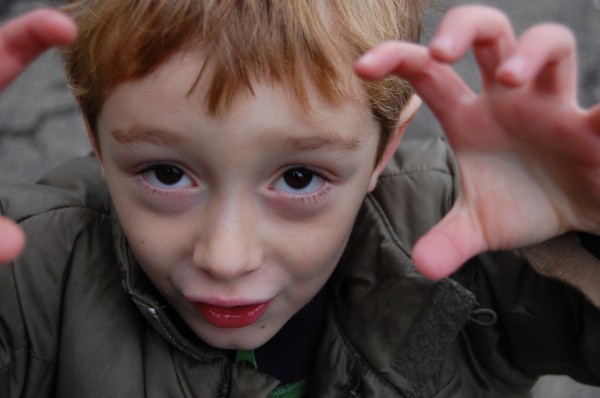 In early December my son Sam and I sat down to watch Rivers and Tides: Andy Goldsworthy Working with Time (Dir. Thomas Riedelsheimer, 2001), the amazing documentary about British artist Andy Goldsworthy. Sam is five years old and in kindergarten, and is all about Star Wars, Hot Wheels, and superheroes. However, growing up with me and his creative father (Steve), he’s seen his fair share of art exhibitions. I thought it would be fun to watch Rivers and Tides and talk about what Andy does, and then maybe go out and try to create some environmental works on our own.

A rocky start … Early in the film Andy builds an amazing stick form (see video below) on the shore close to a body of water, and Sam is thoroughly enchanted. “Mommy, let’s build one and play in it!” Racing ahead with filmic compaction of time, the form is swept up by the tide, gently begins to break apart, and floats away. In the film, Andy is thrilled. At home, Sam is silently crying next to me. Bottom lip sucked in, and big fat tears roll down his face. That was the precursor to the onset of a full on torrent of sobbing. In between sucking in air and sniffing back snot, Sam declares, “It’s all gone! He worked so hard (sob) and made that cool fort (sob) and built it too close to the water and and and and and now it’s ALL GONE.”

Holding my Little Rabbit close, I quietly turn off the movie and begin a conversation about the beauty of impermanence, and what “temporal” means. Small children live in the moment, and can be deeply moved by perceived disruptions to their notion of the way things “should be.” I was made fully aware in a sweet moment that this film, Andy’s work, and our quiet conversation were going to change the way my son views and comprehends his world. Sensing that he isn’t totally buying in to the value of making things that won’t last, I also see that he’s curious, so we turn back to the film. A moment later Andy eloquently and simply explains that his works are “gifts.” Then Sam got it! “That fort was a gift to the ocean,” he says, gesturing excitedly. And later he concludes that, “those leaves are a gift to the earth,” and “those sticks are a gift to the wind.”

Although Goldsworthy (born 1956) has been on the international scene for a couple decades, Sam reminded me that those not well acquainted with contemporary art practices might still find his work and his process mystifying and magical. The works involve you in the process of their creation. By this I mean that although the more permanent sculptures and photographs (which function as performance and site-intervention documentation) are aesthetically compelling as objects and images, one is always completely engaged in wondering what the artist had to go through to create the works. Where did the materials come from? How long did it take to create? How did he decide on that shape, form, or pattern? What is the relationship between the site and the objects? This is what Sam and I talked about both after the movie was over, and again as we planned our backyard interventions.

We made three gifts to our backyard on a cold, crisp afternoon in December. 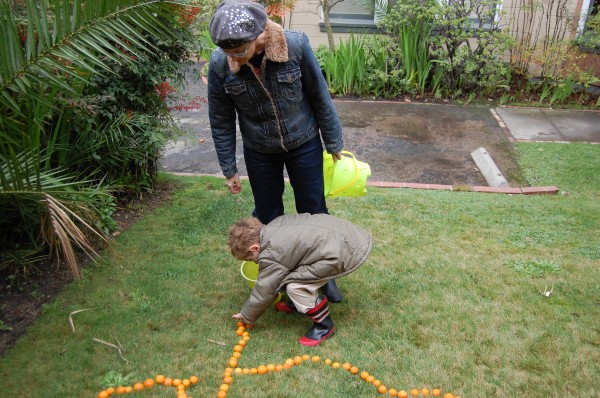 Working hard – mandarinquats from our tree. 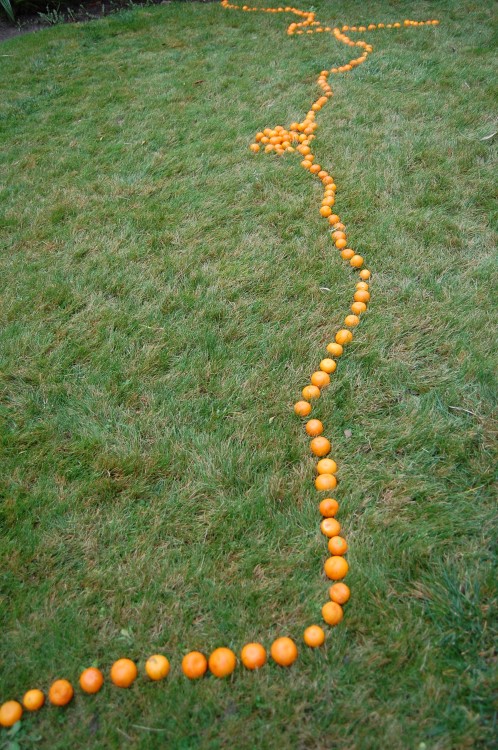 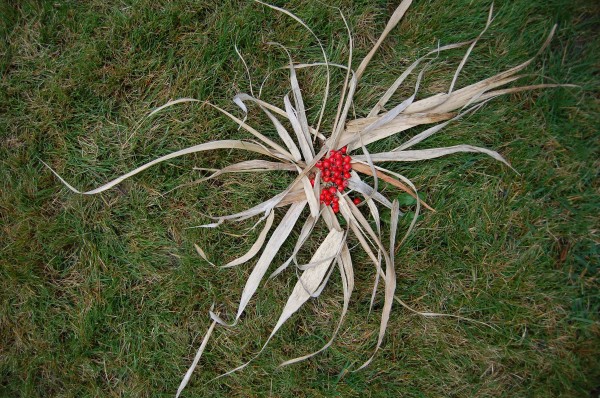 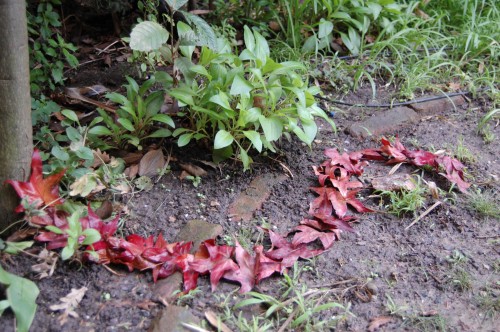