To Various Persons Talked to All at Once

Because this is my last post for 2010 I wanted to reflect on a few photographs I took when I was living in San Francisco. Having been away from the Bay Area for almost two years now, there are certain moments I recall vividly, in full color and in 3-D, if you know what I mean. One such moment was when I was taking pictures at Southern Exposure in 2005, I think, when I happened upon Larry Sultan, Jim Goldberg, and David Ireland talking together. 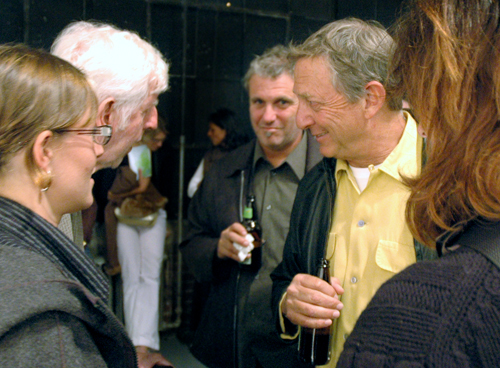 Of course these three guys had been key figures in the Bay Area art community for decades and have done as much as anyone to help shape the art culture there.  Trying not to break up their interaction, I gave up any pretense of taking a good picture. I think Jim Goldberg saw me coming before I even knew I was going to take the picture. That kind of ESP sense is something he just seems to have.

David and Larry both passed away in 2009, but their impact is still strongly felt. David started the Capp Street Project and did a lot of work at the Headlands Center for the Arts. He was a man of many talents and came to art only after first living a romantic life as a safari guide in Africa. Strange but true. David was one of those gregarious people who was also a great cook and would have a dozen guests over for dinner at his house and it would be delicious. Also his Capp Street Project hosted residencies for interesting artists from all over the country, exposing them, often for the first time, to Bay Area audiences. Similarly Larry collaborated on a number of interesting conceptual art and public art projects with artist Mike Mandel and later became very well-known for photographs of his parents in their suburban home. SFMOMA presented a large exhibition of Larry’s in 2004 called The Valley, a collection of portraits of porn stars he had somehow made the acquaintance of. The two of them were consummate “people persons,” if one can say that. Great humor, could talk to anybody, knew everything about everything. That’s why this moment sticks in my mind.

Another picture that pulls me back to San Francisco is this one from 2005, when the San Francisco Art Institute brought in the seminal sound and performance artist Terry Fox to do a summer class. Terry had been an important part of the Conceptual art movement during the 1960s and 1970s in the Bay Area, along with Paul Kos and Tom Marioni, Doug Hall, Chip Lord, William T. Wiley, and others. They produced a lot of very of interesting work, to say the least.

And as a testament to their teaching many of their students (Bruce Nauman, Karen Finley, Nancy Rubin, etc.) went on to have amazing careers. But Terry was different — he was the quintessential expatriate Conceptual artist who went traveling around Europe doing art shows, living the good life, and making installations that always had a poetic edge coupled with an interest in language and its construction. His best-known work is a performance that he did with Joseph Beuys in 1970 called called Isolation Unit. I met Terry a few times and he told me that he just sort of hung out at the Kunstakademie Dussledorf where Beuys was teaching. When he saw him he asked Beuys to do a collaborative performance & Beuys said o.k.. Then they just went and did it. No pretentious bullshit, just one artist to another. But that was just one of Terry’s many interesting works. He passed away in 2008.

When I lived in San Francisco I lived in Chinatown. I was at the corner where North Beach, the Financial District, and Chinatown meet. At times it is so noisy and crowded you would think you were in Times Square. But you weren’t. 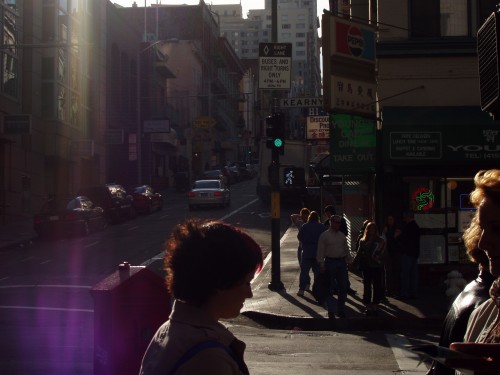 This is a picture I took one morning on the way to work. It is at the corner of Sacramento and Kearny, right at the bottom of Nob Hill.

Because of the numerous tall buildings in the area there would often be pockets of bright light reflecting off the plate glass windows illuminating whoever happened to step into the reflected glare. It’s a very common occurrence in the Financial District — periodic bursts of angelic soft, glowing light filling a space where ordinary passers-by suddenly and unwittingly become lit up as if they were movie stars on a movie set. It’s no wonder so many car commercials are made down there. The corner is also in the middle of an area filled with amazing architecture. The buildings combined with the dramatic light were backdrops for many movies, including Will Smith’s The Pursuit of Happyness and Michael Douglass’s The Game. But regardless of all the noise, all the traffic, and all the people, every morning it was my corner.

However, at night my neighborhood changed. Chinatown shuts all its produce markets down by about 7:00 p.m. As it gets dark, and because of the strip clubs nearby, people sometimes did crazy things – spontaneous things. 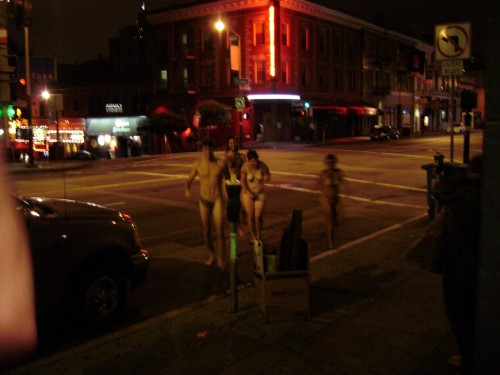 For example — one night I was out walking and saw this group of naked people running around. It was on Kearny and Broadway. They were streaking. I guess streaking used to be a big thing in San Francisco, but more so in the 1960s and 1970s. I am used to seeing half-dressed junkies on the street or mentally ill people taking their clothes off to freak people out — but streaking? Who does that anymore? They were all laughing, so maybe it was a dare. But they had been running around in circles — both the guys and the girls. With their penises and breasts flopping up and down it just seemed really weird. They didn’t seem drunk and they weren’t hurting anyone, but I knew I might not come across another scene like that. So I took this picture as they inexplicably walked towards me. This image reminds me of the San Francisco attitude. Free, unafraid, wide-eyed, open and up for anything.