In Search of Christopher Maclaine 11: The THE END Tour - A Work in Progress 9: PAUL A

This is the eleventh in a multipart series unofficially conjoined to the publication of Radical Light: Alternative Film & Video in the San Francisco Bay Area, 1945–2000, and the accompanying film series currently being presented by the Pacific Film Archive and San Francisco Cinematheque (in partnership with SFMOMA).

With my friend Brian Darr, proprietor of the great Bay Area cinephilia blog Hell on Frisco Bay, I’ve been scouting out the San Francisco locations used in Christopher Maclaine’s Masterpiece, THE END.  What began as an attempt to identify and document what physically remains of the often mysterious places at which THE END was shot has evolved into a larger project to also analyze the film, and to identify all its many actors and extras, all of whom appear uncredited. To read the full version of these preliminary remarks, including info on how YOU can participate in this project, click here. For further information on Maclaine, check out the intro , which serves as this series’ hub. For the previous post of this Tour, click here.

NEW FEATURE: a Youtube of the PAUL episode is viewable here.

NOTE: portions of Maclaine’s Voice-Over narration are transcribed in italicized sections. The images, for the most part, are stills documenting many (but by no means all) of THE END‘s shots. Those unfamiliar with this film will probably want to watch the video clip found above first, before making their way through the (hopefully enjoyable) notes and explication. 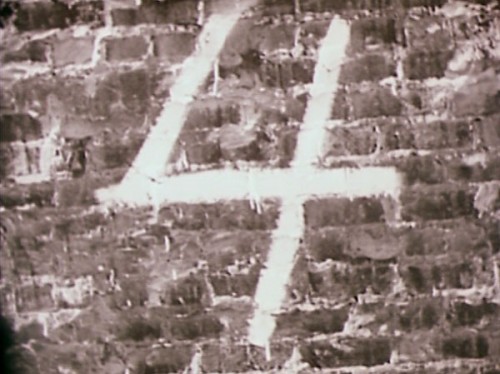 1) We now come to the fourth of THE END‘s major characters, PAUL. With WALTER, CHARLES, and JOHN, we were plunged into the main gist of Maclaine’s take on the modern world circa ’53: chaotic desperation. With Paul, we are about to encounter a lighter version of the “Maclaine Man,” one characterized by philosophical resignation and simmering melancholy. 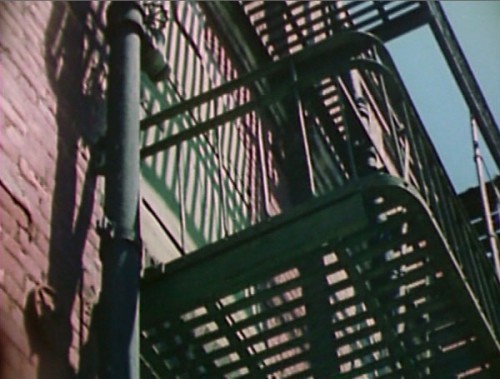 2) We enter PAUL’s episode with Jordan Belson’s camera tilting down to take in the apparatus of the fire escape of the Haslett Warehouse on the east side of Hyde St. 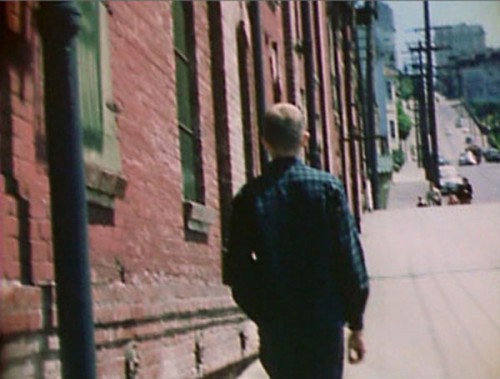 3) The camera finishes its downward tilt to find PAUL walking south up Hyde towards Beach St., and the ascending Russian Hill, as if having made a blessed escape from the workaday world via the metal staircase just shown. Paul is played by none other than the Tour‘s patron saint, Wilder Bentley II. 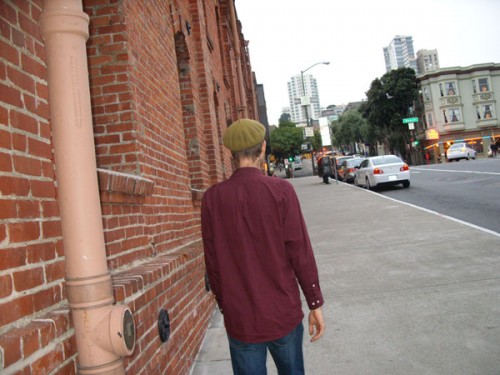 4) Ah, finally a semi-appropriate role for Brian to model! Of all THE END‘s characters, he certainly has the most in common with Paul — tho this isn’t really saying much, for the non-angst-ridden type, of which Brian is an example, really isn’t dealt with in Maclaine’s film. One might notice the Haslett Warehouse has seen substantial refurbishments over the years, the most recent round possibly being occasioned by a fire in 2002 which gutted the Warehouse, and damaged the adjoining Cannery, causing its temporary shutdown. Ironically, the fire escape seen in picture 2, above, is no longer extant. 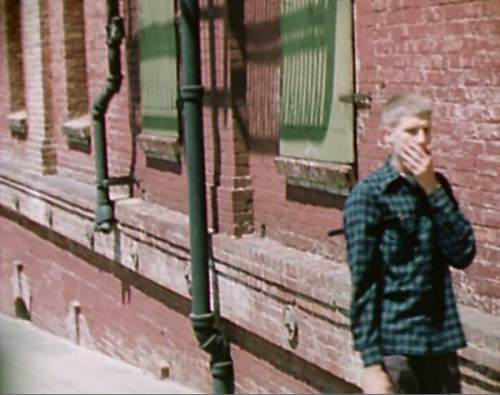 5) No sooner is Paul’s face shown, than he engages in a characteristic gesture: the covering of his mouth by his hand, as if to prevent himself from revealing an unpleasant truth, or to stifle a scream. Despite whatever hints Maclaine as the film’s narrator offers to the contrary, this ascetic, monkish figure is a haunted man. 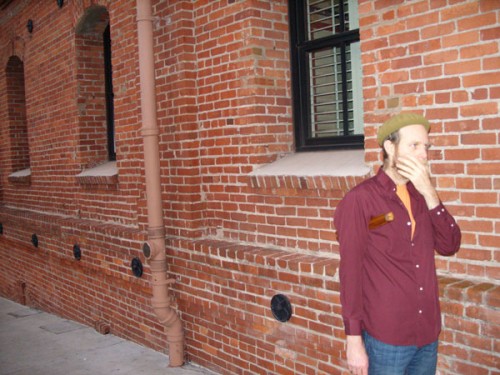 6) Brian standing in as a haunted scream-stifler. 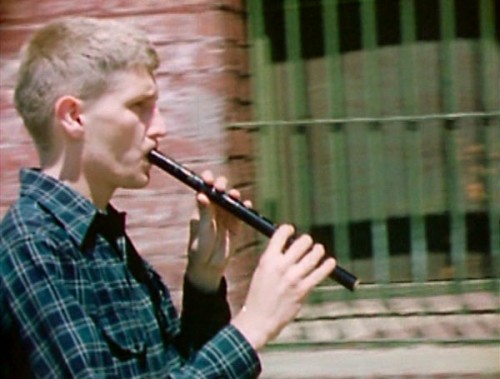 7) Of all Maclaine’s major characters thus far, we are given the least background information with which to evaluate Paul and his situation. Why is his life “pointless”? We can only attempt to figure this out via his appearance and behavior. In this, the second shot in which we see Paul’s face, the young man whips out a flute from under his arm and begins to play. My impression is that such behavior in a Beat cultural context would be seen with at least mild approval, but Maclaine uses it as a key element contributing to a comic portrait. 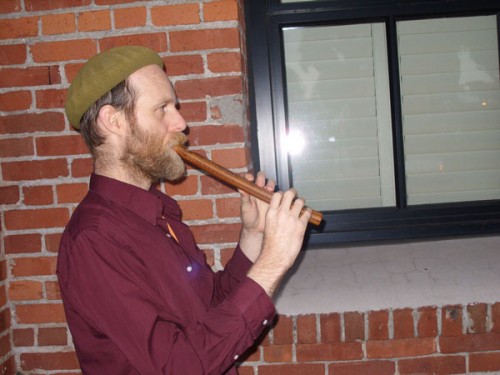 8 ) Brian playing his own flute. 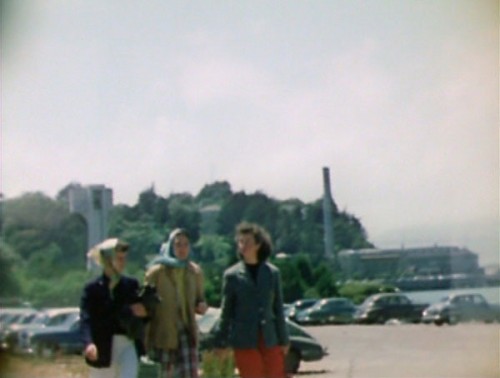 9) A trio of (unidentified) appropriate potential consorts for Paul are presented.

As evidenced by reflections not visible in this still, the shot it’s from appears to have been taken through a window of a building near the Aquatic Park Bathhouse (or possibly from within the Bathhouse itself?), facing Fort Mason. Because of the many changes which have occurred in this area since ’53, Brian and I have been unable to pinpoint the exact location of this vantage point, but research continues. 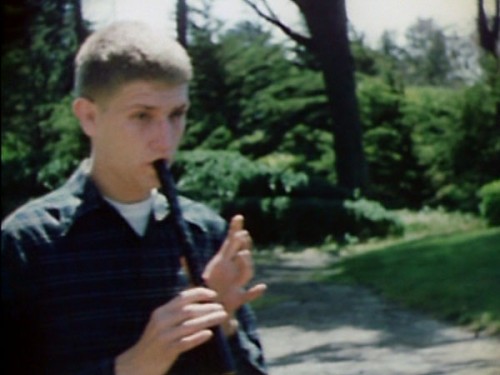 Human love was for him impossible.

10) The trio of potential consorts is summarily dismissed. Why “human love” is “impossible” for Paul will not be spelled out, but as with previous “Maclaine Men,” he appears to be trapped in a narcissistic, self-involved state, albeit, in his case, one evolved in a decidedly nonviolent direction. If THE END is Maclaine’s Divine Comedy, with the author playing Virgil to our Dante, the previous major characters have supplied us with a vivid tour of his Inferno. Paul’s story will be a brief stay in Purgatory. 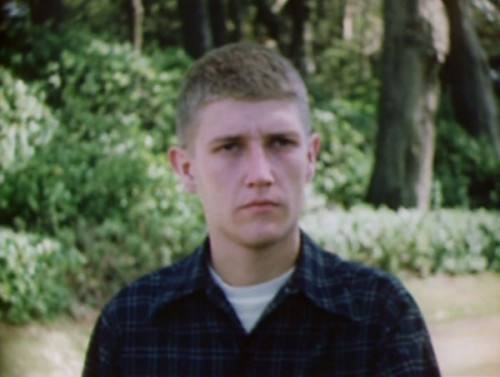 11) This serious young man is prepared to follow through on the logic of his convictions with action. His decision for “sacrifice” seems to be taken while he stares at the figure of a lion carved in stone. From the shot portrayed in picture #10, above, through the end of the Paul segment (with the exception of the last shot), the remainder of his section of THE END appears to have been photographed in Sutro Heights Park. 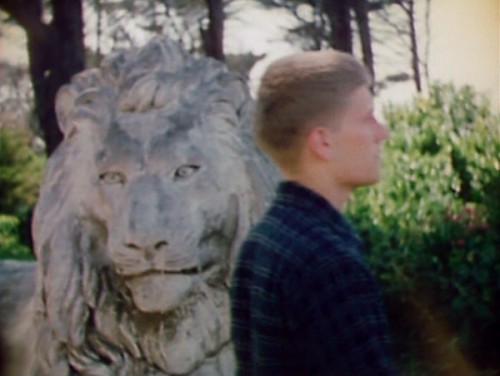 He would give himself to the most hideous human being …

12) Is Paul’s self-“sacrifice” in the manner of Christian martyrs in the Circus of ancient Rome? Or is he assuming the role of “philosopher king,” inspired by the “noble” “king of the jungle”? Or, perhaps instead Maclaine is suggesting this magnificent beast carved in stone evokes “the most hideous” if considered on a standard of beauty as judged by that seen in the human face? 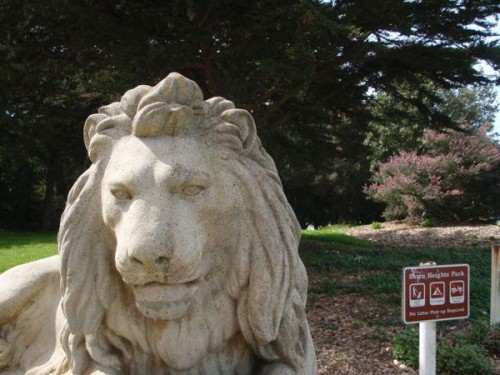 13) A recent photo. This handsome fellow is part of a duo of stone lions guarding the main entrance to Sutro Heights Park at 48th and Point Lobos avenues. Unfortunately, he’s not the lion portrayed in Maclaine’s film, but a replica made in the early 1980s from Sutro’s “original” replica of statuary by Belgian sculptor Guillaume Geefs, as detailed in this interview with John A. Martini. 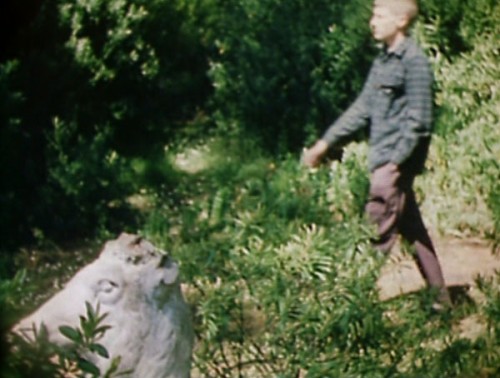 … he could find. He would go to a leper colony, and attach himself to the most …

14) Is this lone stag another model of “nobility” for Paul? 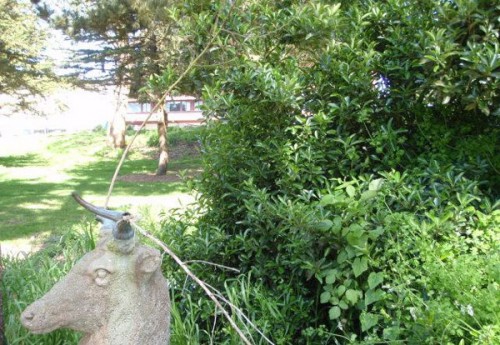 15) A recent photo in Sutro Heights Park, a bit down the road from the lions. The stag’s antlers have grown over the years. In fact, this stag, too, is a reproduction of one of Adolph Sutro‘s “original” replicas of European statuary, manufactured to grace his estate, the park portion of which was open to the public many years before the entire estate became a public — and now national — park. 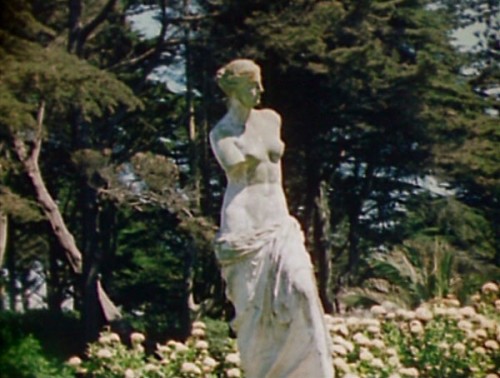 … hideous leper on the island as a nurse, a companion, and a lover, asking only that he be given the disease so that he might see whether it was possible for the leper to return that love when Paul, too, should become a leper, in fact.

16) In perhaps the most scathing bit of japery in Maclaine’s film, the Venus de Milo is cast as a “hideous leper.” (Paul should be so lucky!) Unfortunately, this reproduction of Venus, like much of Sutro’s “original” statuary, was removed decades ago from Sutro Heights Park. UPDATE 12/15/10: Historical consultant John A. Martini has supplied further details: “The statues all disappeared following the end of WWII and the mid-1950s, mostly as a result of theft and vandalism. (Ignore any on-line stories about them being removed because of WWII Japanese submarines; they weren’t. ) Their final fate is something of a mystery but there’s evidence gardeners buried the broken pieces around Sutro Heights Park. Today’s gardeners still occasionally dig up disembodied noses and fingers from the busted statuary.” Thanks, once again, Mr. Martini!

Click here for the sweetly melancholic conclusion to PAUL.

Click here for an interview with Stan Brakhage concerning Maclaine, circa 1986.

If you have any information or (nonpublic) feedback to contribute to the Tour, please click here.