Below, curators Sharon Lerner and Xiaoyu Weng provide some thoughts on the “Riot Show” event, organized on December 2, 2010. Find the preview post here.

On December 2, Julian Myers and Joanna Szupinska presented, as part of Open Space Thursdays, “Riot Show,” Myers’s archive of recordings of crowd disruptions at rock concerts. Where before he’d presented these records as a kind of lecture, this time he staged a listening party and open conversation, bringing in a small group of friends (including us, Erica Levin, Tarek El Haik, and Fiamma Montezemolo) to comment, alongside the larger audience. 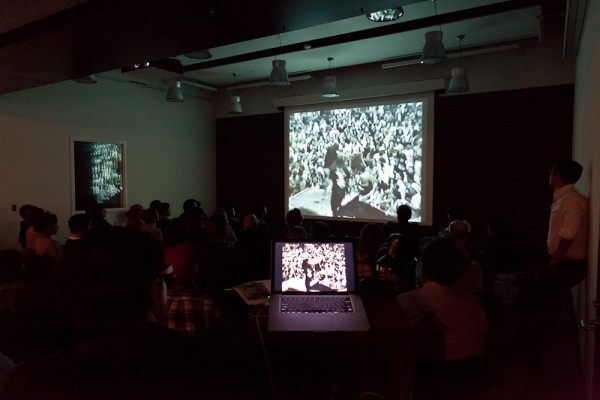 He began by playing a few of the tapes, including an excerpt from Duke Ellington’s 1956 concert at Newport, a sort of predecessor of a riot situation in a mass concert; Public Image Limited’s bizarre 1981 audio-visual performance at the Ritz in New York; and the pièce de résistance of the evening, a video-recording of a riot of epic proportions at Guns N’ Roses’s 1991 show in St. Louis.

Along the way the audience made some sharp observations and raised several questions. Among them were the overtly different natures of each riot situation, and the changing roles of recording technologies at live concerts. But a discussion about the political potential of riots prevailed — in particular the dynamics at play for dispossessed working-class audiences, when a spectacular event does not meet their expectations.

In that sense, the St. Louis riot was not only a straightforward retaliation to the band’s onstage meltdown and conflict with the crowd, but also, as Anne Walsh noted, a successful attempt to mount an alternate spectacle, aimed symbolically to compensate for the absent satisfaction. 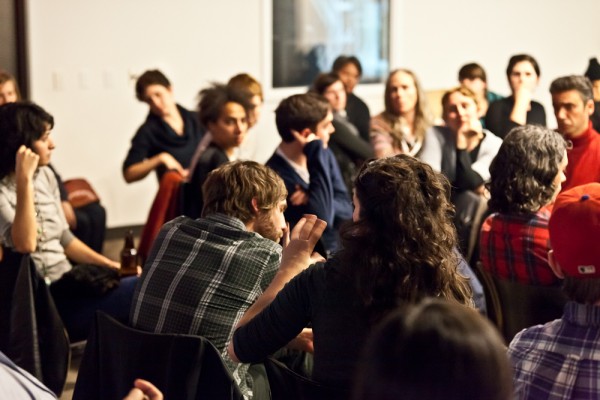 However, the question remained: were the actions a conscious negation of the system or merely an ambivalent anger led by carnival sensation? And ultimately, can we find a redemptive potential in this ambiguity?

As Julian has pointed out, in his essay and in the event itself, there are many entryways to his archive. It does not conform to any given typology, and perhaps actively resists categorization. However, it certainly offers many things for discussion — including a couple that were sidelined in favor of the political discussion. For example, one interesting feature of the archive is its emphasis on the culture of bootlegs, as well as its aesthetic of Xeroxed, rundown, bit-crushed, fragmented, and abstracted visual material — an aesthetic that resonates with the landscape of chaos and debris after the riots themselves. 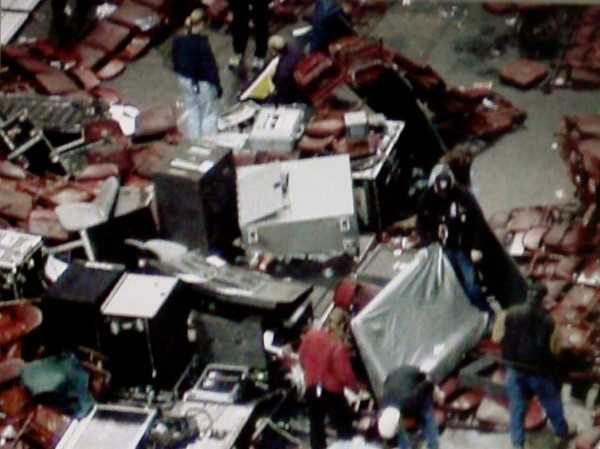 What lies behind this formal fascination? Far from being an empty visual form, this aesthetic is specific to both an historical moment and a form of social exchange.

The emphasis on the bootleg points towards a DIY mode of production, and directly involves issues of distribution and accessibility. The aesthetic registers this mode of exchange, an alternative economy that resists various attempts to commodify or mystify these events by the recording companies and others.

We’re particularly interested in how this aesthetic of fan culture and trading might translate into other contexts and historical moments. Originally peer-to-peer sharing was underground, and accessible only to a small group of people. Now, through the expansion of the Internet, bootlegging appears as a mode of resistance to censorship (as it is in contemporary China, for example), as a direct reaction to economic constraints, or simply as means of informal exchange subtending the market.

Against the presumed clarity of a crisp, high-definition world, where every single event can be scrutinized to the point of exhaustion, the coarse quality of these recordings — and the alienation and distance that they promote — seems to exacerbate the ambiguity of what was recorded at the time, or at least to reopen these events we think we already know to further debate.