Bay Area Ecstatic, my first programming effort for an SFMOMA film show, plays this Thursday, 7 p.m., in the Phyllis Wattis Theater. Note to followers of The THE END Tour: this week’s post has been preempted by this exploration of later forms of Bay Area ecstatic cinema. Please enjoy, and check back next week for your next Maclaine fix, the conclusion to JOHN. 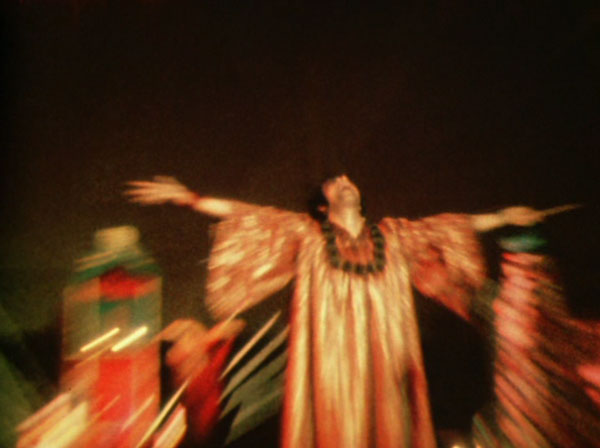 Kenneth Anger in his Invocation of My Demon Brother

Cinema has always been suffused with magic. In cinema’s earliest days, audiences were instantly taken by and with its illusions, famously ducking a seemingly oncoming train from the big screen. A bit later, a Western bandit who appeared to fire a pistol point blank at viewers received the same treatment, followed by delighted calls for the film to play again. A couple years after the first public exhibition of a movie, Georges Méliès introduced “trick photography,” transporting his many avid viewers to the moon, or to a visitation with the Devil. More than any other aesthetic medium, film draws those who partake of it into rapture, and often profound identification with its subjects. Cinemas are magical catharsis boxes, and film — at its best — is nothing less than a modern, technological form of what Mircea Eliade designated “ancient techniques of ecstasy” via the subtitle of his classic book Shamanism. When director John Boorman was researching his production of The Emerald Forest in Brazil, he visited an Amazonian tribe that had had virtually no contact with the outside world, and spent many days with their shaman, Takuma. Boorman relates: “Takuma asked me what I did, and I realized how difficult it was to explain what the cinema was to someone who’d never seen a film or television screen in his life. I described the abrupt shifts from one scene to another, the way editing enables one to move back and forward in time and space, and he suddenly seemed to understand, telling me that it was like the experience of a dream, where you change from one place to another, from one person to another. When I added that my work was creating illusions, he declared that we had the same magical activity, scaring people and perhaps curing them.” 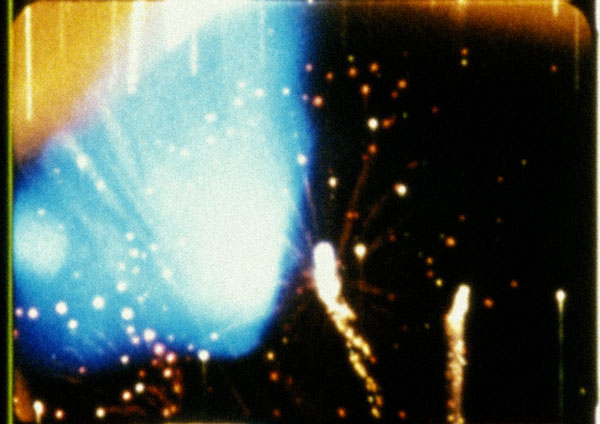 When I interviewed Stan Brakhage about Christopher Maclaine in ’99, he necessarily provided fascinating details about his own periods of activity within the San Francisco film scene (as brief and halting as these were). In subsequent years, it slowly began to dawn on me there was a hidden genre within experimental cinema to which our fair city played mecca. In the avant-garde, I’d always been attracted to lyricism and grandiose Romanticism — to those who disdained arid academic theory, and instead sought directly through their work to transform reality, to remake the world. San Francisco, even before it had cause for its reputation as America’s most radical city, captured would-be filmmakers of this type from across the country by seemingly impossible-to-resist tractor beams: Bruce Conner, Lawrence Jordan, Bruce Baillie, Will Hindle — all these giants-to-be were lured by what they’d heard of San Francisco Renaissance culture and the Beats, as well as, no doubt, images of the city’s fatal beauty. The alternative, of course, was New York, but all that city’s bustle and required hustle dissuaded: SF was a city of relative ease and true possibility. As Brakhage wrote in Film at Wit’s End: “All little boys and girls in Kansas stand in cornfields and imagine that New York is the Emerald City … The closest that we came to it, at least for me and many of my contemporaries, (such as) Bruce Conner, was San Francisco.” Utopians were humored and, to some extent, even nurtured here, and it was therefore no accident that the Bay Area became the locus of much of the swirling cultural and political tumult of the 1960s. The film culture that evolved here in fits and starts, and fully flowered in the ’60s, was, above all, a spiritually oriented cinema with the intuitive aim of bringing humans into contact with the totality of their being. Whether expressed via the full-on Surrealism of Sydney Peterson; the mysticism of Maclaine, Belson, and Harry Smith; the visionary dreamscapes of Lawrence Jordan; or the radical humanism of early Bruce Baillie, this was an Ecstatic Cinema.

As it came time for my interview with Brakhage to be published as part of Radical Light: Alternative Film and Video in the San Francisco Bay Area, 1945–2000, I realized it was time to pursue this hidden genre, and conceived the project of an oral history to document major figures in the movement. No sooner had I returned, a few months ago, from a several days’ journey to the state of Washington to interview Bruce Baillie, then I was asked by SFMOMA Associate Curator of Public Programs Frank Smigiel to program a film show this fall. A show exploring potential thematic avenues of this project seemed a natural choice.

As I imagine it, this oral history-to-be, An Ecstatic Cinema, will embrace many disparate modes of filmmaking — from whatever can be gleaned in the collective memory regarding the largely lost rhythmic abstract animations of hipster/trickster Hy Hirsch, to the outrageous, visionary camp absurdism of George Kuchar and Curt McDowell. Thursday’s show focuses on several of the major figures of the Great ’60s generation, and on a few of their key successors who came of age in the ’90s. 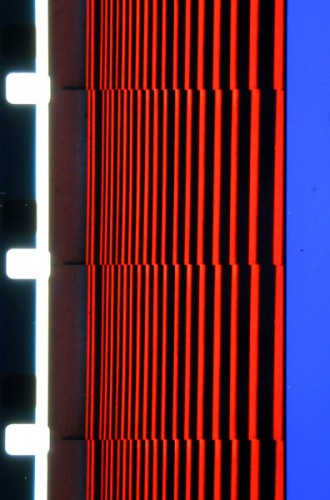 Possibly the first work of psychedelic cinema, Lawrence Jordan’s Triptych in Four Parts (1958) is both a significant work of Beat art and one of the major auguries of late ’60s American culture. A portrait of the San Francisco circle involving artist John Reed, Wallace, Shirley, and Tosh Berman, and poets Michael McClure and Philip Lamantia, Triptych swiftly evolves into a grail-quest in search of the “sacred peyote grounds” of southern Texas. Though best known for his ecstatic animation, Jordan is also a tremendously accomplished live-action filmmaker, and graceful camera movement and dreamlike editing make the rarely screened Triptych arguably the masterpiece of these latter efforts. Ten years after Triptych, Will Hindle released his legendary dream-play epic, Chinese Firedrill (1968). Similar to the enigmatically allusive manner of Kafka or Gravity’s Rainbow, Hindle’s film, featuring the artist himself as its lead, narrates the fractured tale of an Eastern European WWII refugee as he mulls over the remnants of his memory and material possessions. Laced with wry humor and graced by Hindle’s extraordinary technical mastery, Chinese Firedrill is perhaps experimental film’s supreme monument to Mystery.

Jordan’s and Hindle’s films partake, to some extent, in the manner of fractured, Dionysian filmmaking characterizing much of their era, including the remainder of Bay Area Ecstatic‘s ’60s offerings. John Luther Schofill’s Filmpiece for Sunshine (1968) belies its hippie-sounding title to essay the portrait of Steven Sunshine, a young SF State film student trapped in a maze of heterosexual frustration while experiencing the first inklings of the pull towards identity and soul quest. Framed around a pulsing soundtrack of primal ’60s pop-rock hits, Filmpiece is one of the great undersung masterpieces of ’60s experimental film, its self-assured style resembling a collaboration between Bruce Baillie and the Scorsese of the ’70s. Invocation of My Demon Brother (1969) is, for this writer at least, the last major work of Kenneth Anger. Future Manson Family member Bobby Beausoleil portrays his Lucifer in scenes shot in Anger’s late ’60s home, the Westerfield House on Alamo Square. Featuring a Moog synthesizer soundtrack by Mick Jagger, and additional imagery gleaned from Anger’s far-flung travels, Invocation is a gorgeous and eerie melange, and is by far the most evocative cinematic rendering of the occult world of Aleister Crowley. The last of Bay Area Ecstatic‘s ’60s works, Bruce Conner’s LOOKING FOR MUSHROOMS (original version, 1959–67) is the most characteristically Dionysian, its splintered, rapid-fire editing jolting the viewer into an entheogenic and ecstatic identification with the cosmos. Culled from years of shooting in San Francisco and Mexico, this not-quite-three-minute-long psychedelic journey is Conner’s crowning achievement in color cinematography. Bay Area Ecstatic will be presenting the ONLY currently circulating print of Conner’s original version, receiving its MAIDEN voyage through a projector for an audience this Thursday.

Similar to contemporary filmmakers who at times address the formal apparatus of filmmaking in the mode of meta-cinema celebration or critique, ’60s filmmakers drew attention to the textures of the celluloid experience for the psychedelic purposes of examining and questioning the very fabric of being. Underlying this filmic culture was the intimation of a hidden, occult reality behind the everyday world, a deeper reality of heightened experience and transcendent meaning available to one who could “break on through to the other side.” The unfortunate fallout of ’60s and ’70s drug culture and the sexual revolution led later generations of Romantic celluloid artists to become far more modest in their metaphysical aspirations. Ecstatic connection to being is found, rather, in the physical creation of their works, and by savoring the provocation of the ecstatic response in viewers for the few short moments of their duration. 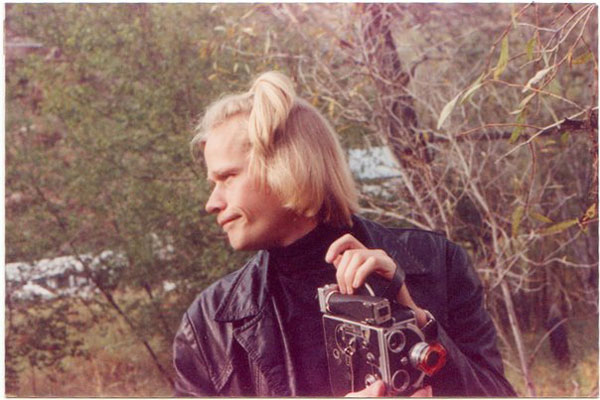 Bruce Cooper has spent most of his life in his native Colorado and his adopted home in an outlying region of Chicago. For a year or two in the early ’90s, however, Cooper made San Francisco his home while shooting his early experimental narrative epic, Romance in Solitude (1993). Inspired by Bruce Baillie’s Quick Billy (1970), Cooper’s Romance climaxes in a prolonged sequence suggestive of the life-after-death experience of the film’s protagonist as he transitions to the Beyond: a 100-foot roll of double-exposed and edited-in-camera footage of an incarnation of San Francisco’s annual Chinese New Year’s parade. Rarely has hands-on Bolex operation been so inspired — Cooper and his camera dance with the paraders in distant, yet harmonious, connection. The results, sometimes projected on their own under the title Firepage (1991), represent some of the most dynamic in-camera editing ever achieved in 16mm. Timoleon Wilkins, also a Colorado native, came into his own as a filmmaker during the many years he lived in SF. Wilkins’s prolific artistry is rooted in filmmaking as an informal spiritual practice, a kind of prayer enmeshed in the artist’s everyday existence. The Crossing (2007), like Firepage, suggests the transition of a soul through various states of consciousness, but is probably more accurately described as the last abstract glories of Kodachrome, memorializing this period in which that most glorious of color film stocks is passing from our lives. Kerry Laitala, born and bred in Maine, has made San Francisco her home and base of operations for most of the last two decades. Her Retrospectroscope (1997) documents her astonishing installation work of the same name. Described as a “pre-cinematic device” whose “function is to create the illusion of movement utilizing large-format still images,” the Retrospectroscope evokes a dragon’s eye, the Wheel of Fortune, and the crazed proto-cinematic invention of a mad scientist of the 1880s — all at the same time. Laitala’s film gives the ecstatic treatment to an already ecstasy-inducing subject, making for a five-minute experience akin to watching a sorceress wrangling lightning bolts in a dark, mystery-laden cavern.

Bay Area Ecstatic makes clear that generations of San Francisco Bay Area filmmakers are united in the impulse to connect to the magic of the ecstatic response, a psychological and physiological reaction of the entire human nervous system. What greater motivation for getting into contact with the depths of the soul could there be than ecstasy? 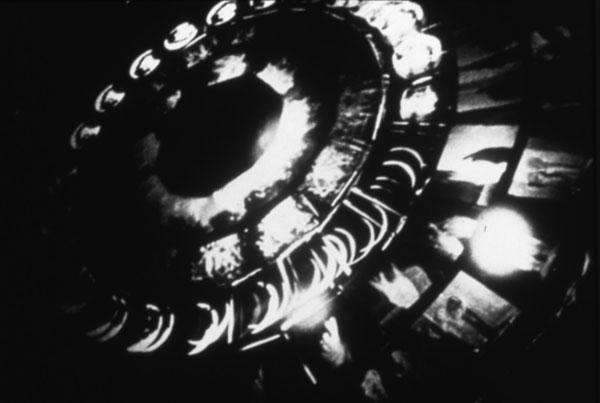