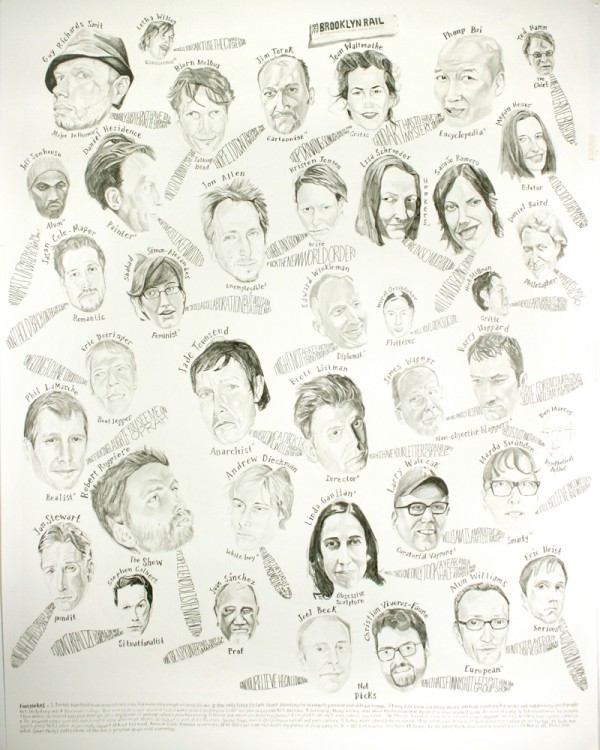 William Powhida, work from the exhibition This Is a Work of Fiction, 2007, Schroeder Romero Gallery, NY

This past spring during New York Amory Week I found myself locked out of my Brooklyn sublet. Calling on another friend in town from San Francisco, I was happy to discover him and a new acquaintance at a local watering hole across town at three in the morning. He had shared a cab from Chelsea with a stranger who turned out to be Amanda Browder, the current New York bureau chief for Bad at Sports. The three of us talked shop (unrecorded) into the morning hours. At one point Amanda pointed out William Powhida across the bar, stating (yelling actually), “He is making the most important art right now!” This occurred several times, confirming her sincerity.

I wanted to return to his work and some of the topics discussed that morning with the audience here on Open Space, so I emailed Amanda and asked what made Powhida’s work so interesting, appealing, and most importantly — IMPORTANT.

The following is an exchange of a few emails:

Amanda Browder: I like Powhida! I am super-interested in how the art world has made him our representative for the “underground Brooklyn-based artist.” The NY Times has used him as a voice of opinion on the Brooklyn Museum character, and Jerry Saltz has adored his work by making him one of his “fav aritsts” in a past year’s Best of NYC for New York Magazine. Go, Powhida! My question is, can an artist who challenges the art scene which keeps him afloat maintain an upward trajectory? Will he have to make a change in 3 years to update his look (à la Madonna)!? I hope not, at the same time I wonder how challenging his work is when there is a sense of excitement when you see your face/name/haircut in any of his drawings … is there a similarity between being in his work and seeing your name in the NY Times (disclaimer* I am in one of his drawings, and have helped in a show him and Jennifer Dalton put together at the Winkleman Gallery. The show was called #class) … AND do Jerry Saltz, Zach Feuer, Dana Schutz, etc. feel more “underground” when they are seen in his drawings? Does Powhida facilitate that? And does it need to be via “fine art”?

Brion Nuda Rosch: You ask some pertinent questions. I feel someone like Powhida will be challenged to reinvent his work at some point (he already has), and that may very well come from his own artistic pressure within his process more so than outside factors. That is to say, these movements in process are natural and due to one set of factors (internal or external), shifts occur. Someone like Powhida will do that gracefully, we may not even notice till looking back and the art world will accept his progression with open arms. Artists, critics, curators, and directors will continue to look for themselves in his work because they are naturally narcissistic (or in the very least interested in how others perceive them). Yes, seeing your name or your haircut in a piece by Powhida is similar to seeing your name in the New York Times, but I can also look towards our tendencies to check in on how many people liked or commented on our wall post (disclaimer* I have done this, and I have also “liked” Amanda Browder “posts” as she has done the same for me). On a grander scale, Mark Zuckerberg has made an interesting interactive art piece with his project called Facebook. In part it has formed into a dysfunctional meeting ground for the art world. I say “dysfunctional” because I am still not sure of its value in actual terms of productivity. I wish I could honestly say that my assistant has been spending time on Facebook sharing links and making witty comments like “I just farted,” but that has all been me! My assistant is actually working the studio! (disclaimer* I do not actually have an assistant.) Can you tell me more about #class at Winkleman Gallery, as I feel this is the example of Powhida moving forward and reinventing his work. Bringing his lists and drawings into a meeting place examining “the way art is made and seen in our culture and to identify and propose alternatives and/or reforms to the current market system.” How productive were these exchanges? Was the honest intent to be productive or was it more a work of art unfolding as a happening? Maybe both? 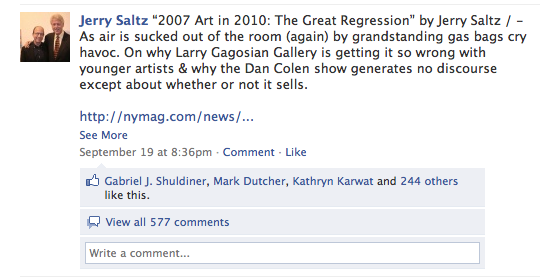 Amanda Browder: Facebook is a location for the art world that more people need to talk about. Jerry Saltz champions the use of Facebook as his own personal subconscious chatter list. Using Facebook as a platform for “art conversation” I think can be good and annoying. First it seems as if the posts are closer to what I imagine should be on Twitter. Quick, lighthearted, ill-researched, and off-the-cuff. I feel like when we started Bad at Sports podcast we were hoping to create this type of conversation … but under the umbrella of familiar discussion over a beer or coffee. In the written form on Facebook I feel like it reads like a text message, “LOL! 😉 OMG I love that Dan Colen show at Gagosian! He, and the work, are H.O.T!” It saddens me a little. In relationship to this is the word accessibility. Facebook opens up the place for us to chat more and have open conversations. We all are ABLE to connect with Jerry’s inner daily thoughts, but in my feeling we are inundated by so much information that this endless chatter thins our thoughts and makes for less credible new ideas. But how can I judge?! We are doing the exact same thing via the blog. You say potato, I say Basquiat! I think where Powhida falls into this is that he is channelling the ego/celebrity construction of these figures that chatter in the art world. Maybe even giving them a few boundaries to think about as they balloon in popularity. If you have a chance to see the new Brooklyn Rail paper, there are two new drawings by Powhida, representing the “Game” of the New York art world, [that] allow you the viewer to follow the tumultuous art-life possibilities. Roll the dice! It’s all about chance and luck.