The Brain in her Arms: Octopus in Space

Our host for next week’s Open Space Thursdays conversation event is artist Jessica Tully. She’s invited cephalopod expert Richard Ross and author and environmentalist Adam Werbach to join us in a participatory parlor game, as we consider the possible civic implications of the myths and metaphors surrounding the otherworldly octopus. 7 p.m. on the second floor, free with museum admission. Come! 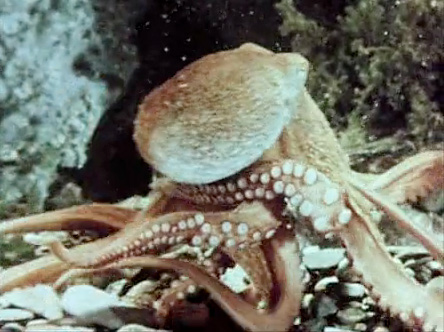 • What are the civic implications of shape-shifting?

• What is the connection between fluidity and flexibility when confronted by conflict?

In 1928, French marine biologist and filmmaker Jean Painlevé, an anarchist with strong surrealist tendencies, made a black-and-white silent film called The Octopus. It is one of the earliest known films featuring the terrestrial locomotion and life cycle of a cephalopod. Painlevé also developed a prototype of the underwater camera, predating Jacques Cousteau’s underwater film innovations by two decades. Painlevé made psycho-sexual science films with mass appeal. His work scandalized both the French science and cinematic canons of the day. His early silent films showed the reproduction and respiration of cephalopods and sea urchins in mesmerizing detail. With the advent of sound, Painlevé’s experimental music pairings anthropomorphized sea horses, octopuses, and bats, revealing his deep poetic love for gender equality and other radical ideas. [Click image at top to watch a short clip from The Love Life of the Octopus.]

In 2001, the San Francisco Film Society led the creative resurgence of interest in Painlevé’s work by commissioning a live musical score by Yo La Tengo for his 1965 opus, Love Life of The Octopus. The band has continued to perform their music live to Painlevé’s silent films the whole world over.

For next Thursday’s event, I’ve proposed a new surrealist pairing using research video by a contemporary marine biologist. As a way to further investigate quantum entanglement as expressed in water, my idea is to make a participatory salon game centered around the creation of octopus forms in an open space. Luckily, I have a friend (of a friend) who is a marine biologist specializing in octopus reproduction and locomotion.

Dr. Crissy Huffard, PhD, didn’t laugh when I told her about my line of inquiry. She is the marine scientist who discovered that octopuses could walk as bipeds on the ocean floor when they want to. We met at her part-time bungalow somewhere deep in the Santa Cruz mountains. She spends most of the year in Indonesia and was preparing for a trip there the very next day. I explained that I was working on conceptual forms that could be used to investigate the octopus’s elegant, otherworldly characteristics and wondered if she thought there could be a potentially feminist and community-centered application for this inquiry.

She spoke to me about her field research on male-female pair bonding. She let me know, with a joyous twinkle in her eye, that the larger female octopuses are the most desirable, and that they spend most of their life eating as much food as possible and also mating with as many males as possible. She went on to note that these two behaviors often intersect with humorous results.

The dynamic articulation of their arms is made possible by a muscular orientation that runs in three directions: transverse, longitudinal, and helix. Also located in each arm is a concentration of neurons and erectile tissue that is decentralized from the brain. Dr. Huffard noted that only invertebrate appendages have this physical range, flexibility, and shape-shifting ability that allows them to — in effect — not have to think about what they will do next. And I thought to myself, “And so do break-dancers …” They, too, abandon themselves to the moment. Break-dancers’ bodies are so sensitive to the environment (the beat, the floor, and the cypher) no time is wasted sending messages back and forth to the brain; their bodies seem to just move.

After our meeting, Dr. Huffard gave me access to her entire 9-year body of research videos, selections of which will be combined with scenes from my most recent underwater video, Submersion, and set to an electronic score by the German electronica cooperative Raster-Noton. The remixed work will play on the walls of SFMOMA’s Koret Vistor Education Center as we unfurl a giant octopus, in collaboration with Richard Ross, marine biologist at the Steinhart Aquarium; Adam Werbach, author and environmentalist; and a live audience. 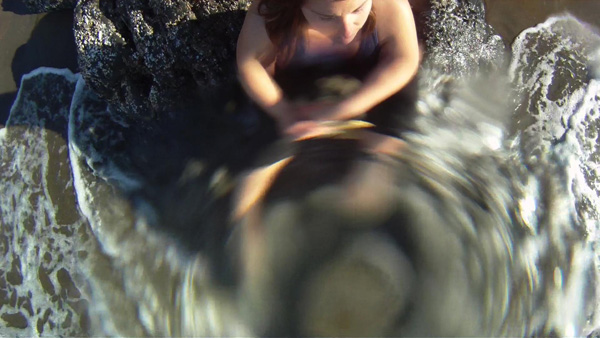 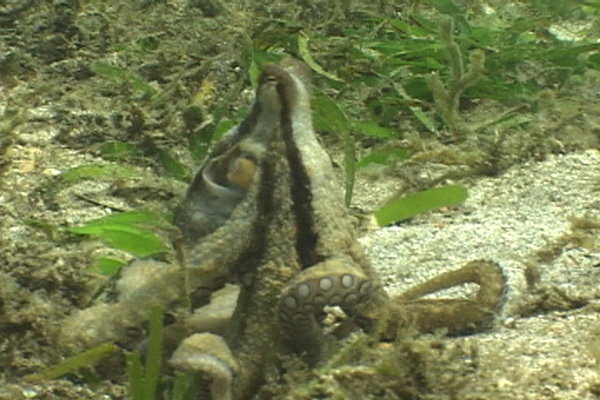 There is a fluid quality to the way I approach all work and play, my interest in the octopus being no exception. I’m pretty sure this interest in fluidity comes from the large amount of time I spent in water as a child. The mainstay of summertime recreational activity in the South Bay area in the late ’70s and early ’80s had everything to do with beaches, pools, creeks, and reservoirs. But it also had to do with the regional folk dances that were performed outdoors in urban environments (e.g., “popping and locking” as a Northern California folk dance phenomenon that eventually spread worldwide …).

Whether I’m alone or with my community, the technologies and sensibilities of water inform my being. I’ve noticed fluid feeling states have range — one moment is turbulent, the next, supple, and the next, still. I’ve also found this to be true for dancers and community organizers alike. From the set of practices associated with our regional hip-hop culture to Debord’s ideas of drift to the way aquatic organisms gracefully move through water, flow-state is paramount. Getting there involves developing an ability to synthesize radical abandon, precise focus, and profound trust into one. This process can also offer some pretty juicy ways of being connected to one another and to the planet.

I recently had an opportunity to look through the SFMOMA permanent collection for a Collection Rotation. Looking to unpack how other artists worked with water to make art and construct meaning, I found in the collection works made across time, in different parts of the world, and in many mediums, and I was struck by the interwoven themes of power, space, and femininity that surfaced.

So, it’s no surprise that when I was invited to design a temporary ceremonial structure for the Jewish harvest holiday, Sukkot, it took the form of an animal that embodies dynamic flow: the octopus. This reignited my octopus obsession. I knew way more about being underwater than I knew about celebrating Sukkot, but the building of a fort-like tent specifically designed for relaxing, sharing meals with family and friends, praying, sleeping, and making out (my addition) was a celebration in alignment with my spiritual practice as well as my propensity to relax. I was interested in creating a communal area in a form that had a round central space, was soft and sensual, and was activated by large octopus video projections you could literally get inside of. My goal was to question what new ways we as a people can relate to one another that are flexible, nonhierarchical, and interconnected — all sensibilities I look for in my art-making and meditations alike. 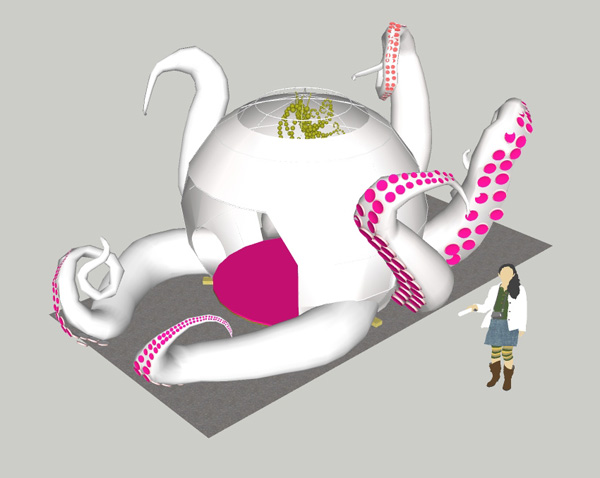 Dr. Huffard’s research fed directly into this exploration. The process of designing the Sukkah, the design itself, and the intention of the form converged. The project became deeply collaborative. I called on a few artist friends (five, actually) to help resolve the idea. Each of us had unique structural and aesthetic understandings that, when combined and interlocked, allowed the project to be realized.

To me, the artists who best mimic the dynamic movements of an octopus are dancers. An almost otherworldly expression of fluidity is fundamental to the California folk dance known as “popping.” This dance form has evolved endlessly from a misquoted “boogaloo” dance phase that occurred in the 1960s in Fresno to “tutting” today (refers to King Tut; a form based on the flattened hands found in ancient Egyptian art). My inspiration for flow in public space was formed by my exposure to this dance form. Take a look at this year’s reigning champion: a young woman named Pandora Fe; even as she just plays around, her movements and release embody flow:

This fluid quality in the movements and mechanisms of octopus locomotion can be found in temporary architecture, decentralized organizing structures, regional folk dance, and beyond. I’m here to wonder aloud if these expressions do anything to relax us. Do they bring us closer to the luscious interconnectedness of all beings, all things? And, if so, then what? 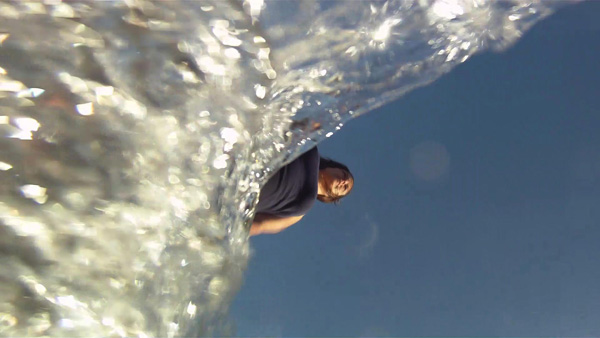 A special note of thanks to David Buuck for once again raising the bar by exposing me to Jean Painlevé’s work, and to Louis Fox for introducing me to Dr. Huffard and the concept of Kamiwaza (divine technique), which continues to influence how I understand the power of water and my place in it.  — Jessica Tully