For almost two years we’ve been running a regular “One on One” series of posts, featuring curators or SFMOMA staff on a single work of art from our collection. Beginning today, the column will feature artists, writers, poets, curators, and others, from around the country, responding in any manner they like on a work of their choosing. It’s a distinct pleasure to begin this new iteration of the series with a post from Patricia Maloney, editor in chief of Art Practical. 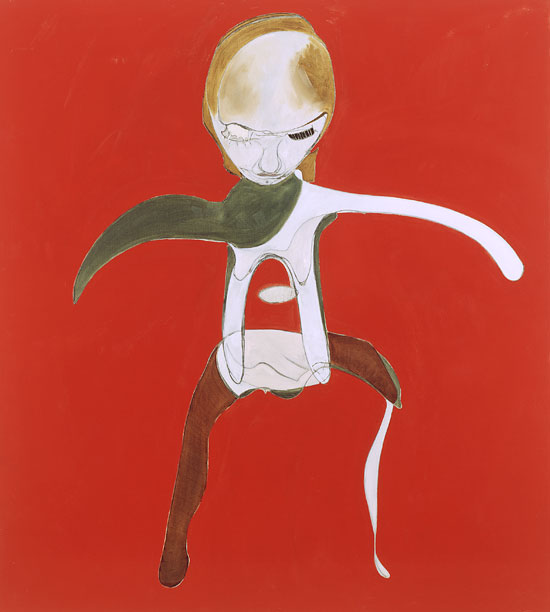 On September 11, 2001, I was walking down 6th Avenue and had reached 34th Street when the North Tower collapsed. The gigantic plume of smoke rising from the building was in my direct line of vision the entire time, but I have no memory of that moment. Nearly every other minute of that day is clearly delineated in my mind, but when I reach for that one, I arrive at standing at a dead stop in the middle of 6th Avenue, staring at the man next to me, who turns to me and says blankly, “The Tower fell.” I turn and look past him, at the Empire State Building, to wait for it to fall as well. It remains standing. The building across the street also remains standing. I am not sure why. There is a mushroom cloud rising in the distance in front of us. I need to keep walking. We have to get out of the city. Later that evening, I watch the building fall over and over on television, and it doesn’t jar the memory. It is gone.

That is what I think about when I look at Nicola Tyson’s oil and charcoal Red Self-Portrait (which, it is important to note, is from 1996, and, therefore, I am attributing some prescient mirroring magic to this painting to suit my own psyche). My memory of my lack of memory gets triggered because the figure is a morphing, tenuous form on the verge of dissolution into a sea of red. It concretizes Freud’s death drive; the impulse for self-preservation seems to be missing.

According to Freud, the conscious mind contains no memory trace; it is buffered against the constant onslaught of stimuli. Where that process fails, a shock is turned into a moment that is lived again and again, without comprehension or resolution. By this logic, I am well buffered, although I have a tendency to feel displaced, even after nine years. Living outside of New York puts a different spin on the events of that day. It was not because of the attacks that we landed here in California. My husband, Smitty, was offered a job, and we moved. It was good to come to a place where uncertainty is built into the day-to-day. Here, we expect buildings to evaporate behind the fog and for the ground to shift beneath our feet.

In New York, I worked at the Museum of Modern Art. Not the current building, which opened after I moved to California — and is still, despite repeat visits, a foreign place to me — but its prior incarnation. That was the museum I knew since my childhood, and the familiarity that I developed with some of the works in the permanent collection depended in part on where they were hung there. Now when I go to MoMA, I feel like my parents have moved to an enormous new house, and while I recognize the furniture, none of the rooms are familiar.

For three years, in addition to my role in the International Program, I worked with the Education Department, leading programs for children, their parents, and teachers. Matisse’s The Red Studio was a stalwart favorite. I spent a lot of time standing in front of it, asking the students sitting on the floor about what they saw. The things they focused on became very familiar: the creeping plant with its lollipop leaves curling around the small statue; the large, pink painting of a nude propped in a corner; the bronze and marble or plaster sculptures facing each other, as if in conversation. Invariably, the children would come to the conclusion that the room is a self-portrait of the artist, full of his favorite things and paintings. They naturally made the assumption that Matisse loved that color red, because of the way it absorbs everything. The objects — the clock, the dresser, the chair, the stools, and the edge of the wall — lose their weight and form. They become part of a continuous plane, distinguished only by yellow or blue outlines.

Tyson’s figure similarly hovers on the point of absorption. One wing-like arm, and part of her torso, is white, but most of her midriff is absent, a void through which the red penetrates.

She looks down, into herself. There is something both childlike and withdrawn about her downcast gaze, completely self-contained and unaware, resisting our awareness of her loss. She has no hands. Her arms and torso are like the bent prongs of a fork, resting on the flat plate that is her pelvis. The leg on which she balances is almost sheer; the other shrivels into a fragile, deflated balloon. She is young and old at once. Her breasts sag against her chest and the top of her head is a bald dome.

In Matisse’s studio, a grandfather clock stands in the center of the composition; it has no hands. Time does not exist there, just as Tyson’s figure will not be dislodged from floating, mid-skip, arms outstretched, one leg slightly raised. The following gesture, the one in which all the weight that is barely held aloft might come crashing down, doesn’t occur. She will not touch the ground. It is strangely reassuring.

Patricia Maloney is the editor in chief of the online journal Art Practical; a contributing writer to Artforum.com; and a frequent commentator on the weekly contemporary art podcast Bad at Sports. Maloney has received writing residencies from the Philadelphia Art Hotel and the Lannan Foundation, and holds her M.A. in theory and history of contemporary art from the San Francisco Art Institute.