The Berkeley Center for New Media and Berkeley’s Department of Art Practice recently hosted a gallery walk-through with some of the artists featured in Worth Ryder Art Gallery’s current exhibition, Knowledge Hacking, described as a project that “invites artists to use the university research environment as raw material for their work.” While many of the issues raised by this collaboration between BCNM and WRAG’s curator Anuradha Vikram deserve serious exploration, I want to mention here just one exchange that occurred during the panel following the artists’/curator’s walk-through. 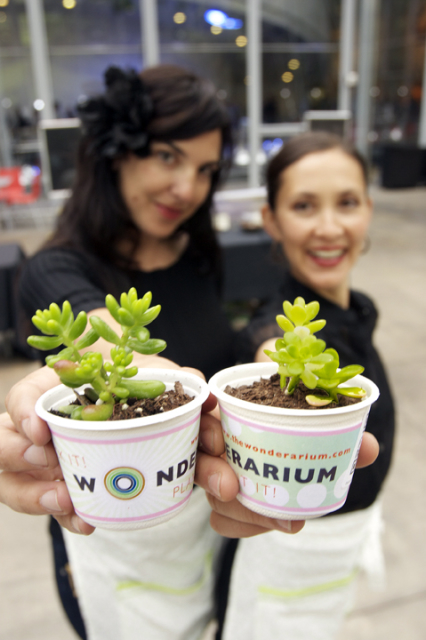 Oakland artists Yvette Molina and Sarah Filley were among the three groups chosen to “collaborate” with Berkeley researchers in the production of an artwork. Molina and Filley describe their project, Wonderarium, as “a public art proposal to enchant and reinvigorate our romance with nature at the heart of Oakland’s urban jewel: Lake Merritt.” While the main component of this project is to place a large, floating, spherical terrarium on Lake Merritt, another component of the Wonderarium is their Mobile Plant Ambassador, which they describe as follows:

[It was] developed to take plants “on the road” … [providing the] novel experience of building a terrarium directly from the cart. All supplies (glass containers, pumice, soil, and a variety of plant cuttings) are arranged by drawer in the order needed to make their very own terrarium. As participants express their personal creativity in four easy steps, they are also investigating themes of micro-systems and climates — a mini ecology class!

During the panel discussion, Molina stated that when they send the public home with a biodegradable, plantable Dixie-cup sample succulent, or with a mini-terrarium from the Plant Ambassador, they tell the new plant owner to think of the plant or terrarium as a “science project.” My hackles went up. My arm shot off my torso: “Why,” I asked from the audience, “when you are making the explicit choice to call Wonderarium an art project, do you contextualize this plant as an object of science rather than an object of art?” Framing the newly adopted succulent(s) with this language encourages close observation, Molina explained. I persisted. “But if your purpose in developing this project is to USE art as a seductive tool for the appreciation of nature, what do you gain by then calling your handouts ‘science projects’? And how does it really benefit art, as a discipline, a worthy pursuit, a form of research and reverie, when you teach your public that a practice of observation should be considered science? To my mind, you perpetuate a spurious and unproductive binary by doing so.”

As an artist, I know what it’s like to be on the other side of the panel table, having to field comments that are really statements disguised as questions. As a member of the audience, I was dismayed by what I perceived as the naiveté of Wonderarium, but also excited by finding a useful term with which to discuss the convergences and divergences of scientific and artistic practices. Observation. Within scientific practice, observational is counterposed with experimental study. In film-video history, an observational documentary is counterposed with something that might be thought of as more expressively, or rhetorically driven. Observation strikes me as a term one encounters rarely in the discourse around contemporary avant-garde visual art practices, and yet it’s not so far from the terms one sees more often. Artists experiment, strategize, deploy, examine, investigate, cultivate, work across platforms, mobilize, negotiate, interrogate, intervene, engage, etc. Even when they aren’t using those terms themselves, more often than not, the curators, historians, and critics producing discourse around and from visual art are using this language. I’m sure I am teaching my students to use it, and now I am glad to be asking myself why.