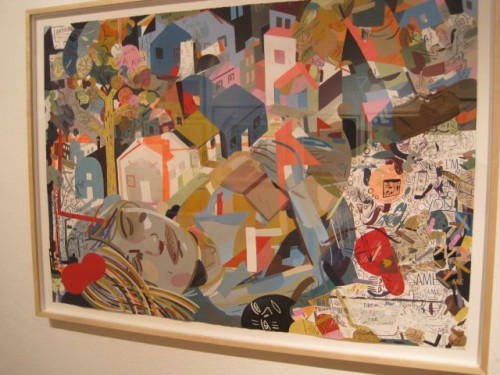 I first saw Jason Jägel’s boisterous, hectic painting on the walls of the first Bay Area Now show at Yerba Buena Center for the Arts, here in San Francisco. Wow, when was that — 1996, 1997? Jägel continues to this day to produce some of the headiest, craziest, and most beautiful work in California. I’ve wanted to write something about him for eons, but hitherto I haven’t felt up to the challenge of engaging all its complexities or its music. But, now, I figure life’s too short, I might as well plunge in, even with an incomplete understanding. Three recent developments — one a show, another a book, a third an edition — give me some texts to expand on. Then I went to visit him at his Mission studio and got some more of the juice. 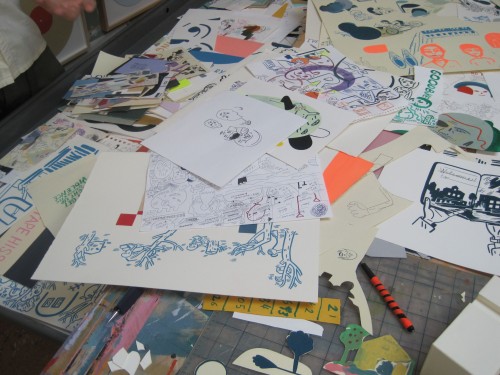 The cute little Fifty24SF gallery on Fillmore Street, around the corner from Walgreens, had a great show for Jägel this past spring. I’ll Fly (Into Your Heart) it was called. He gets so into his install that the white walls were decorated here and there by impatient doodles, created while working out some problem of presentation. Or was that the illusion the artist and gallerist wished to create?

In any case his genius is vast, almost Whitmanic in its profusion. It overflows the space into which it is meant to fit. Thus it has analogues to sexual energy, even to nuclear energy, so issues of proliferation and “overseeing” complicate this painting. Is this the case with all graffiti, or just when something resembling it feels the confines of the gallery’s four walls? 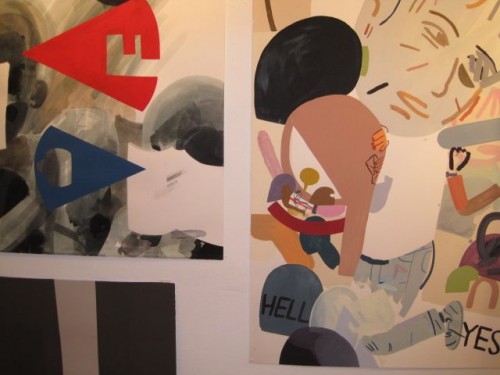 The squirming, vehement figures that writhe up and down his picture plane have always put me in mind of social struggle. Jägel speaks of his work in formalist terms, but I am tempted to relate the upheaval in his painting to his turbulent family history. John Weir Jägel, his father, was a Yale-trained, Boston-based painter and teacher; iconoclastic, free-wheeling, the son of an opera singer, he died in 2006. Jägel’s stepmother was the gifted poet Beatrice Hawley, who died at 41 from lung cancer; Denise Levertov introduced a posthumous collected poems in 1989. Then there was the South Asian strain: Jägel’s great-grandfather was the eminent Hindu Brahmin Dhan Gopal Mukerji (1890–1936), another life cut short — this time by suicide. Mukerji’s bestselling memoir Caste and Outcast detailed a trenchant path from India to American ways, and was reprinted by Stanford University Press in 2002. Jägel recalls that the symposium celebrating his ancestor’s achievements was held across campus on the very same day as his own M.F.A. exhibition. To move backwards and forwards, that’s the question. In the sunny light streaming through his studio, on a warm afternoon in the Mission, I’m studying his profile resolutely, thinking, oh this Indian blood is why he’s so piquant in person. 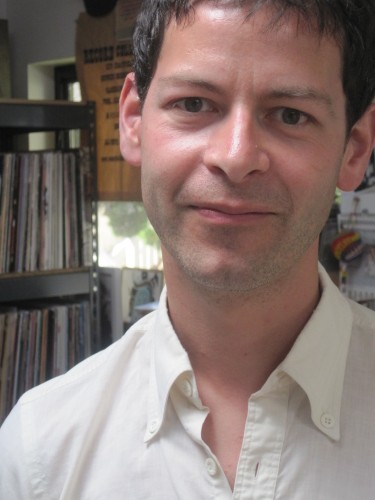 As a latchkey kid growing up in Boston, essentially middle-class, but with a bohemian background, he sought discipline in his artmaking. Jägel describes himself as a “failed comic artist,” noting that his work has twin sources, the “syntax of the comics” and the ragbag of cues and devices learned from his father and the realistic painting he espoused. He’s an ace raconteur, and his own accounts of his practice are so different from the way I’ve imagined them I gape. 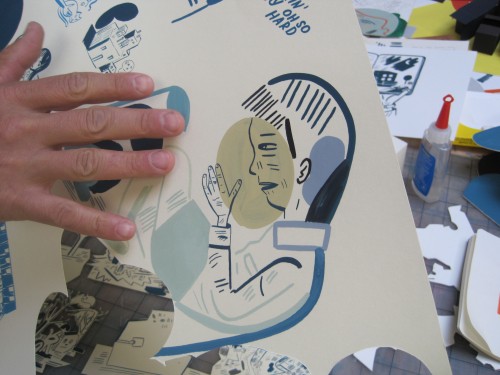 I do get the feeling that on some level he experiences life as an outcast. I ask him about color, the one element of his work that is consistently constrained. At first, he lets on, he avoided the violent signature reds of Barry McGee and Margaret Kilgallen; anybody would, for they had made those shades their own. At the same time, an interest in color as synthesis. “I don’t want to see the colors in such a way that they foremost advertise their hue. Ideally, I want to mix colors to multiple — or indeterminate — valences, so that they’ll have multiple associations at once, and so I can experience them as pure feeling. To mix a color to that sweet spot between saturated and unsaturated or between one hue and another cultivates an ambiguity that activates my imagination.” But how would you do that technically, I urged.

“To get to these points, I often mix a color towards one lobe of the color wheel, then add another color that pushes it, back across zero, to the opposite lobe.”

“You are arriving to the end result by a meandering path,” I divined.

Jägel grinned. “It’s a good way to get unexpected results.” Among these results, the fruits of his collaboration with Alula Editions, a San Francisco–based collective rather like THE THING, except this one’s all about textiles only. 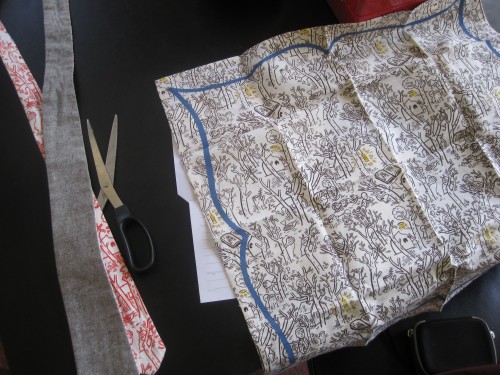 For Alula partners Helena Keeffe and Amber Cady, Jägel designed a bandanna and a necktie, with designs of swirling trees and wind. Look at the necktie, the loud pattern’s the lining, the front part’s as discreet as you want it to be. He looks up at the clock in the corner of his crowded studio. “Let’s go get some donuts.” 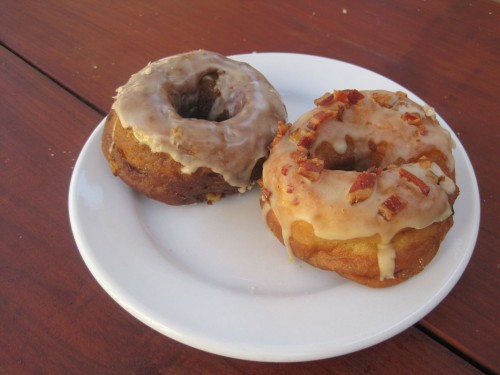 We walk a block or two in the heat towards 24th Street and the ineffable Dynamo Donuts, where I order their famous special Maple Bacon Apple. I forget what Jason gets, something with fewer calories, I can only suppose. Heaven! Then back to my car he walks me, and stops at a street corner, pointing to the sewer at our feet. “Ever see these?” 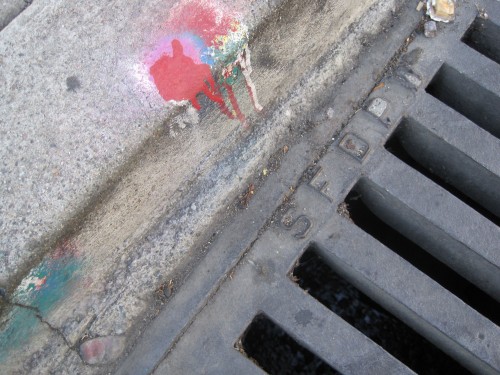 “Sure, plenty of times.” I’m confused, turns out I’m missing the point. He squats down and taps a finger on the side of the curb, where a splatter of sherbet colors lies unseen, like the buried Caesar of Omar Khayham. I had never seen anything like it before. “Guys come by to check the drains every now and then, make sure they’re in order, and then they leave a mark with some special spray paint. I saw one and asked him what he was doing.” This month’s color must be red — that special Margaret Kilgallen red — ironic! All the way home I’m stopping at every drain and you know what, reader? Those colors, like a corsage of overlapping flowers, appear on every drain corner, it’s like some lesson from Ralph Waldo Emerson about how heaven would be at our feet if only we really could look.

Jägel has a wildly entertaining and capacious book, Seventy-Three Funshine, published by Electric Works, about which I want to write elsewhere, but I’ll say no more about it here right now, except, it’s bigger than much of the furniture in my apartment, and, at $68, it’s the best bargain I know of right now. 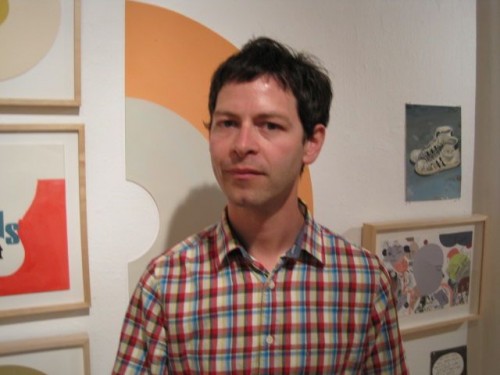