Our conversation was a sum of THIS presentation by Chris Coy

After our discussion we took a walk for PIZZA, returned to the studio and drew four drawings from memory after staring at these images on the Internet. You may recall an assignment I sent to artists in a recent post here on Open Space, Mr. Chris Coy inspired that action.

Brion Nuda Rosch: Staring at an image of Homer Simpson in a futuristic car for five minutes and then drawing Homer Simpson from memory minutes later proved to be a difficult task. The exercise proved some of our previous discussion concerning images we feel very accustomed to and familiar with, when in actually it seems impossible to recall many details with accuracy.

Chris Coy: A computer screen is very much a sequential image-viewing device. Which is significantly reshaping the function of the Image in my life. I have become a very adept surface skimmer – gliding my way across glossy roll over buttons, tumblr blogs and Google image searches and stock photo sites… which means hundreds, if not thousands of images pass before me on any given day. Imagery is being totally integrated into our vocabulary – I mean you can shoot, edit and upload video from an iPhone now. Even the core function of the phone is changing as technology facilitates this hypermediated kind of ubiquitous computing thing. This is cool but also dangerous since Looking can quickly replace Making if we aren’t careful. Those available hours become overtaken by reading/viewing all the things we’ve subscribed to in our rss feeds… and then another day is gone and we’ve barely kept our heads above the waters of culture. So…. to slow down the looking and do sort of computer still lifes of contemporary iconography like Homer Simpson or Pizza Hut logos is my own version of Cézanne’s Mont Sainte-Victoire or a K-Mart–ized vanitas. The best part about those drawings for me was the conceptualized framework that resulted in a sort of nervous laughter as we both drew the same image from memory and realized that our memories were failing us continually… and how we quickly replaced actualities with our own biased, generalized representations. Like: “Man, I know there was some sort of spoiler on Homer’s car, but I can’t remember what it looked like… ah well, I’ll just draw ‘spoiler‘ then- whatever that means.” It’s a sort of forced naïvete that brings back the challenge and the self-discovery that always makes art exciting. It’s a conceptual drawing restraint— so maybe the next step with these is to stare at the computer screen image and then hang from a climbing harness on the wall and do the drawing.

I recognize, however, that a “looking vs. making” dichotomy becomes muddied from an internet surfer performative approach…

BNR: We spoke of surfing as well, and for better purposes of our conversation I’ll refer to “surfing” as both riding waves and riding the Internet. Midway through our casual discussion, I was unclear as to which activity we were speaking of, both actions proved to translate within language in a similar manner. As someone who grew up in the Midwest, followed by a move to the East Coast during High School, I finally arrived in California in my mid-twenties. I remember the first time I drove into Los Angeles from Phoenix encapsulated by the sights I had found to be familiar from what I have seen on TV or in magazines. This was prior to the Internet, yet I had been affected by source imagery.

CC: Responded with these videos 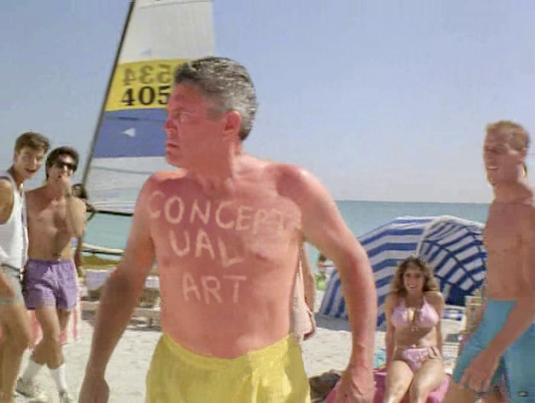 BNR: Shifting gears… Where do we go from here? How do images change when the original context is not understood. You gave a great example of a student taking an image you had used from Police Academy.

CC: We should bring Mr. Justin Kemp into this conversation- he was there with the whole Police Academy misreading image thing – Justin— are you out there???”

Justin Kemp: I was teaching an undergrad photo class last year and I had my students all participate in a class image blog. Since the course was just an intro to 35mm b/w darkroom, I wanted to try to do something that would allow the class to open up conversation about more contemporary visual culture (on top of some historical photo stuff too). The only rules they had were to post ten images each week (found or made) and be prepared to have something to say about any chosen image. A student put up Chris’ Police Academy image. I asked him to say a few things about the image; he told the class that it was a performance piece where the artist wrote on his chest with sunblock then sat in the sun until he was burnt. I think he or someone else in class made reference to Chris Burden’s work and how the physical body played a role…. yadda yadda yadda…. So for whatever reason the student saw the image, didn’t understand the context and then just made up a story to satisfy his understanding. Versions man… its all about versions… I never corrected the student, I didn’t really know where to start and I was interested in the whole situation. For all I know he is still telling the same story and my entire photo class has still never seen Police Academy.

BNR: The appropriation of this “artwork” (originally appropriated from Police Academy) was misinterpreted as an actual conceptual contemporary artwork, which to some account is correct, however the student in question was unaware of Police Academy, thus misreading your “work”. He places the character (Lieutenant Thaddeus Harris) in a context where he has performed a work of art, and a conceptual one at that! I feel approaching satisfying conclusions in our comprehension of art is common. Similar to a game of telephone, I am really interested in happenings or ephemeral situations where the life of the work is dependent on the stories which follow, and these stories shift their meaning from one conversation to the next.

CC: A good friend was recently telling me about his eccentric grandfather who was obsessed with pirates. The grandfather even buried treasure on an island off the coast of southern California, then traveled up and down the state tossing bottles with maps into the ocean. The hopelessly romantic notion of just setting something adrift like that correlates well (for me) with putting imagery online. It has the potential for everything and nothing at the same time. I know it’s not a direct comparison because you can track a lot of site traffic, incoming links, etc— but pinpointing the conversation and influence that truly emanates from one’s work seems kind of impossible. I’m amazed that my friend just happened to be teaching the class where the misinterpretation happened and could relate the story. It reinvigorates the work for me to know it is out there being misread – either by laziness or just ignorance…. or even intentionally– adding new layers of meaning.

CC: Chris: I like how this reads simultaneously overly-stuffy and then purposefully casual. Sort of stilted in its rhythm– spread out emails… successive sound bites. Disjointed. Awkward.

BNR: Yes, I am glad there is tension within the writing, nothing changed from email to email, all performed during different times of day, and in different moods.