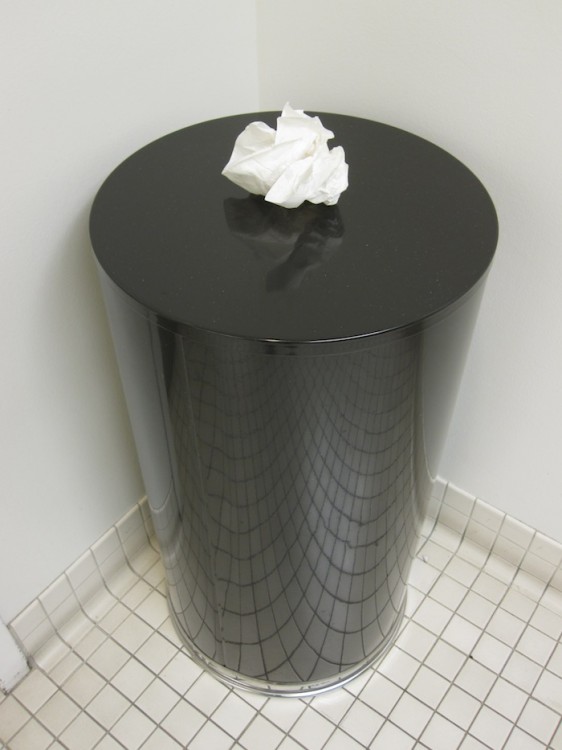 In spring 2009, after working on his feature film C RED BLUE J (screened at SFMOMA Fall election 2008), Chris Sollars returned to his playful street studio practice of intervention. Starting with performances of washing trash Street Clean 1997, kicking soccer balls through San Francisco in Cityscapes 2000 (collection Berkeley Art Museum), and sitting and walking as a Pile of Trash 2002 & 2006. Returning his attention to a sculpture practice and lack of space and materials, Sollars started taking walks and making public sculptures with trash and debris on streets of his San Francisco Mission neighborhood, taking a photo, and leaving them.

This summer I invited Sollars to use SFMOMA as a site for art-making. As a parameter the artist used only materials on hand in the museum itself, from paper products, posters, bottles, debris left behind, to the shirt off his back. At no point was his project made official to the staff of the museum, similar to working in his neighborhood, Sollars came and went and made pieces while integrating himself as an everyday museum guest. The images posted within this post are his results. 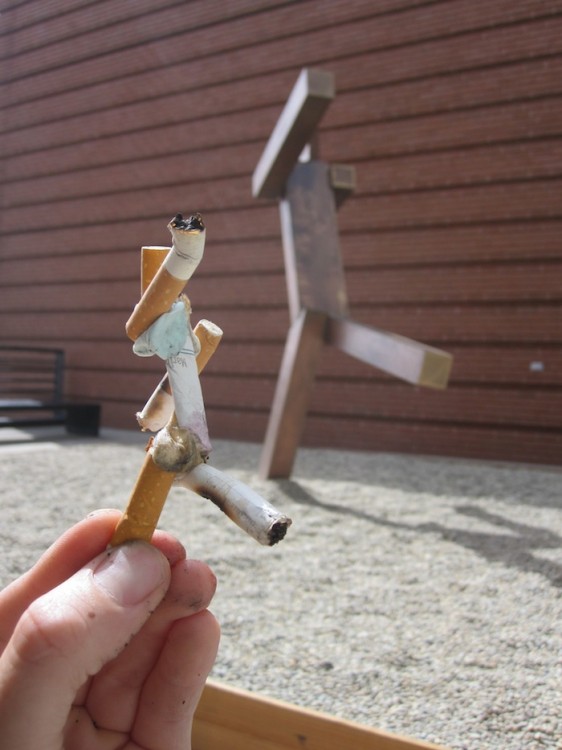 In November 2009, we collaborated on a series of sculptures used in our Arthur Allan exhibit at his space 667Shotwell.  As a part of this process I invited the artist over to Hallway Projects for a One-Day Artist Residency in which he reacted to my domestic gallery space, through hiding around the apartment in a series of short video still life’s; Behind, Beside, Inside 2009. These still life’s of the Hallway Projects apartment would slowly reveal Sollars hiding behind a chair, beside a couch, or inside the fridge were then re-projected at 667. 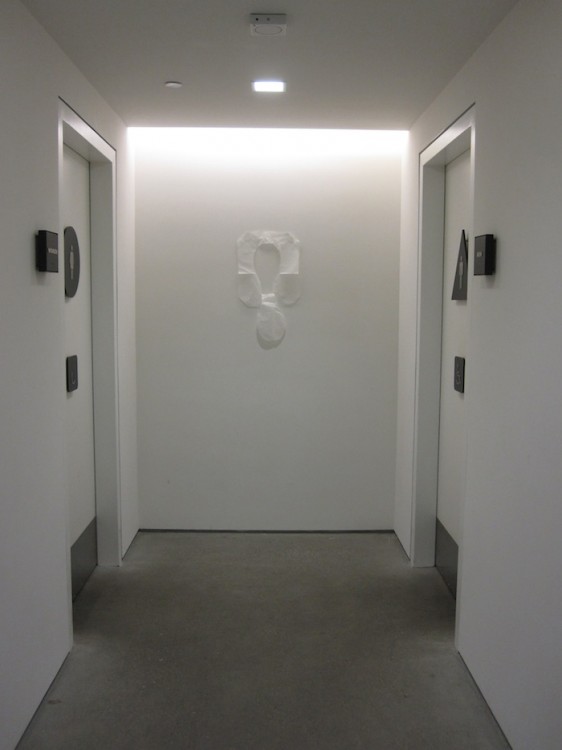 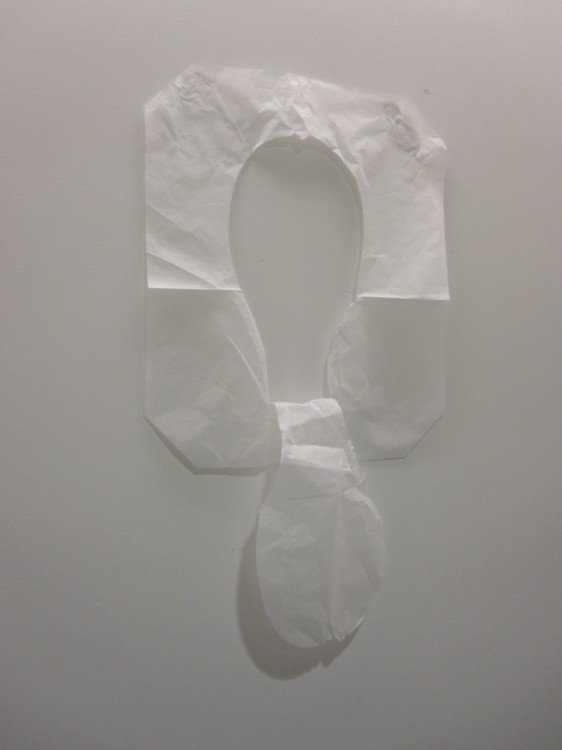 In January artist and curator Abner Nolan invited Sollars to A NEW MUSEUM on 24th Street in the Mission create series of sculpture window displays for 2929 Double Take; using ready-made-trash and debris of the neighborhood and pegboard backroom of the storefront as a studio for sculptures that were rotated into the windows over the course of the two weeks. 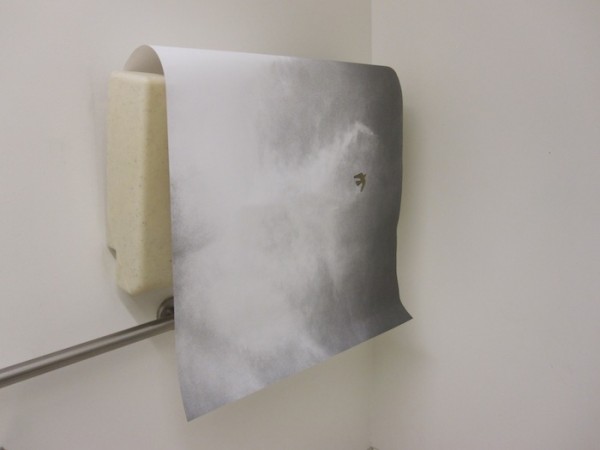 During Art Fair week in NYC, unable to resist, Sollars showed me a series of works titled Small Fires made during a late night session within the Independent art fair installations at the former DIA in Chelsea. Further confusing the Independent’s lack of traditional gallery booths, Sollars made successful works while complementing the “Unmonumental” tendencies of scheduled and planned fair participants. 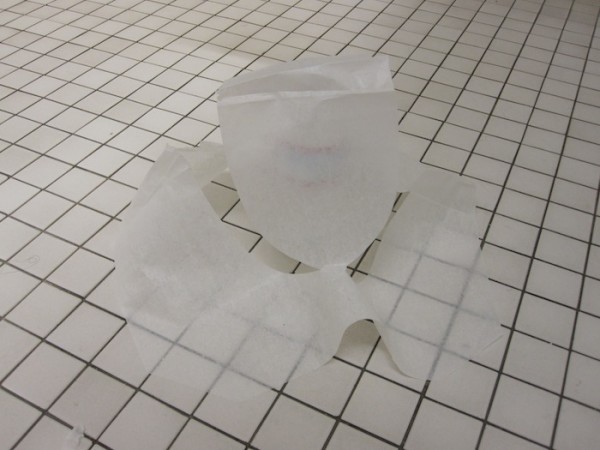 He relates this urge to intervene, to when he was 10 in 1986 walking through his father’s Indianapolis IBM office, and after finding a Hey Verne its Ernest mask in a cubicle decided to find the highest office and place it on his desk. After sharing this accomplishment with his father, Chris had to write an apology letter that his father hand delivered the following Monday. 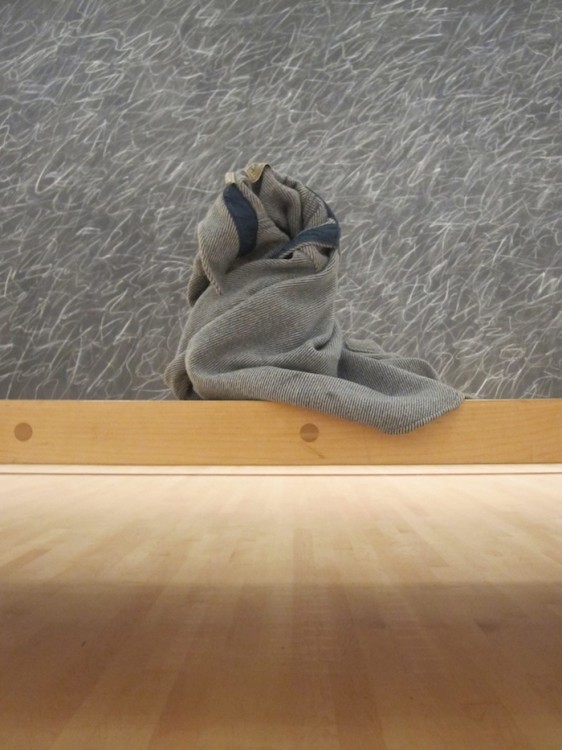 Most recently continuing this reaction to different environments Sollars opened a solo exhibition of sculptures, photographs, and videos installed in and around the apartment gallery Glitter Box Oakland, run by artist and curator Ian Colon. At Glitterbox, Sollars mined Ian’s collection of works, objects, and archive into an exhibition that creates portrait of the artist, the owner and his space. 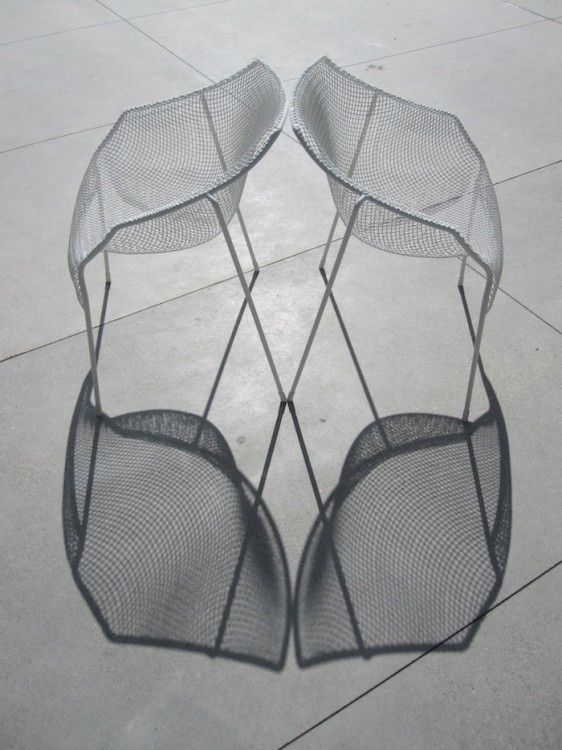 ATTENTION
Later in the month we will announce a release of 3 bags with a selection of works made by Chris Sollars during this unauthorized SFMOMA residency. This transaction will allow someone to have a SFMOMA collection of works in their home. The date, time, and conditions for this exchange will be announced soon. So check back here on Open Space, and we suggest you become a fan of SFMOMA on facebook.