Five questions to SFMOMA artists, staff, or guests.  Today I spoke with Stella Lochman, the education and public programs assistant at SFMOMA. For those of you who’ve attended any public program in the past year, you’ve probably seen her, walkie-talkie in hand, making it happen. She is also a  San Franciscan, born and raised. 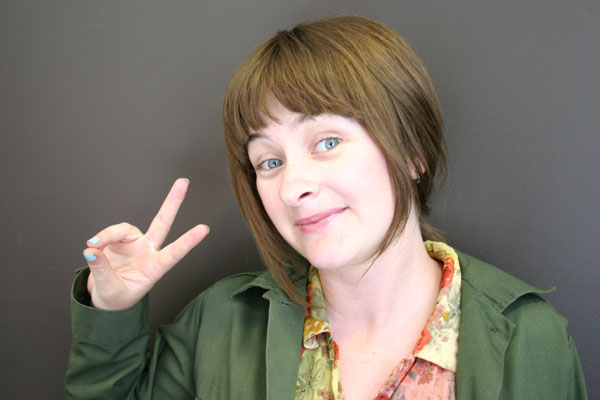 Stella Lochman in the SFMOMA offices

If I was the one stealing it, I would like to organize a pretty big heist surrounding the whole situation so I probably would want to steal something really hard, assuming that I’d get away with it. I would want to steal something really difficult to steal, so probably the Mona Lisa or the Hope Diamond. If the point of the question is to steal, that’s the answer, if it’s what I would like in my house to look at every day, I think it would be this André Kertész photograph of Magda Förstner, a dancer and cabaret performer. She’s lying on a couch and she’s got her legs up in the air and she’s very strangely contorted and it’s totally bizarre and it’s my favorite photograph ever. I love it. And I want it in my house one day. I hope I don’t have to steal it, and can just afford a print someday.

I make a lot of playlists that are specific to dates and times, so I’ll make a “Fall Playlist” and try and get music that reminds me of fall on it. So right now I have my “Summer Playlist” which is a lot of the Best Coast, and sort of garage rock – sunny, happy, Bosonova music on there. Anything that reminds me of the beach and summertime. And surfers.

Other than your phone, keys, and wallet, is there something that you always carry with you?

I carry a very large bag, and so I carry a lot of stuff with me all the time. I always have my wine key on me, because you never know when you’re going to need to open a bottle of wine. I always have a pen and a piece of paper, because I ride the bus a lot and sometimes things come up in your mind, and you’re like oh I have to write that down! I always have my iPod with me because I have to put those summer playlists to use.

That’s a hard one. I mean, I really like the internet. A lot. I know that there’s this whole back to crafts, hands-on thing that could be the answer, but I’m on the internet all the time. I really like using Twitter, Facebook, and all of the social networking devices that are out there. I have a very large blog roller, like a Google reader blog roll, where I read about 35 blogs a day. I go home and get all of my information aggregated into the same place. So anything that aggregates information, I’m a big fan of.

What should I have asked you?

I always like to tell the story of my neighborhood before it became what it is today, because I grew up by the ballpark, and everyone thinks of it today as the sort of dot com center of the universe, but what I remember it as is, where the Safeway is was a trailer park and the ballpark was sort of these strange artists residencies that were sort of shady and weird and you never really saw anyone go in and out of them. And  there was a gay club where a lot of the dot com offices are now that would leave really lewd fliers on our windshield and the methadone clinic was next door, so in ten short years the neighborhood has completely come around. It’s nice to walk around a part of town and know what used to be there. Which is why I love Rebecca Solnit’s project.