One on One: Frank Smigiel on David Hockney 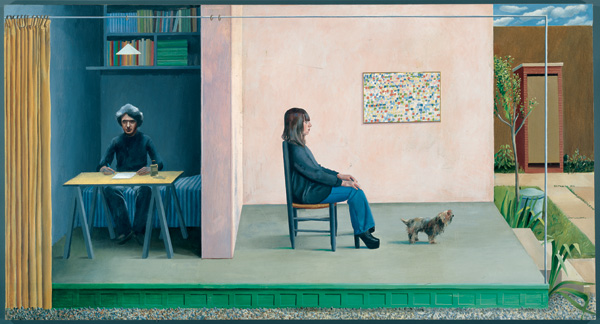 Earlier this month, I had the pleasure of giving a gallery talk on David Hockney’s double portrait, Shirley Goldfarb & Gregory Masurovsky, currently on view in From Warhol to Calder: Introducing the Fisher Collection. I approached the talk as the Hockney fan that I am, not the Hockney scholar that I am not, so I have the fan’s boosterism and intense defensiveness, ever eager to protect my beloved artist from any unfair critical scrutiny (and of course in the fan’s mind, any critical scrutiny is at first take unfair). I’m also pretty sure my research notes were scribbled down and then lost.

Hockney can take a critical beating, not unlike his American opposite Andy Warhol, with critics unsure of each artist’s interest in glamour, pop circulation, and the beauty of people-as-image. Surprised at Hockney’s inclusion in the 2004 Whitney Biennial, where I worked at the time, thrilled at this inclusion, Jan Tumlir wondered in Flash Art how “the kids” today had lost the “former perception of Hockney as an ultra-reactionary, fawning court painter to the emerging global aristocracy of stardom.”

Hockney is of course the sunny LA to Warhol’s midnight silver NYC, the “big splash” in the pool over the freaks in the Factory (surprise from those lost research notes: Hockney’s iconic painting A Bigger Splash was painted in Berkeley! The local fan thrills at the thought.). In 1963 he burst on the scene right out of art school, completely selling out his first London gallery show, “Pictures with People In.”  He’ll meet Warhol and Dennis Hopper that same year, and then begin his romance with Los Angeles in 1964.

From a base in LA he’ll bounce around Beirut, Morocco, Italy, London, the south of France, Corsica, Nice, and St. Tropez, with some far-flung travel to Japan and the far East, before winding up in Paris, in the winter of 1974, where he would begin to paint the Goldfarb and Masurovsky piece. To my eyes, Paris has never looked so like Santa Monica—though guests at my talk suggested many other LA-based locales. Call it Hockney’s “Californification” of everyday, even Parisian life.

In the fall of that year, Jack Hazan’s “fictional documentary,” A Bigger Splash, is released, and this film, with its depiction of Hockney’s glamorous & uninhibited gay life, would seal the image of Hockney as the frivolous dandy with famous friends & lovers. We’ll screen this film in the Phyllis Wattis Theater this Thursday night, and it’s truly not to be missed. ( The amazingly overwrought trailer is here.)

What Tumlir doesn’t write about—a lá critics of Warhol like Robert Hughes, who wrote basically the same critique in the late 1970s of that American Master—is the queer dynamic of each artist. While in the 60s and 70s, Warhol’s contribution to a queer aesthetic was primarily through film, Hockney’s was through painting—and, as Edmund White suggests, via the intimacy of domestic scenes. And the intimacy is one of the friend or the lover—not the voyeur for a straight audience.

A double portrait painting like that of Shirley & Gregory is presaged by many same-sex couples, including the 1963 Domestic Scene, Notting Hill, where a naked man, left looks towards a seated and clothed man, right, who, like Shirley here, stares forward, not countenancing the lover behind him. But even in more tender double portraits, including those of 1968, like Christopher Isherwood and Don Bachardy, where the former lover gazes longingly—perhaps even a little protectively—on another, we still have a fundamental isolation, like American Collectors (Fred & Marcia Weissman) of the same year. Fred stares to the right of the picture plane, while Marcia looks directly at us, provocatively. They might as well be actors in a symbolist play, or Last Year at Marienbad. There is no connection.

I do not want to suggest that Hockney’s heterosexual couples are doomed while his gay lovers are blessed. Far from it. The Hazan film Thursday depicts Hockney’s creative process after the break-up of his relationship with Peter Schlesinger, and it tracks how this failed relationship impacted the cultural circle which made Hockney who he was and is.

What interests me so much about this painting of Shirley & Gregory is its suggestion of artistic community, artistic ambition, and the vagaries of fame Hockney rode so well. While Warhol’s and Hockney’s circles intersected, and crossed often with the famous, each had an interest in their own communities of friends and lovers who had no access to, well, anything. Warhol supported his everyday drag queen, addicts, and tranny “Superstars” into stars (and after our screening of Chelsea Girls two weeks back, one might question why: all that screaming!); Hockney had his muses, his fashion designers, and friends like Shirley and Gregory.

It’s interesting to read this painting against the encounter that produced it. What did these American expats think of this uber-famous exemplar of London’s swinging 60s art scene? And in 1974, when that scene was gone? Gregory went to Black Mountain College at 17 in 1947, at the suggestion of his older brother. Born in the Bronx, in a predominantly African-American community, he would go on to a long career in black and white, a draughtsman in the collection of MOMA NYC, a book artist, who died in 2009.

He and Shirley married in 1954. She had fled Altoona, PA, for NYC that same year, and she would later recount, in journals she kept in Paris (where the couple ran to that same year, thanks to Gregory’s GI Bill) that while Altoona gave her her genes, she would give herself everything else—from high fashion platforms to Rudy Gehrnreich bikinis. “My skin was given to me in Altoona, Pennsylvania,” she wrote. “The next best thing I can do is choose and select and pick everything else possible and impossible, for the rest of my life.”

Shirley was a flanuer, walking the streets of Paris, and enjoying time in famous cafes. Some reports suggest that she moved among expats like Joan Mitchell and French artists like Yves Klein, but an interesting radio show, adapted from her journals, suggests otherwise: “I am Shirley Nobody. I am my own event,” she wrote.

What did Shirley think of David Hockney’s superstar arrival and painting, when she had exited the art world? “I flipped, departed, walked away from the art world without going away. It was my own act done by my own hand,” she attests. “That part of me committed suicide, leaving me free to be what I am today. If I paint now for me and perhaps for Gregory, it is basically a necessity for myself, enacted by my own hand.”

You can see Shirley’s dot-like paintings in this Hockney picture, paintings made by applying a palette knife “gently” to the canvas. As she noted, “once upon a time there were dots, splashes, and slashes.” She thought about Rothko slitting his wrists. And she struggled with ovarian cancer in the late 1970s, only to lose that fight in 1980. Her last painting was all black, like her well-commented-on, and well-thought-out, fashionable look.

As the Hockney fan, what I love is the very personal world depicted in his works—a world that the fan seeks out. And so my search for Shirley Goldfarb. Warhol is glacial, unremitting, and unforgiving—that is his power. Hockney is familial, intimate, and warm. If “kids” today, including me, look to him for the possibilities of painting, it is because his works depict and open up personality. They suggest the lived world of lovers and friends. And they introduce us to folks like Gregory Masurovsky and Shirley Goldfarb, folks we should have known as well—even if Shirley’s solitary walks and café sojourns said “No.” No one in a Hockney is a “nobody,” because such a category, as he reminds us, does not exist. A lá Shirley Goldfarb, we are each our own event.

Frank Smigiel is SFMOMA associate curator of public programs and the creative and driving force behind our stellar LiveArt series. Shirley Goldfarb & Gregory Masurovsky is on view on the fourth floor until September 19. Fantastic, so do come down and see it if you can.