We’re breaking a pattern here on the blog and writing—directly and unabashedly (ok, maybe more directly and unabashedly than usual)—about one of our own projects. We recently finished designing, fabricating and installing a miniature park, in the parking lane of 22nd Street at Bartlett in the Mission District. The site for this “parklet” was carved out of the regulatory structure by the City of San Francisco itself through its Pavement to Parks program, which looks to underutilitized and surplus areas of asphalt in the city as sites for potential reprogramming of and experimentation on the urban landscape. By casting these projects as temporary experiments, the program opens up a deceptively simple alternative path to citymaking: a series of spatial improvisations, given permission to be both graceful or clumsy, but which may suggest a few ideas we want to keep. In contrast to our more familiar American modes of technocratically driven, convulsive public process, this notion is more akin to the artist’s practice of sketching until right form emerges. Projects are deemed temporary until the public has had six to twelve months to try them out, at which point removal, corrections or permanent improvements can be made. 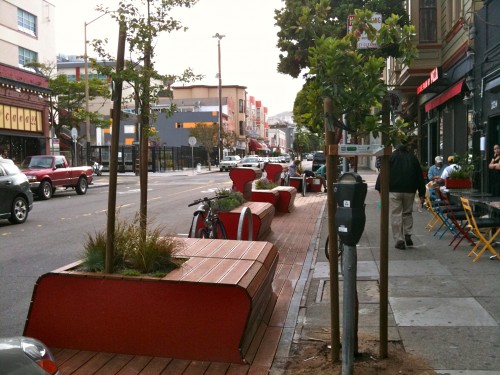 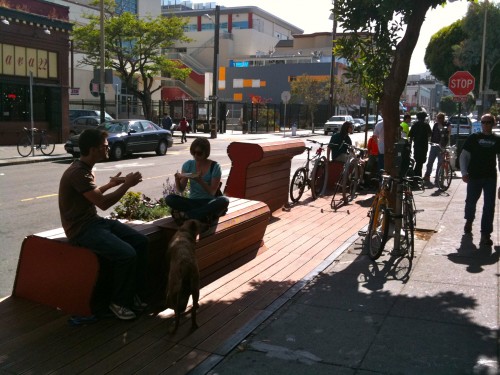 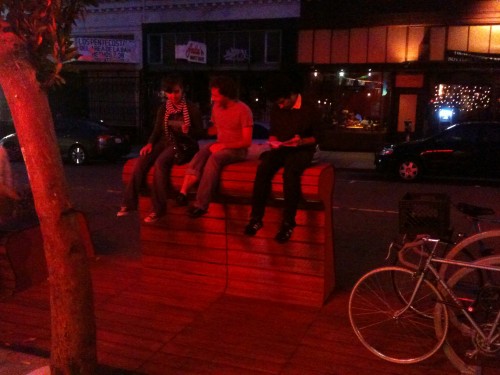 Our notion for the park was that it be assembled of a series of blocks, each of which served a unique programmatic function. This modular system could be arranged a number of ways depending on the site conditions, and if experimentation revealed news about human occupation of the site over time, the design could respond through re-arrangement of its parts. The blocks turned out to be three feet wide by seven feet long, made of steel and bamboo decking. Some were seats, some were tables. Some were left “blank”, in fact it might have been good to leave even more blank. We tried to make the blocks sinuous, like the surface of a carpet that has been wrinkled in different ways. And yes, they do kind of look like those benches outside the De Young, don’t they? We like those benches.

We’re working on a second version of the system for more widespread use as city permitting opens up new sites. It is interesting to be designing a large product, made to be comfortable and expressive, specifically for the parking lane, that isn’t a vehicle. Until now, cars have held fief over this territory because they express a level of mass, craft and capital that entitles them to it, at least psychologically. A car is a body, a breathing, purring thing that can both cradle and conquer. It sits, plump with importance, wherever it is left. It cannot be moved, except by a larger vehicle. Arguably, it takes a bit to compete with that. Experiments in displacing cars with human bodies and quickly improvised spaces have been promising, but can feel provisional. If design is an agent of programmatic change, setting in motion an evolutionary course, then let us find a new, energetic joy and generosity for urban spaces and use design to express it. It is that same ecstasy that gave us fins and chrome fifty years ago. Let us continue to play with art and design in our streets, as we always have, but recognize the agency of that design: it creates our priorities as much as it is created by them.

I’m turning to Alex Wall, who writes that “this is less design as passive ameliorant and more as active accelerant, staging and setting up new conditions for uncertain futures.” How will people use temporary parks? We don’t know. Will they change expectations of the street? The social life of the street seems to have already inhabited these new spaces, unselfconsciously. The future is uncertain since as we embark on a major reprogramming of the urban surface, perhaps the biggest since we last reprogrammed it in mid-last-century and set in motion an open-ended evolution around the automobile. We greet this task with an emphatic YES and a hunger for the myriad new forms it will take.