The BUCKY Cycle plays this Thurs @7p.m. on a program including other film and video works by Nancy Holt, Robert Smithson, Reece Camp Carter, and Robert Morris in SFMOMA’s Phyllis Wattis Theater. 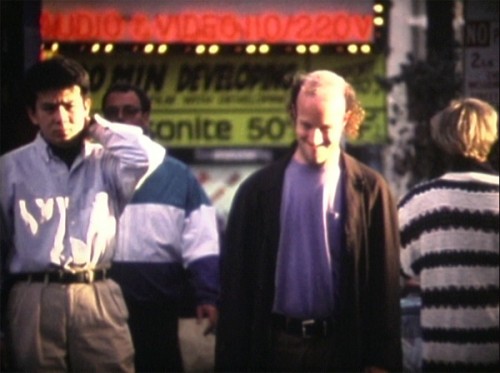 Surely every San Franciscan’s been there a hundred thousand or so times. You’ve stepped out of your apartment, walked a pace or two to the bus stop, a blank expression plastered firmly to your visage. Don’t look left, don’t look right, you think. One’s toes are the best place to rest one’s eyes… Then, out of simple childlike curiosity, you take a surreptitious glimpse at some point in your surroundings. MADNESS intrudes… Since Ronald Reagan dumped the mentally ill on our streets in the early 80’s, America’s most beautiful and temperate city has run RIOT! There are advantages to the situation – San Francisco, if properly appreciated, is an endless carnival. But for those who’ve ever experienced the slightest “mental strain”, this parade is an open invitation for the excitement of inner demons. You observe the madness… Suddenly, you feel it — you ARE the madness! How do we do it?!!, you think. The sirens! The horns! The streaming hoards avoiding the sight of those pissing and shitting in the streets! Then you reorient yourself — ah, of course! San Francisco’s one GIANT COMEDY, for me, and ME ALONE to enjoy… 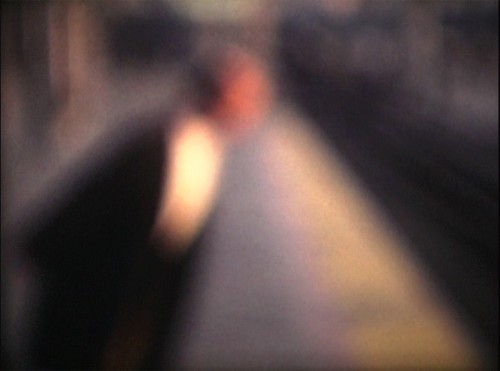 Not too long after I met Paul Clipson fifteen years ago, he embarked on a collaborative project with his friend, guerrilla performance artist Adam Heavenrich. Adam was shortly to move to Israel, and the two began a fevered quest to shoot as much silent improvisatory Super-8 footage as possible before the opportunity vanished. Money and time were tight. Adam could only afford a stray hour now and again away from work. Super-8 Kodachrome cartridges put a hefty dent in Paul’s grocery budget. But the two had thought, and talked, and japed together for years, and all this had simmered long hours to come together in a delicate yet hearty, robust yet microcosmic potential stew… By the time Adam stepped on his plane, a half-hour-or-so of Kodachrome had been sent in for processing. The prima materia was captured, ready to be developed into gold. Over the next five years, at an average of 1 and 2/3’s-or-so per year, eight (including the not technically BUCKY, but definitely related piece, THE LAST SUPPER) Super-8 transferred to, and edited on video works trickled out at just the right pace to keep this cycle’s 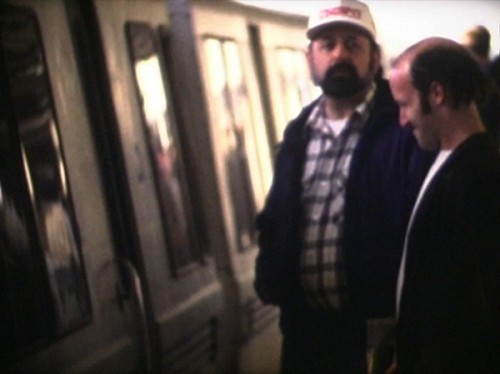 followers on the hook as “in a big way” fans. All works of the cycle lasted a full two minutes. One hundred and twenty seconds proved the perfect span for BUCKY, an erstwhile everyman who attempts to deal with the all-consuming Big City Madness by embracing and parodying it, to soar without hypnotizing his audience into a full-on “I’m ready for my straight-jacket, Mr. DeMille!” state. BUCKY faces the camera. The intrepid viewer realizes he or she has been signed up to document BUCKY’s least little move. Every gesture is pantomime, vaudeville, Kabuki — for Himself!! San Francisco streets are treats when you realize YOU are the CENTER of the STORM!!! BART trains are endless delights, like fish in the sea or masseuses in the Tenderloin — so many to choose from!! BUCKY is the one to be, ’cause BUCKY always wins! Like the fog, like David Carradine in Kung Fu, BUCKY drifts with the tides, plays possum as needed, and always triumphs! Those seeking success by poring over tomes of advice and self-improvement would much better invest their time in BUCKYS… Besides, wouldn’t you be better off with a life choreographed to Chopin and Dimitri Tiomkin? 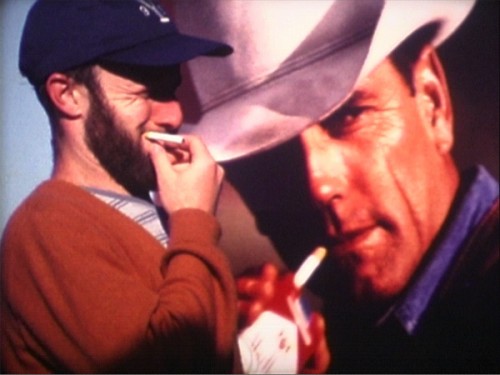 Without a doubt, I’m a BUCKY partisan. To see bits of Jacques Tati, Jerry Lewis, Buster Keaton, Beckett, etc, filter down into a dead-pan melange as photographed by Keaton in collaboration with the Lumiere Bros, into little Super-8 trailers for movies that couldn’t possibly be as good as the two-minute pictures we were currently viewing was a heady experience. (I’m informed on the highest authority that Wittgenstein was yet another guiding influence — big surprise!) It’s not often one encounters works of epic genius that are designed to fit on the head of a pin. Those familiar with Clipson only through his fantastically prolific output in the genre of Super-8 experimental epic lyricism over the last six years will be forgiven for wondering how he could spend five years on eight films largely edited-in-camera with a total running time of only sixteen minutes! To see BUCKYS will illumine all… 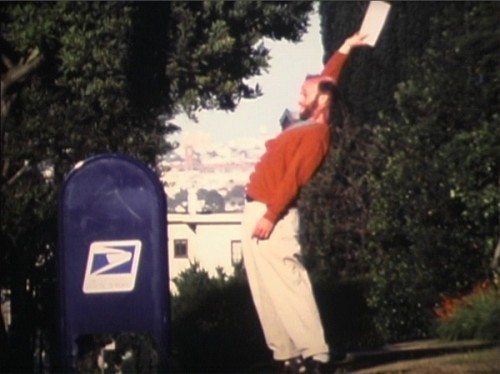 Adam Heavenrich as the title character in BUCKY 4 (1998)

Assiduous Open Space readers will know I got a little beside myself upon coming to work last Thursday to find Paul hard at work editing the originals of the first two BUCKYS, to be shown for the first time in their true Super-8 form. By this Thursday evening, he will have performed this feat upon the entire corpus, and all of his BUCKYS will be projected from the center of the Wattis Theater by the film artist himself. This event will combine elements of gallery exhibition (in that the film passing through the projector will be the PRECIOUS and ONLY film to have passed its way through the camera to find itself BUCKY), and performance, with a seasoned and celebrated celluloid hero at the helm of his projection instrument. Those familiar with his collaborations with Tarantel, and other musical figures, are likely to be astonished at another cinematic realm previously essayed by Clipson. One can only wonder how many other filmic terrains will be found in this pocket maestro’s future, just past current view, on a not-so-distant horizon… 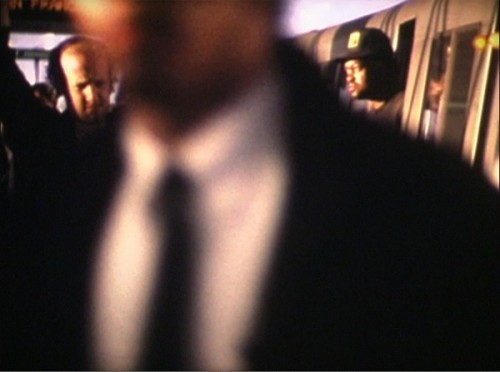