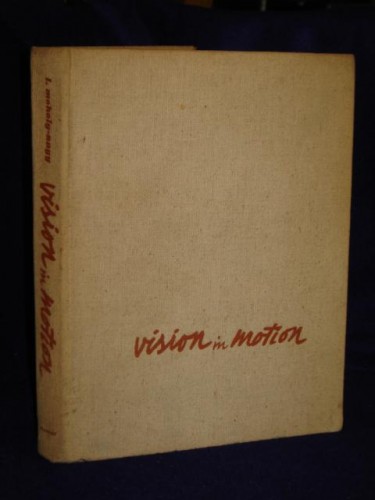 Curious to see exactly what Moholy-Nagy was feeding my noncritical, unsophisticated high school self in late 60s Hammond, Indiana, I find my copy of Vision and Motion, which Kevin gave to me for my birthday ten or so years ago. It’s a coffee table-sized book, 372 pages, an inch and a quarter thick, its cover a textured lineny beige (“wheat-colored buckram,” according to used book dealers), “vision in motion” in brown script on the front and spine. The illustrations, which are interspersed throughout, are amazing—all those sleek lines and kinetic layerings, it’s like stepping into a time warp of modernity, like when I watch a 1930s Flash Gordon serial, and I feel nostalgia for a future that never happened (except perhaps in a Design Within Reach catalogue).

Sample pages from Vision in Motion

From Moholy-Nagy’s text I’m expecting laughable, hokey, anachronistic, cerebral formalism. Instead I find a passionate, intelligent critique of the devastating effects of unchecked industrial expansion and its “blind dynamics of competition and profit,” which Moholy-Nagy blames both for global conflict and personal angst. “The social and economic chaos of the world and the intellectual, emotional, and spiritual misery of the individual are appalling.” Rather than arguing against capitalism, Vision in Motion presents a blueprint for how to survive it, how to make technology a benefit instead of a curse. Of course this touches home—for isn’t that a core question for all of us, wealthy or poor—how are we surviving capitalism? Or perhaps more precisely, are we surviving it at all? Is our surplus consumption of images as well as products killing our spirits? For Moholy-Nagy, who calls art a “biological necessity,” a meaningful life is no mere luxury. He believed art should be integrated into life, not held separate from it, and that industrial design has the power to “translate Utopia into action.”

Moholy-Nagy argues for the education of the emotions as well as the intellect:

The promise of a new society built upon emotional literacy begins with the sincerity of the amateur rather than the professionalism of the specialist, for the amateur “is an authentic testimonial of the manifold abilities of the human being to act and react purposefully if emotionally stimulated.” Rather than eradicating the amateur’s unadulterated impulses, educators should protect and shape them. Moholy-Nagy also valued children and psychotics for their “primordial aliveness.” I think back to the night we drove home from the folk concert, passing the oil refinery—but this time Moholy-Nagy is driving the Karmann Ghia. My teenage self takes in the refinery’s apocalyptic splendor and exclaims, “It’s pretty.” Moholy-Nagy delights in my childlike glee. He takes my hand and gently says, “You’re right, Dodie, it is pretty, and let’s look at it from another angle . . .”

Vision in Motion is Moholy-Nagy’s swan song. As he wrote it, the world was reeling from the ravages of WWII. He was diagnosed with leukemia in fall 1945, and died in November, 1946. The book appeared posthumously in 1947. According to art historian Krisztina Passuth, Vision in Motion traces a change in Moholy-Nagy’s views on formalism. “This sensitivity to the traumas of the human soul is new to Moholy-Nagy; earlier, it was only rationalism and creativity free from emotion that he appreciated.” (Krisztina Passuth, Moholy-Nagy, New York: Thames and Hudson, 1985.) The spectre of mortality adds urgency to Moholy-Nagy’s utopian vision. He’s pained by Hitler’s attack on culture as well as bodies. Hitler “propagandized trash” and “tried to destroy modern art, science, and philosophy” because he “sensed that the content of art is basically not different from the content of our other utterances. The only difference is that art is produced mainly by subconscious organization of the means implicit in the cultural and social setting of the period.” Since artists intuit and express “spiritual trends,” according to Moholy-Nagy all art is ideological:

The true artist is the grindstone of the senses; he sharpens eyes, mind, and feeling; he interprets ideas and concepts through his own media. In the midst of vast social controversies he cannot escape that task. He has to take sides and proclaim his stand; indeed the artist has a formative ideological function, otherwise his work would be only an exercise of skill in composition.

The artist can choose to work in conventional forms that reaffirm the “obsolete philosophy of a decaying status-quo,” or the artist can work in avant-garde forms that point to the future, that can usher in a new world. In a sidebar, Moholy-Nagy quotes from T.S. Eliot’s Four Quartets: 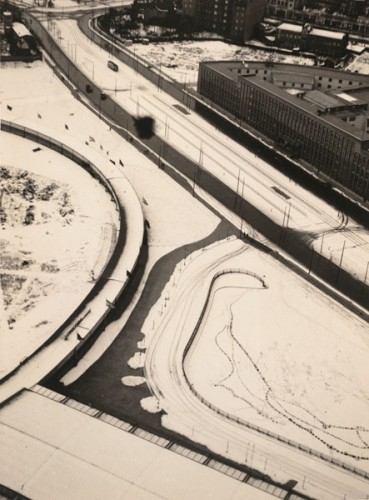 When I learn from Dominic Willsdon, SFMOMA’s curator of education and public programs, that the museum has a Moholy-Nagy photograph, Vom Funkturm (From the Radio Tower), on display, I make a pilgrimage to it. The photograph is hard to find, hanging on a wall of similarly mounted black and white photos, lined in close proximity. It underwhelms me. It looks like a snow covered corporate park, I think. What’s the big deal? Yet Dominic had spoken so excitedly and knowledgeably about it. At home I continue to study a jpeg of Vom Funkturm. Its geometric forms and fluid lines remind me of motion studies in Vision in Motion. 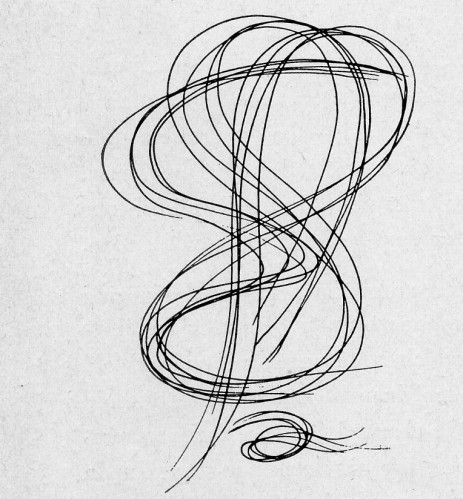 The more I stare at the image, the more I notice a tension—between motion and stillness, between curved landscape and diagonal slashes of road. Its Berlin landscape feels both desolate and peaceful. The photographer is far above it all, looking down. The 492 foot tall radio tower from which the photo is shot opened in 1926. The radio tower hails a futurity that must have appealed to Moholy-Nagy. In 1933—four years after Moholy-Nagy photographed Vom Funkturm—the square and the station below it were renamed Adolf-Hitler-Platz. Hitler kept an apartment nearby. Here’s a joke about the radio tower from World War II:

Hitler and Göring are standing on top of Berlin’s radio tower. Hitler says he wants to do something to cheer up the people of Berlin. “Why don’t you just jump?” suggests Göring.

When Berlin munitions worker Marianne Elise K. told this joke at work, a coworker reported her to the authorities, which led to her being executed in 1944 for undermining the war effort “through spiteful remarks.” Looking back at Moholy-Nagy’s Vom Funkturm through the lens of history, the snow-covered terrain looks fragile, a metaphor for innocence endangered. I stop by SFMOMA to take another look at it, but the photo is no longer on view. Vom Funkturm enters my life in all its silvery materiality then—blink—it’s remembrance, one image among the countless images that comprise our histories, our lives—blink—here comes another image—blink—another—nothing can stop the onrush of vision in motion.

Moholy-Nagy at his desk, Institute of Design, Chicago, c. 1945, photograph by Frank Sokolik.