Five questions to SFMOMA artists, staff, or guests.  Sasha Wizansky lives in San Francisco and is editor-in-chief and art director of Meatpaper magazine.  Meatpaper, launched in 2007,  is the world’s only quarterly print magazine about the culture of meat.  For our new Now Playing Thursday evenings Meatpaper has been collaborating with Blue Bottle to do a series of food-themed events in the SFMOMA Rooftop café. In March we had an evening of charcuterie and coffee, and the April menu was Vertigo inspired.  Please join us for the June 17th Now Playing! Sasha is planning a floral-based menu. Yum! 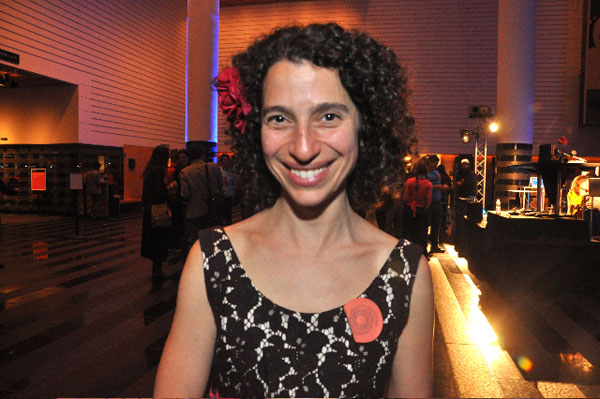 Mustaches, like mustache on a stick, I have a number of those. Fake flowers. Plastic ponies. I also collect aluminum coffee pots. I’m trying to cut down on my collections because my instinct is to keep things and then I have too many things. I think I have a minimalist and a maximalist in me at once.

Right now I’d like to have David Byrne to dinner. I’ve never met him and he’s somebody I think of as an artist who has kept his brain and creativity elastic, and over the years he’s been involved in so many different kinds of projects in both music and visual art. Now he’s on the road as a bicycle activist.  For many years I have been inspired by his creative output and his ability to stay engaged, curious and deeply creative. It would be a dream of mine to have dinner with David Byrne. I would be nervous to cook for him but I would make a series of Vietnamese dishes because that’s my favorite food to cook. I would cook a clay pot fish with scallions and green papaya salad. And maybe fresh rolls.

I think it would be amazing to live near Yayoi Kusama’s installation, Infinity Room – Fireflies on the Water which I saw at the Whitney Biennial a number of years ago. It’s a mirrored room full of hundreds of colored lights and I remember standing on a little dock and being surrounded by a feeling of infinite space and possibility. It made me laugh that that expansive feeling could be created with just lights and mirrors. I would like to have some people over for dinner, and then after dinner lead them to a secret door, and let each in turn spend a few minutes inside the Infinity Room before dessert.

I would also like to live with one of Toba Khedoori‘s large-scale drawings of windows or chairs. Her use of negative space elicits a dream state; you can project yourself into all that air.

I listen to a lot of music and I think I have fairly eclectic taste. I usually have an album du jour. Almost every issue of Meatpaper has a theme album that I play over and over again while I finish it. I’m not only the art director, I also do all the design so every page of Meatpaper goes through my computer. Toward the end of each production cycle I’m usually listening to music incessantly. Recently I’ve been listening to Fever Ray and Beach House. The band Tanlines played a big part in issue 11, at print now. I usually have a beverage and an album for every production cycle. For issue 11 I would say it was French press coffee with neighborhood honey. Issue 10 was kombucha and The Books.

Maybe you should have asked me how I feel about the SFMOMA roof. That’s my main engagement with SFMOMA recently. I think it’s one of the most special places in San Francisco. I love that it’s a new view of the city and at the moment it feels like a very classy, airy oasis in the middle of downtown. I’ve been very happy to be able to spend some time up there. It’s kind of like when you dream that there’s a new room in your house. Like dreaming there’s a new vista and a new vantage point to see the city.

You can see Sasha and Meatpaper on June 17th at the Now Playing event.  Floral-based dishes begin being served at 6pm in the SFMOMA Rooftop Garden. At 7pm Chris Johanson’s home movies screen in the Wattis Theater and at 9pm Chris leads Mission super-group The 17th & Capps in the Atrium.  All is free with half-priced Thursday evening admission.