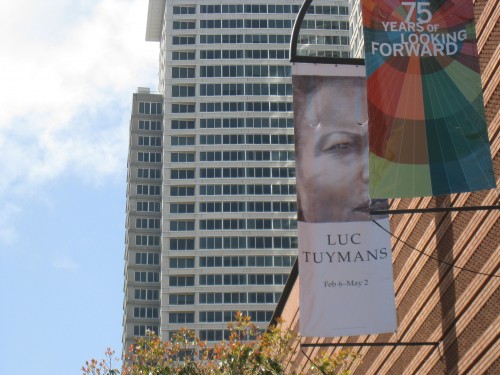 I’ve taken so long to write this post about the Luc Tuymans show that the show closed before I could finish. The longer I spent, the more I realized that it wasn’t really Tuymans’ paintings I was most interested in, or concerned about. What was really bugging me was the hyperbole of exhibitions, the engineering of careers, and what museums have decided they must do to sell art, and artists, to their publics. 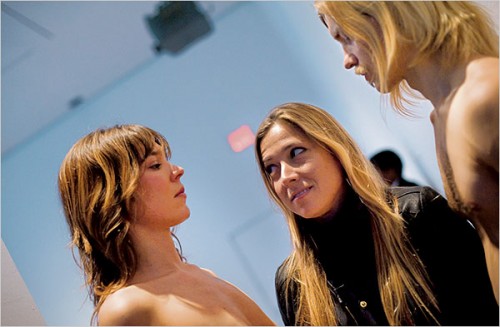 “Marina Abramovic: The Artist Is Present”: A visitor at MoMA walks between Jacqueline Lounsbury, left, and Layard Thompson, both naked in a doorway. photo credit: Joshua Bright for The New York Times

Dodie Bellamy’s post mentioning Marina Abramovic: The Artist is Present reminded me of this just the other day. Months ago my friends’ reports on that show, as well as the NYTimes publicity photos of the works’ reenactors made me feel sad and skeptical. The fact that Dodie has been to NYC twice without seeing the Abramovic show made some perverse sense to me. Most of us fans and students of Abramovic have never seen those performed pieces, though we saw the videos of them, and we did not feel deprived of some deeper understanding of the works. To me, they had always seemed designed for the camera, anyway. What do those videos mean, now that the pieces have been re-enacted, with new bodies, and on view full-time in a museum gallery? Are videos of performances no longer “real” enough for museum viewers? Or is it that $20 is too much admission to charge without showing something that looks like the museum paid a lot to have it there? Dear Reader, I truly welcome your response to these questions. 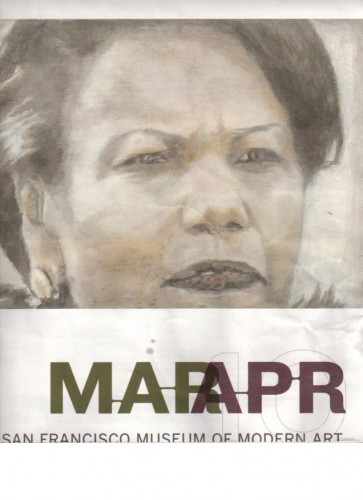 The calendar circular that was in the mail, on my table, in my bag, etc.

In the case of Tuymans, I did actually see the show, though first I saw the Condee image about a million times. Even considering all 8 years of the Bush presidency, I’m sure I’ve looked at this photo of a Tuymans painting of a photo of Condoleezza Rice more times than any other image of the former Secretary of State, and certainly thought about it more. So I was surprised to discover what a weak painting it is when I found it at the end of the exhibition. 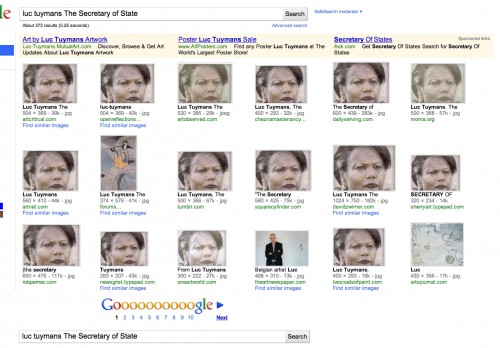 Page one of 373 images retrieved by Google

Back to Dodie for a second: The other reason Dodie’s post on Abramovic struck a chord with me is that I spent way too much time researching various aspects of LT the man, the business, and the art, after seeing the show at SFMOMA. I looked at the websites of the Musee de Beaux Arts, Brussels, MCA Chicago and the Dallas Museum of Art—the museums to which the exhibition is traveling next—to see which LT images they were using to pimp the show (different ones than SFMOMA used). I spoke to a friend who attended Tuymans’s own press tour of his show. I talked to one of the curators of the show. Etc.

And after all that,  I think my initial responses to the work and to the show are still the ones that want to record here. So I will  try to reconstruct my thoughts and questions in SFMOMA’s galleries as I wandered along, a relative newcomer to LT: (that is, I had never seen more than one LT at at time; I had seen more of them on magazine covers than in person; I knew LT has sold a lot of paintings). I know there is no return to innocence. I wasn’t innocent in the first place.  So here goes:

Great to be here on a weekday, not very many people in the galleries. Great idea to show three individual shows within the one larger exhibition—a luxury for the artist and for viewers. This is a very, very smart thing to do, and a good way to reveal how an artist thinks about exhibitions as time-based works of art. If these are such carefully constructed groupings of paintings, why doesn’t Tuymans sell them as installations? Why does he break shows up to sell as separate paintings? Wall label after wall label stresses the so-called political content of these paintings and the conceptual approach of the practice. Why are the artists’ economic decisions not discussed in these labels? 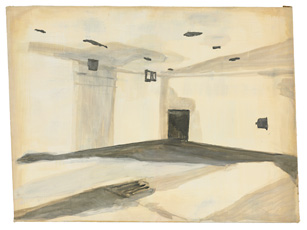 Gaskamer is a phenomenal painting—the relationship between title and object and the image it was derived from is both complex and brutally simple. Without the title, it’s nothing. How will these paintings mean to future generations, to people who did not grow up in the shadow of the Holocaust, or European colonialism? Are there, or will there ever be such people? These paintings are so luscious. They are soooooo much about paint, about white paint, and big brushes. And transparency, and color, even when there appears to be so little of it. The subtlety of color is glorious! Wow. They are so pretty, all the more pretty the closer you get. Why does LT make paintings of buttonholes and orchids and dictators? Evil is banal? Which ones start as photographs, or do they all? There is something really cruel here. There is something in this work that is very, very cruel. WHAT IS IT??? Maybe cruelty IS the subject of the work. Maybe Tuymans is a cruel man who loves beautiful painting? 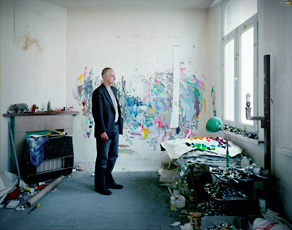 Tuymans in his studio, an image posted on SFMOMA’s website

Doesn’t the bravado and theatricality of LT’s rule of completing a painting in one sitting contradict the claim that he’s a conceptualist with no interest in the romantic myth of the painter? What happens to the rule now that he’s making bigger paintings? Will he change the rule? Did that rule go stale a while ago? Where does he go from here? Why can’t wall labels ask questions like that? Do these paintings sell so well because beneath their manifest content their vision of the world is actually rather ambiguous, and all this happens in coats of creamy paint? Do we like to be reminded of cruelty not only so we prevent it from happening but also because it is in our nature?