Five questions to SFMOMA artists, staff, or guests.  John Davis is an artist and filmmaker who lives in the Napa valley. John’s film Mark You Make Believe My Dear, Yes is currently on view at the museum as part of the Long Play: Bruce Conner and the Singles Collection exhibition. SFMOMA is also lucky to have John on-call as  projectionist, operations guy and all around get-it-done type. 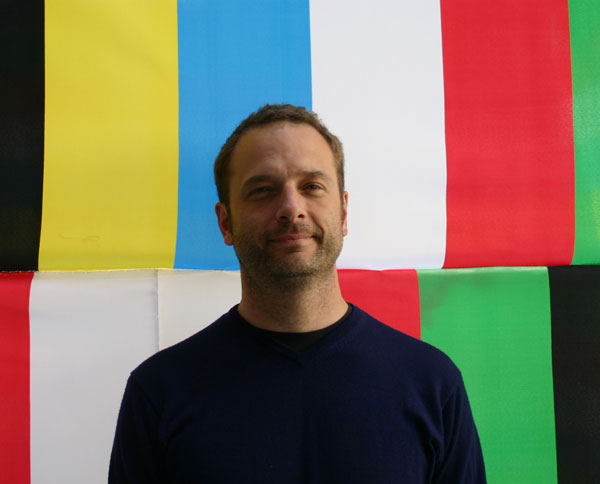 John Davis in front of the Birthday Bash tenting at SFMOMA

This would be before the oil spill. When I was young my uncle had a house on the Gulf of Mexico in Alabama and we used to go down there and catch seafood on his old boat. My aunt would make this really crazy gumbo so I’d probably try to replicate her gumbo. It was the freshest, most amazing thing.  I’d serve that in that setting because it was such a lovely context. The first person who comes to mind is Orson Welles. I have so many questions about him, how he achieved what he did and how he thought about himself in relationship to cinema and art and theater. I’d like to ask him about all his films and the ones in particular where there’s footage that’s been lost or films that were unfinished. I’d like to pick Orson Welles’s brain.

I like to listen to a lot of early indigenous, American, folk, Appalachian music. In particular I find it energizes me. Lots of different types of music give me a kind of levity and energy. The traditional, earliest recorded, field recorded, indigenous country folk, mountain music is what I put on most.

I carry my girlfriend Chris with me. In my heart.

I have this little metric allen key set that’s perfect for my bike. I can pretty much take apart my bike with this one little tool. It’s probably the thing I use the most. It’s the most useful all-in-one tool.

About my film that’s playing. I was fortunate to go to Eastern Europe a couple different times over the course of a couple years and I met a guy—he was actually interviewing me for the BBC—who told me about the collection of old Soviet propaganda films he had acquired at the end of the Soviet occupation (this was in Moldova). There was all this left over Soviet stuff that nobody wanted. He had all these films and said if I wanted to see them I could and was welcome to copy them. I had access to video equipment and so I dubbed a bunch of this stuff and in particular the footage that the film upstairs is comprised of. It’s a Soviet propaganda piece that’s about the Pentagon and U.S. imperialism and meddling in world affairs and it had this anti-Zionist take to it as well—it made all these associations between U.S. imperialism and Israel—basically demonizing the U.S. and saying it was the major threat to the Soviet Union. This film was directed at the Pentagon as a starting point and just went off on all these other tangential things. What I found so interesting about it was that it was basically a subversive montage. The version that’s up is about 20 minutes from the film that is largely unedited by me. I added some sound and dialogue to it to shift the context and the meaning a little bit, but ultimately it’s just a really interesting subversive take on American cultural politics and society. I found that really interesting, so I made a film about it and here it is in the museum. I think it references Bruce Conner in that it’s found footage.

John Davis’s film can be seen in the 4th floor media galleries at SFMOMA through this Sunday, May 23rd as part of the Long Play: Bruce Conner and the Singles Collection exhibition.  More on John’s film/video, music and photography can be found here.