I read in The New York Times that the American artist Deborah Remington died last week, nearly 80; what a wave of regret and desolation blew through me when I read these words. And yet I can say I had a grand encounter with her, just last year. Yes, I met her but once yet it was unforgettable.

I was writing a biography of the California poet Jack Spicer (1925-1965) when I first heard her name. She was one of the young bohemians who started the “6 Gallery,” in the early 1950s, a legendary space both in California art and poetry. Deborah Remington was the grandniece of the Western painter Frederic Remington, and partook in something of his long view and historical sense. She came to the California School of Fine Arts (now SFAI) from Southern California with a group of young friends, and met Spicer there: he was their teacher, taught them history, English, “the humanities.” 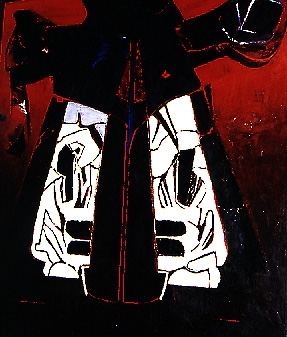 The San Francisco Museum of Modern Art owns two of Deborah Remington’s large paintings. This one is Statement, from 1963.

Teacher and students, impatient with the conventional gallery system, opened a place on the site of the old King Ubu space on Fillmore. Over the next few years it became the epicenter for the new painting, sculpture, and what you would today call multimedia experiments. Allen Ginsberg gave a famous reading at the gallery in October 1955, premiering his controversial poem Howl. At the time I started working on the biography, one of the “6,” Hayward King, had already passed on, but I managed to interview several others of the group, and put together a decent enough account of Spicer’s work with the gallery. But in the back of my mind, like all biographers I’m sure, there was always this feeling that, oh well, too bad I didn’t try harder to find Deborah Remington! But she had moved to New York, I didn’t have her number, oh, I had lots of half-assed excuses.

Ten years later Peter Gizzi and I edited Spicer’s collected poems, and the idea was to have a reading on each coast from the book. Here in San Francisco we had one at the main library, inviting a dozen poets and artists who had—not necessarily known Spicer, for their number was shrinking every year—but who had been influenced by him—young, old, middle-aged, men, women, straight, gay, a little of this and that the good old San Francisco way. Our New York event was a co-production of two estimable NYC non-profits, Poets House and the Poetry Project at St. Mark’s Church in the Bowery. At the Poetry Project, Stacy Szymaszek, its Executive Director, asked me which New Yorkers I’d like to see at the reading—now rather a grand affair with a mini-conference attached. An ancient memory awoke in me, “I always wanted to interview Deborah Remington,” I sighed. “Who?” asked Stacy. I tried to explain, but Stacy soon quieted me. “Sssh, sssh, sssh, we’ll find her.”

To my surprise, Remington agreed to participate in our tribute to Spicer, but asked to read a poem, she wouldn’t. “I would feel stupid,” she said. “I’m not a poet.” “Okay, so how about I interview you, live, on stage, and you could give me all your memories of Spicer being your teacher et cetera?” “In the middle of everyone else getting up and reading his poems? Sure, why not?” She made it so easy. Maybe she liked doing something different than the others, the way she just loved being the only woman in the “6.” I apologized for not having found her twenty years before. “You could have, very easily,” she said. “I’ve been in the same apartment in New York since 1967.”

We devised a method whereby I would “pre-interview” her, by phone, and try to condense her memories into some quick zippy sound bites that would impress out audience, for we’d been scheduled for only ten minutes to complete our interview. I was nervous speaking with her on the phone. She told me that, contrary to what I thought, she was far younger than anyone else in the Six. She had graduated from high school early, and was only 16 or something when she started at the Art Institute, whereas the boys she joined up with had delayed their educations by serving in Korea so they were all much older than she. I warmed up to her instantly, and after a few hours and many e-mails back and forth we agreed to do our interview with bullet points, one, two, three memories; some general reflections on California art; one further memory; what was it like to be a woman artist in a benighted time for women? Perhaps one final amusing anecdote. It was going to be great. 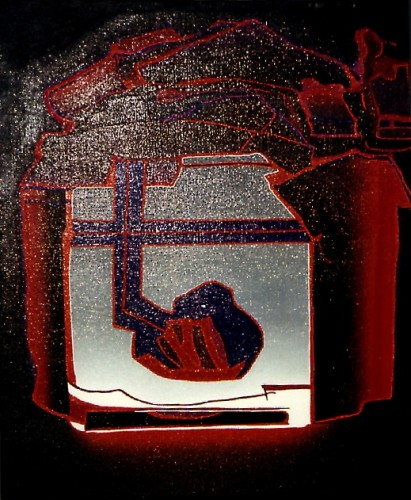 Deborah Remington, Untitled (1966), from the collection of SFMoMA.

Cut to May 15th, 2009, in New York, the evening of our show, Stacy asked me if I had heard from Remington. (To preserve the secrecy of her appearance, we spoke of her in code, code name Remington Steele, like the corny 80s TV show.) “I haven’t, but I’m sure she’ll be here.” But then doubt set in. We had scheduled her for a beauty spot: she and I were to mount the stage as the first act in the second half of the program, right after the intermission. But where was she? I didn’t even know what she looked like, not really, though her website had some old photos and I myself owned a clutch of pictures of her from when she was young and in full beat queen regalia, but this was 55 years later—she must have changed, everyone does! A handful of old women dotted the crowd. We surveyed them with skeptic eyes. Could that old lady, with the bare feet and the patched shawl and the wild gray Brunnhilda hair, be Deborah Remington? “I don’t know, Stacy, I just thought she’d take care of herself better than that.” “I’ll ask her. Pardon, are you Deborah Remington?” Pause. “No, she says she has no name, she’s a being from another planet.” “I didn’t think she was her.” Even the oldest of the old-timers we had gathered at the Project were too young to have known Deborah Remington: Basil King, George Stanley, Martha King, all of them had come onto the SF scene after Deborah Remington had already left for Japan. Finally we decided maybe Remington was sick or something. The program began and I just left it up to the gods.

The auditorium was packed and I guess I got caught up, kind of forgot. Welbutrin will do that. Towards the end of the first act, I noticed hands moving in my row—someone was passing a note to me. I unfolded the paper. Stacy had scrawled, “Remington Steele has landed!”

“Pardon me, pardon me, pardon me,” I kept excusing myself. Finally I scrambled back to the lobby. My brow furrowed once more. I didn’t see any old lady. There was just one woman there, exquisitely dressed, made up, coiffured. A woman younger than I surely, sitting in a chair directly under the most beautiful golden light. “Where is she?” I asked Stacy, frightened that Remington had come and not liked what she had seen ,and departed. “Kevin, this is Deborah Remington,” she said, indicating the seated, and remarkably composed artist. “Is that really you?” I asked Deborah Remington. She shook my hand and I started to babble. She explained that she was only able to appear for half an hour for a friend was having a dinner party in her honor and she had a car waiting outside to take her back to the party. A weak half-smile, half regret, half pride, crossed her face and I had the impression people gave parties for her constantly—why? Because she was so fabulous. She had that Lauren Bacall thing going on of ageless grace and élan. Luckily I had the presence of mind to take some pictures of her, real quick. And I got her to sign my autograph book. And then up on the stage Stacy was announcing to the crowd a surprise appearance by a living legend—one of the “6” from the Six Gallery—Stagehands had rearranged the stage to look like a talk show setup with two chairs, a little lamp, a bowl of flowers. I took Deborah Remington’s hand, we walked down the main aisle like a bride and groom, we sat down in our chairs, and she killed them. Just killed them. Afterwards people were like, “Oh my God,” and everyone wanted to meet her, but she had slipped back into the night, into her car, and that was my meeting with her, the most vibrant and young person in the room that night. 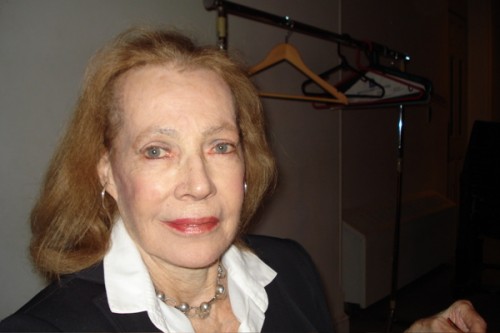 Roberta Smith’s obituary—from which you can get a general picture of Remington’s career in art—tells us that she had been lying about her age for many years, that she wasn’t the teenage prodigy she claimed. What can I say? I fell for her, but good. Who was it said, Brightness falls from the air; queens have died, young and fair?