Wednesday, May 5: I’m on a San Francisco-bound plane, whizzing above the clouds at 440 mph. I’m avoiding writing my next Open Space blog post because I’ve made such a big deal out of it—hours of research, pages of notes, contextualizing up the wazoo. I’ve just spent four days in New York City, the second visit where I didn’t go see the Marina Abramovic show at the MoMA. But I’ve had many discussions with people who have seen the show. Someone told me that some guy grabbed the ass of one of the naked performers, and that guy was banned from the museum for forever. Somebody else said that they hired temps to restage Abramovic’s famous pieces. A group of us were in a Korean restaurant and Eileen Myles cracked, “What used to be performance art is now a temp job.” Person after person has called the show a big celebrity sellout. Then last night at Cafe Orlin in the East Village, Sarah Schulman said she loved it, particularly Abramovic’s day in, day out performance where she sits in a chair and people line up to sit, one at a time, in the chair facing her. As Sarah described it, when it’s your turn to sit down, you and Abramovic look at each other until either you get up or she turns away. A person could sit there for a minute or it could go on for hours. Sarah’s gone twice and she likes to position herself behind the person sitting in the chair so she can see Abramovic. Abramovic doesn’t make eye contact. Her face is totally blank. Sarah says she gives the person absolutely nothing. A powerful gesture, I think, even though I haven’t seen it. Why haven’t I gone to see it? Maybe it’s because I so enjoy hearing people’s reactions I don’t want to taint them with my own observations? Maybe it’s because I’m a lazy tourist? A couple of years ago I attended Abramovic’s lecture at Stanford. I went with former SFMOMA curator Jill Dawsey, who knows so much about the history of feminist performance art, and it was a perfect evening. Maybe I feel I’ve already done Abramovic.

This coast to coast plane ride is going to be particularly long, over six hours. To avoid unpacking my laptop and working on my next Open Space post, I check out the pay movie offerings. Movie #2 is a romantic comedy starring the actress who played Veronica Mars. I like her, so suddenly my wallet is out and I’m swiping my bank card. Veronica is the youngest curator at a museum which turns out to be the Guggenheim. Portions of the movie are filmed in the museum, and the camera lingers on the Guggenheim signage beside the door. I missed the credits, but I later learn through inventive Googling it’s called When In Rome. Veronica Mars has organized a major museum exhibit around the theme of pain. There’s been some snags concerning the insurance for the crown jewel of the exhibit, and her tyrannical boss, Angelica Huston, threatens that if Veronica screws up this exhibit she’ll never work in the art world again. I’m reminded of SFMOMA’s Apsara DiQuinzio because like Veronica, Apsara is petite, attractive, and a hard working young curator. 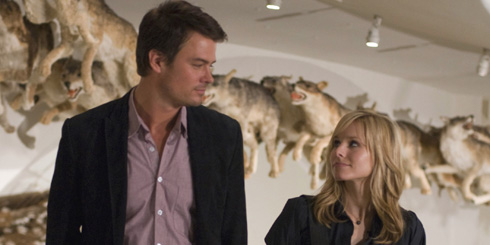 Veronica Mars and her true love at the Guggenheim, standing in front of Cai Guo-Qiang’s installation, Head On, 2006

Veronica’s younger sister is getting married in Italy, and Veronica flies there for 48 hours, where she gets drunk on champagne and wades around in a fountain of Venus, eventually removing several coins that have been tossed into the fountain. Lightning strikes and all these men—the original owners of the coins she’s stolen—fall madly in love with Veronica. Venus has cast a spell on them. At the wedding Veronica also meets her true love, but she keeps fleeing from him because she thinks one of the coins—a poker chip, actually—belongs to him and therefore his love isn’t real. Veronica returns to New York to discover that her assistant has screwed up the insurance and it will be impossible to fly the centerpiece of the exhibit from Australia in time for the opening. Just when all seems lost, Veronica’s true love says he will donate a never before seen photograph by the most famous photographer in the world—it’s of himself at his most painful moment, the moment that ended his career as a professional football player. In the middle of a game it started raining, and a bolt of lightning struck the true love in the neck. I’m not making this up, there’s actually a romantic comedy out there made for curators. I wonder if Apsara or Jill ever found romance at SFMOMA. Of course true love wins in the end, and the opening is such a success the museum gets more financial donations that night than ever before. Mean boss Angelica Huston smiles for the first time in the film and tells Veronica she’s a great curator. 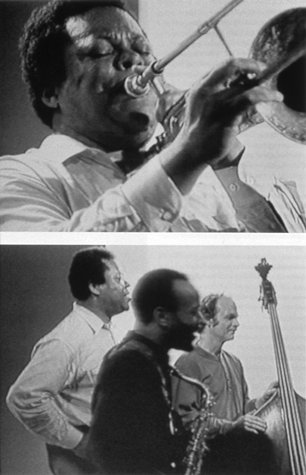 I attended the 1995 grand opening of SFMOMA’s Third Street location, and the wine and glamor was flowing so freely my memory of it is a misty cinematic dream. I remember the atrium being enormous, like three times its current size. The staircase was trimmed in gold, dramatically curving upward, so grand I imagined Ginger Rogers swaying and tapping her way towards me, step by step. Kevin and I went with Vancouver curator Scott Watson and San Francisco artist Nemi Frost. Nemi’s been making paintings in the Bay Area since the Beat Era. Someone told me that she dated Woody Allen and Lenny Bruce. In my dream memory the four of us—Scott, Kevin, Nemi, and I—threw our heads back, shrieking with glee. We ran into photoconceptualist Stan Douglas, and I was thrilled to be at a party that Stan Douglas would fly all the way from Vancouver for. I also remember seeing critic David Bonetti. He was so much fun to play and gossip with at art events, it’s a pity he moved away from us, all the way to St. Louis. The inauguration of SFMOMA was a glorious evening. Veronica Mars’ curatorial triumph at the Guggenheim had nothing on it. In real life, I was so drunk that apparently I had a long, intellectually charged conversation with the artist Cady Noland, but the next day I didn’t remember even shaking her hand. 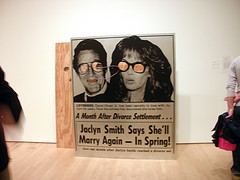 Cady Noland, Enquirer Page with Eyes Cut Out, Template I, 1990