In a recent conversation with SFMOMA curator Gary Garrels I attempted to understand better why the fourth floor Focus on Artists permanent collection installation is so lopsided on the gender front: 15 male artists own the majority of linear and cubic gallery-feet, 3 female artists have the rest. And of those three women, at least two could be called twofers: they’re the only artists of color in the entire installation, and they’re women!  (Here I am referring to Doris Salcedo and Kara Walker. If, in ignorance, I’ve overlooked someone, please correct me.)

The conversation with Garrels was wide-ranging, but in the end, discouraging on a few fronts. First, Garrels reminded me of some basic premises structuring Focus on Artists,  and explained that a fair number of decisions had been made by other curators before he returned to the museum. SFMOMA’s collection is not a “comprehensive” one, so much as one that has great depth in some areas. With this particular show, one of the goals was to show some of the museum’s “touchstone” works, pieces that represent the collection’s strengths (they’re seminal!) : early Rauschenbergs; Ellsworth Kelly’s early works from Paris, and Clifford Still.  So, the west side of the fourth floor is occupied by “eight American artists whose practice fundamentally impacted the development of abstract art in the United States.”  Garrels explained that since the installation’s logic was to give each artist a full gallery, the problem was primarily that even if there was a woman whose “practice fundamentally impacted the development of abstract art in the United States,” the museum also would have to own enough of those works to fill a gallery. Garrels also cited a more general difficulty: The art world of the 1950s and 60s, like so many other parts of American culture and society, was a man’s world, and there were relatively few women artists working in that period, and even fewer who had any measure of success. What women there were working were also usually occupied by child-rearing,  wifing, or doing day jobs in addition to making art.  This museum in particular has not given itself the job of discovering women artists—that is, of righting, or rewriting history.

Second, Focus on Artists is complemented by the show on the second floor, where there are works by artists, including women, not shown on the fourth floor.  I asked Garrels about Joan Mitchell, an artist I thought might have been an obvious choice for the abstraction galleries. Garrels expressed terrific enthusiasm for Mitchell’s work, and explained that the museum has very little of her work. However, he said, there will be Mitchells on view when the Fisher Collection is installed at the museum in the summer, as a continuation of the 75th anniversary celebration.  Jay de Feo might have made sense here, too, but her work is already downstairs on 2, and anyway the museum doesn’t own enough “great” paintings to have been able to fill a gallery. The museum owns only one Lee Krasner. She’s better represented in the Fisher collection, so a few of those will be on view this summer too.

I asked Garrels if there are women artists he would have liked to include in this current installation  if they were represented by works in the collection. Mitchell, he said. I suggested that another way to do this show might have been to include works from the 1970s as an interesting transition point between abstraction and the photography-bound works on the east side of the fourth floor, and also as a way to show women artists whose practice “fundamentally impacted the development” of post-modern art in the United States. In my imagination, the museum owns lots of Hesses — (because of the fabulous Hesse show at SFMOMA in 2002) for example, though in fact there are very few. But the ones it does own  might have been a place to start. Or, lets say, Anne Truitt. Or Agnes Martin. According to Garrels, the 70s are not well represented by SFMOMA’s collection thus far. The Fishers had the perspicacity to buy a lot of Martin, though, so we’ll see a whole room of them in the summer show. Truitt has never had a museum show on the west coast. In fact, there has been only one retrospective of her work since 1973. More on Truitt in my next post.

Early in our conversation, Garrels averred that there are so many strong women artists working today, that he can tend to forget that the stakes are still uneven for male and female artists. Commercial and museum show opportunities for women are still fewer and farther between than those for male artists, often by a factor of 10 or more.  And despite the fact that Focus on Artists, the east side, is comprised of artists whose work  “has signaled a shift toward more psychological, social, and historical content in art,” and done so, often, through incorporating photography in their work, the following artists do not have solo rooms in Focus on Artists, though they are represented in SFMOMA’s holdings:  Cindy Sherman; Adrian Piper; Sherrie Levine; Pipilotti Rist; Ana Mendieta; Martha Rosler.

To end this post on an up note, I’m going to make my own fantasy shopping list, so that at SFMOMA’s 100 year anniversary, things might look a little different for women, and for us all. 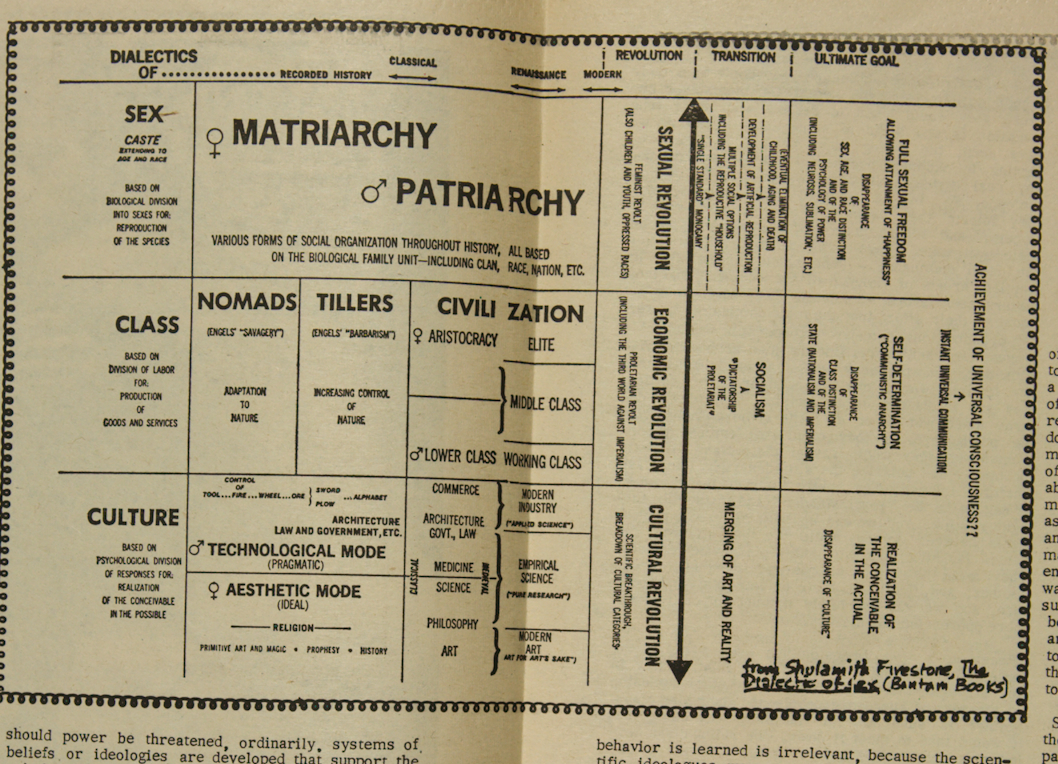 Shulamith Firestone, Diagram from The Dialectic of Sex, reprinted in The Effeminist magazine