This morning I received an interesting note from Julian Myers concerning the name Veronica:

My dictionary tells me that the name, Veronica, is from Greek: pherein nike (she who brings victory), which leads me instantly here: 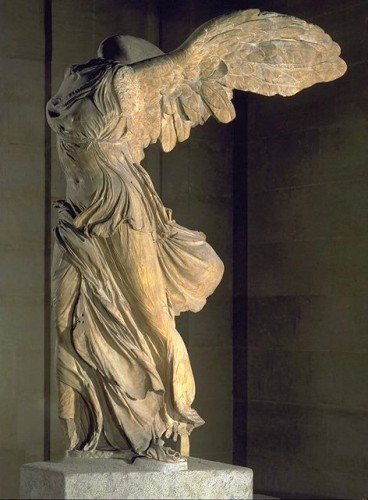 This puts an exciting new spin on DeFeo’s painting—and Nike’s transhuman wings are so perfect for the way I was seeing The Veronica.

In my (over)researching for this post, I came across various meanings for “veronica.” A spiky blue flower. A bullfighting maneuver in which the sweep of the bullfighter’s cape mimics St. Veronica’s gesture in wiping Christ’s face. Some say there never was a St. Veronica, that “Veronica” comes from vera (true) and icon (image), that vera + icon means true image and is the cloth itself that Christ’s face reputedly appeared on. Others say that vera + icon is an unlikely commingling of Latin and Greek, pure bunk. But I never came across this Nike association. This is why we need art historians. Thank you Julian!