More on researching the invisible

“Dark matter, the invisible, mysterious material that makes up 22 percent of the stuff in the universe, is one of the great scientific unknowns, a substance nearly six times as abundant as ordinary matter but made up of fundamental particles we haven’t yet identified. And dark matter doesn’t emit light, it doesn’t reflect light, and it doesn’t absorb light. It’s not dark, as the name suggests—dark matter is completely, inherently unseeable.
While we are unable to see dark matter itself, we are able to create maps of it, pinpointing its location by observing the effects of its mass on light from distant galaxies.  Einstein’s general theory of relativity predicts that a massive object will curve the fabric of space, and light will follow this deformed path. So we can look at how light from galaxies has been bent and infer the quantity and location of the matter that did the bending. An international team of astronomers recently used this method to create the first three-dimensional map of the large-scale structure of dark matter, and they released this image earlier this year. 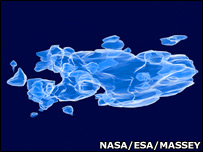 In one sense, the image is categorically sublime. Scientists have taken something that cannot be seen, and they’ve let us see it. They’ve not only increased our knowledge of the large-scale structure of dark matter, they’ve also taken something inherently invisible and given it an accessible beauty. While we used to struggle to conceive of dark matter, using phrases like “pervasive stuff” and “ineffable material” to force it into the confines of language, we can now imagine it as a grand network with dense hubs and small offshoot islands.
Dark matter is nearly collisionless—individual particles don’t bounce off of one another or off of ordinary matter; almost all of them just pass through as if nothing were there. We are constantly being irradiated by the billions of dark matter particles that pass through our bodies every second, but these particles will never touch our flesh or our organs. Were we able to see dark matter, we would be justified in assuming we could interact with it. So when we look at an image and perceive dark matter as a seeable substance, we implicitly imbue it with a property it doesn’t have.
Our eyes will never be as big as our science. Our visual system is the best source of intuitive information, the kind of stuff that we need to survive, but it gives us only a shadow of the greater world.
To see the unseeable is glorious and awe-inspiring, it’s disquieting and misleading, it makes us question our ability to understand the world and allows us to marvel at our ability to learn so much despite our limitations. And, in some way, it’s what we’ve been doing all along. Scientists and other curious people have always needed to turn unseeable phenomena into visuals. Experimentation is the art of prodding some invisible aspect of nature and turning its response into something we can see. Whether we watch two balls dropped from a tower hit the ground at the same time or observe flashes of light as an alpha particle is scattered off of a gold nucleus onto a screen, we bring the world to us, giving ourselves a simple image that lets us learn about a universe that doesn’t care whether or not we can understand it.”
— from Seeing the Unseeable by Maggie Wittlin in Seed Magazine, August 2007

Ned Kahn\’s Wind Veil is an example of an artist making the invisible visible.

In 2007 Susanne Cockrell and I were asked to come up with a theme for a juried invitational for the Lab, a San Francisco artist space. This is the text we put out:
Call for Proposals: Renny Pritikin and Susanne Cockrell 2007
Look Forward to Seeing It: The Discipline of Anticipation

The situation of the artist in America is not one in which the public is hostile to contemporary art, so much as it is unengaged with it. The emerging artist is thrown back on her own devices– ”Why do I do this? For my peers, for those who care about art, or for myself?” What can we ascertain about why artists make work for themselves? One answer might be that artists have a yearning to see what something would look like, referring to visual inventions that they have never seen before except in their imaginations. The curators invite artists to submit works that use anticipation–their own and the viewers’–as a means to see the world anew every day.

What we can’t see but want to see is the art impulse.